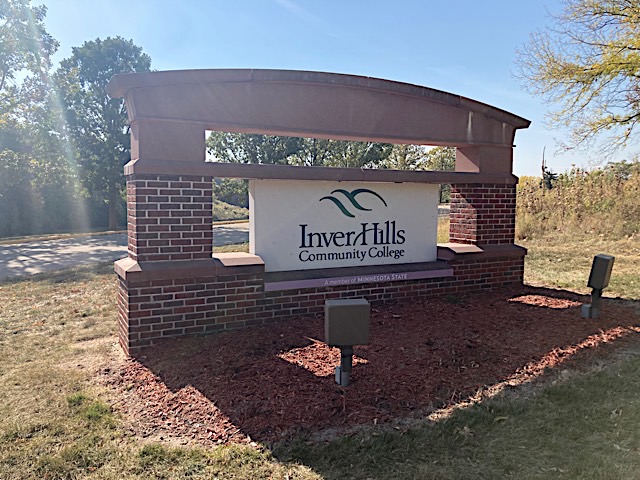 What would be more meaningful than to open up an on-campus LGBTQ resource center?

That was what exactly happened at Inver Hills Community College in Inver Grove Heights. The brand new Prism Center of Gender and Sexuality is located inside the College Center building just off of the Café and Lounge area. The space is easily accessible to students who seek support, resources, and just a space to be themselves.

All of this was the brainchild of Dr. Amy Zsohar, faculty member in the Communications Department and the advisor to the campus LGBT+ Club. While the club has been around for 15 years, Dr. Zsohar had been advising the club for the past six.

The idea of opening up an on-campus resource center came just a few years ago while Dr. Zsohar attended a meeting of LGBTQ leaders across the Minnesota State College and University system. “While we were there talking,” Dr. Zsohar explained, “I realized how many schools had some sort of center like this around gender and sexuality, but also what they had that we didn’t. And I came back to the school after that meeting and met with the then Associate Vice President, Michael Birchard (now Vice President of Equity and Inclusion at the Mitchell Hamline College of Law). And he and I met, and I was like, ‘Here’s all the things that we don’t have that other schools do.’ And his response was, ‘Well, then let’s change that.’”

Birchard asked Dr. Zsohar to “write an open letter to the college asking for what [the campus LGBTQ community] wanted, and we did.” After framing key changes across campus, including a gender-neutral locker room, gender-neutral bathrooms, and safe space training for faculty and staff, the Prism Center was established.

One of the benefactors of the Prism Center will be the students at Inver Hills Community College. One of those is LGBT+ Club board member Jennifer LaBounty. LaBounty said “I think this is really just step one in creating a space in every school, hopefully, for equality. And not just for LGBT students, but for students of every kind, for students of color, for students who are immigrants, for students who just need extra support or extra love in some area.”

Another LGBT+ Club board member, Olivia Aura-Juarez, adds that “there’s not enough good, safe places, for people nowadays. I think a lot of people are being prejudiced and just going against a lot of other people for no reason. And I think with this safe space, a lot of people will build a community that’s really great and loving.”

The Prism Center could have opened sooner. The COVID-19 Pandemic delayed plans to do so. However, Dr. Zsohar and the LGBT+ Club pressed on to get the resource center opened on National Coming Out Day. Not just for the campus community, but as a beacon for its location just southeast of downtown Saint Paul.

“Most of the resources and everything are in The Cities,” said Dr. Zsohar, “and we are [in the] suburbs. We’re definitely south. And, I think that it’s a matter of acknowledging the fact that we’re everywhere, and we need to feel like we belong everywhere. And for a school like Inver Hills, that is really fighting to be a place of welcoming, for them to step up and just be like, ‘let’s make this happen,’ because we are one of the few two-year schools that has a center like this.”

LGBT+ Club board member Mae Lemm added: “When this center became a thing and we got the go ahead to do so and we started this whole process, it became that beacon. It became that light that said, ‘hey, we are here, and we are not just in the Twin Cities, we are everywhere.’ It doesn’t matter where you are, you could be outside of Minnesota, you could be in another country, you could be anywhere in the world, and you could be part of the community.

What Inver Hills Community College has a resource center that is needed in its place. It has already made its presenceknown. At the opening event, the last speaker of the grand opening program, a non-binary student named Sam, came up to the microphone and spoke their truth – coming out in front of the assembled crowd including college President Michael Berndt. “It’s the reason I fight,” said Dr. Zsohar. “It’s the reason we have been fighting for this. The reason it matters is the number of young people who just need to know they belong and that they’re safe to be themselves. I was not expecting that at all and feel like once I’m able to decompress a little bit from the day, that’s going to be the moment that’s just going to keep me fighting tomorrow.”

As for what’s next, LGBT+ Club board member Farin Reynolds stated that “the next step is probably just improving it, getting more furniture, more resources, including more people into it, and showing that yes, we are here, and we are going to continue to be here. Because after all, very small community college, but even here there’s so many people and there’s still more that we can do.”

Another next step for the Prism Center will include our LGBTQ community at large. Dr. Zsohar is looking for volunteers to “come in and hang out with our students and just be a presence to show the students that, right, there are people outside of this college who see the value of them.” If you can spare a couple of hours, contact Dr. Zsohar at Inver Hills Community College.”