Melanie Willingham-Jaggers: Beauty in the Margins 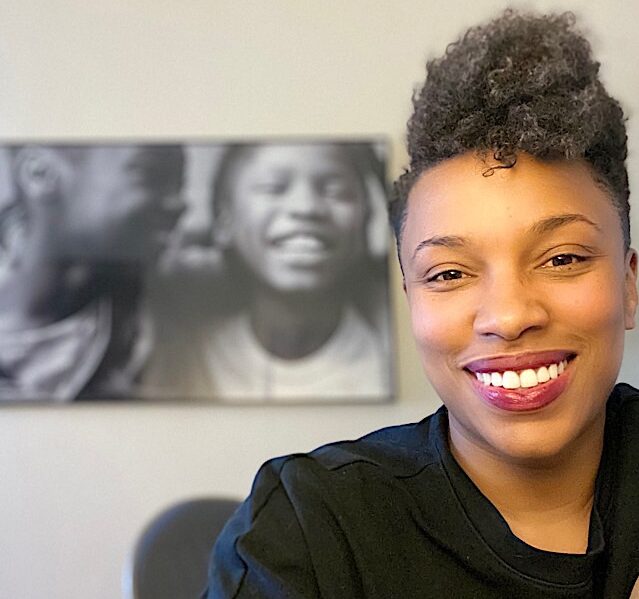 In 1990, a group of teachers formed an organization called GLSEN (pronounced like “glisten”) with the intention of making schools a safer place for LGBTQ children. Over forty years later, GLSEN has authored resources for educators, conducted research on LGBTQ students, lobbied Congress for safer schools, and has been instrumental in the creation of GSAs (gay straight alliances) in schools across the country. Today there are 43 chapters in 30 states with over 1.5 million people in the GLSEN network.

This year, GLSEN is excited to announce Melanie Willingham-Jaggers as Executive Director – the organization’s first black, nonbinary leader. Melanie has been involved in social justice activism since they were in high school, when Proposition 21, or the Juvenile Justice Crime Bill, was introduced and ultimately passed in California. After earning their BA in Politics, Peace, and Justice Studies at the University of San Francisco and their MA in Applied Theater at the City University of New York’s School of Professional Studies, Melanie continued to focus on community organizing by working with the Audre Lorde Project, Cornell University, and by lecturing as an adjunct professor at CUNY. We spoke on a chilly Tuesday morning about how far the LGBTQ community has come, and how GLSEN – with Melanie at the helm – is working to make sure every student feels safe and validated at school.

GLSEN was founded in 1990. What are some differences between then and now, in regards to LGBTQ students?

Melanie Willingham-Jaggers: The broad societal assertion then was that gay kids didn’t exist. Now we know that queer kids exist, always have. We know that there is a trend in a positive direction in terms of bullying, harassment, and assault that young queer kids face in school, so we are trending in the right direction toward lower instances of harassment, assault, and other types of violence. However, it’s still far too high. We were seeing a precipitous decline over time since 1999 until about 2016-2017. What we’re seeing now in schools is a very stubborn, persistent level of bullying, harassment, and targeting that’s happening.

I do think that the advancement of these deeply violent, anti-queer, anti-BIPOC, anti-people of color, initiatives that are being pushed in schools, along with this COVID misinformation, is turning everything into a culture war issue, whether it’s history, anatomy, or science about how germs are spread. I think we’re really in a moment. While the trends are generally good over time, we can’t take the eye off the ball, because the other side, the side that’s against queer people is really – I think they have found a toe hold and they’re feeling confident about what they’ll be able to accomplish, and that is a direct inverse relationship to what is good for queer kids, and what’s good for all kids.

What is something that GLSEN is doing that helps build safety?

MWJ: A permanent [program] is our rainbow library. A rainbow library is a library in a box. It’s a collection of about ten books that are age appropriate, from K-12, so there’s a book in there for every young person, and it is literature that’s representative. It’s inclusive of young people and how they exist: LGBTQ plus inclusive, it’s diverse in terms of race, experience, and location, and it’s often stories told about queer kids by queer people themselves.

We have thousands of rainbow libraries across the country, with hundreds more, thousands more, requests coming in all the time. And so even as these laws are being made at state houses – and these are terrible laws that are terrible for our children, for education as a whole, and frankly have a super cynical view of what education should be – at the same time, we are on the ground looking to meet a need that is deep, wide, and vast. That to me is very encouraging. It lets me know that we’re doing the right thing at the right time. We are expanding the diversity of things that young people can read about themselves, their communities, or about the communities of their friends and loved ones, even as the opposition is getting more explicit about its hopes to erase queer stories and queer representation in literature.

GLSEN will always be a place that advocates for the inclusion, safety, and affirmation of queer kids in schools. Those kids are every single kid – they’re rural, they’re suburban, they’re urban, they’re gender diverse, they’re cisgender, they’re white, they’re kids of color, they’re immigrants – our kids are every kid. And while we can’t do everything, we can see every child. It’s every kid who is queer, and kids who are queer are from every single community, language group, race, and geography across the country.

Here in Minneapolis, there is a strong history of queer theater, dance, and the arts. Your MA is in applied theater. What is applied theater, and how do the arts function as a catalyst for social change?

MWJ: Applied theater is using the tools of theater to do something besides theater. It’s really about making art for social change – that’s the whole point of applied theater. Learning best happens when folks feel safe. That’s the baseline. It’s impossible for your mind, for your body, for your heart, and for your emotions, to be present for learning when you don’t feel safe. So the foundation of what we do at GLSEN is really about making sure that young people feel safe, affirmed, and included so they can be available to learn in school.

What enriches learning and makes it stick with you, what makes it truly a liberatory experience, is the play part of it. Animals, [including] human animals, learn through play. So what applied theater and the arts offer us is a way to learn about our world, to try on a different experience, to go into the life or the world of another that we might not have access to, and to see it from their perspective. Think about when you see a piece of art that really resonates with you. The way that you feel afterwards is opened up, right? People actually feel opened up after they see art, opened up to a different perspective, to a different truth that maybe they haven’t understood before.

I think that is deeply important for people of all ages. It’s also important for our democracy. Right now, our opposition is seeking to shrink what we think is possible. They want us to think that there are only two genders, that there’s only one way to be an adult and that’s heterosexual, only one way to have a body which is an able body; they want us to think there’s only one way to live, and that’s by working and grinding forty, sixty plus hours a week for very low wages. What education does is expand our understanding of what is possible, and that is necessary now – vital now – more than ever.

This is a really scary time. Find your people, create safety together, and then plug into organizations. It is really important that we stay safe, that we stay as sane as possible, and that we connect with others. What our enemies want us to do is feel alone, like we’re the only ones, like we’re wrong, and we aren’t. We aren’t alone, we aren’t the only ones, and there’s nothing wrong with us. We actually have a beautiful vision for the future.