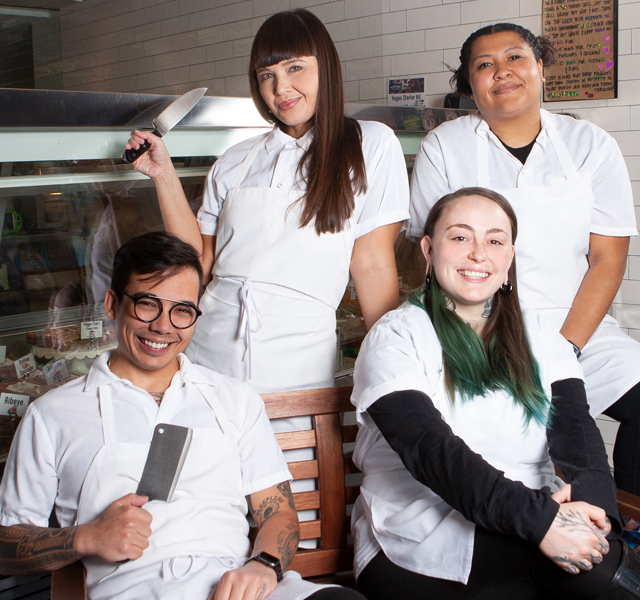 Dining Out For Life is “a 24 hour dining fundraiser for AIDS service organizations in cities all over the world,” according to the event’s website. “Each year, more than 50 local HIV service organizations partner with 2,400+ participating restaurants, 4,100+ volunteers, and 300,000+ diners to raise over $4.5 million for people living with HIV/AIDS in the United States and Canada.” That’s a whole lotta dining…and that’s a whole lotta life.

The Twin Cities’ own Aliveness Project has hosted DOFL since CompuServe was considered cutting edge. A Twin Cities institution, the Aliveness Project describes itself as “a Minnesota nonprofit organization and community center that facilitates community building, offers nutrition and wellness services, and links members to resources to lead healthy, self-directed lives.”

Annually scheduled for a Thursday, this year’s Dining Out For Life is a straightforward as a wasabi chaser: on April 28, 2022, dozens of Twin Cities restaurants—www.diningoutforlifemn.org—will donate a percentage of that date’s profits (AKA Your Bill, along with all the other bills) to the Aliveness Project.  If you decide that appetizers and two desserts in addition to your entree aren’t for you, not really, but for the cause, your therapist might later accuse you of rationalization, but your compadres will probably applaud you in the moment.

Two veterans of the event are longtime Twin Cities residents Bill Hauge and TJ Danielson. “We would get large groups of friends together and make an evening of it,” they remember, recounting their past DOFL adventures. “We felt it was a great way to support our community while spending a nice evening with friends. It was awesome!”

Each participating restaurant decides how much of the 24-hour term’s profits will benefit the Aliveness Project, ranging from 20% to 100%, a fact not lost on Hauge who notes, “Besides going to restaurants we enjoyed, we would select the restaurant that donated the highest percentage of their profits to The Aliveness Project.”

One of six participating establishments to donate all of April 28’s profit to the cause is the Herbivorous Butcher, America’s first vegan butcher shop and deli. The reason behind that generosity is intensely personal to co-owner Aubry Walch who testifies thusly: “I lost someone very close to me to HIV many years ago because of a stigma; they were too afraid to even go to a doctor until it was too late.”

Walch sees her support of Dining Out For Life as the best way to prevent such too late moments from blighting the community’s future. “The work and education that the Aliveness Project and Dining out for Life does is so incredibly important,” she observes. “And I hope through their work that we don’t lose any more people to the stigma.”

The term “butcher” packs plenty of stigma of its own, a stigma unpacked by Walch and her co-owning brother, Kale. Declares the Herbivorous Butcher’s website, “We have carefully crafted 100% vegan, cruelty-free meat and cheese alternatives that capture the best flavors, textures, and nutrients most people are used to without their negative impacts on health, animals, and the environment.”

If the siblings’ collaboration sounds like the coney-est of Zen k?ans, it’s a paradox they embrace. “We’re passionate about creating meat-free meats and cheese-free cheeses that taste like no other vegan product on the market,” their website elaborates. “We’ve been developing our recipes for years and are confident that after one sampling you’ll be hooked!”

Support for DOFL predates the foundation of the siblings’ own establishment. “Before we owned a business, we always went out to eat at participating restaurants for Dining Out for Life,” Aubry Walch affirms. “Once we had a way to help raise funds as a business we jumped on the opportunity as soon as we could. We’re excited to add Herbie Butcher’s Fried Chicken to the mix this year.”

If the Herbivorous Butcher’s 2021 DOFL experience is any indicator, that new product will debut in front of a large audience. “Last year, we had approximately one hundred customers visit us for Dining Out For Life, which is almost twice as many people as usual on Thursdays,” says Aubry Walch. “Our customers are amazingly diverse. We see people of every age, race, gender, et cetera come through our doors.”

At the Herbivorous Butcher, preparation for Dining Out For Life looks surprisingly like preparation for any other day. “Since we have always operated as a take-out spot, we don’t have to alter too much of what we do,” Walch reports. “We mainly make sure to have extra sandwiches on hand because they fly out the door.”

Of course, in the still churning wake of a how-many-letters-are-in-the-Greek-alphabet-anyway pandemic, the definition of “Dining Out” has become nuanced. Many of the participating establishments offer a take out option…which has always been the Herbivorous Butcher’s modus operandi.

Less mastication-oriented means of contributing to Dining Out For Life are at your disposal. Perhaps the most conspicuous of these is the role of ambassador.  Each restaurant is assigned at least one such person, and this assignee’s duties begin well before the event. These duties include liaising between DOFL and the participating restaurant, as well as generally spreading the word about DOFL.

The day of the event, after delivering promotional materials, ambassadors approach tables, hand out brochures, answer questions, accept further donations, and thank guests.  Says TJ Danielson, “We really appreciated the volunteer ambassadors at the restaurant. The participating restaurants were welcoming and seemed eager to support the effort.”  Other individual volunteer opportunities include photography and material assembly.

Oh, yeah, and if you’re more of a cut-out-the-middle-meal, slice-through-the-Gordian-spaghetti-knot type, or if you’re on some kind of high-mindedhunger strike, you can always simply donate to Dining Out For Life–no one will mind you being a killjoy, so long as you’re a generous killjoy.

But the best way to help is still the most obvious way, whether you dine out for business, pleasure, convenience, novelty, reward, or experience…so long as you also dine out for life.  “It is an amazing opportunity to support such a great organization while sharing a meal with friends and family!” Bill Hauge enthuses.  “Get out and participate!”

Dining Out For Life

Dining Out For Life is ® Action Wellness, Philadelphia.