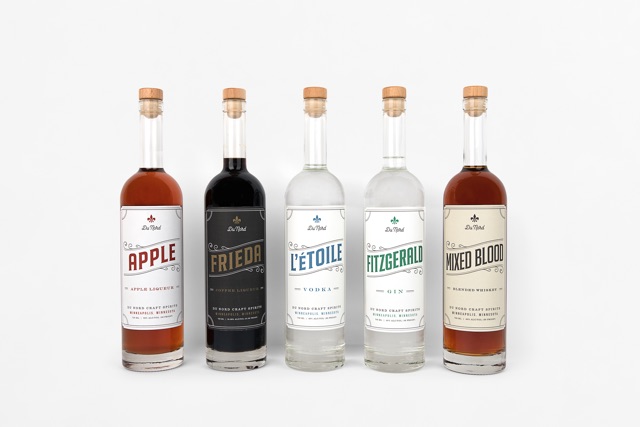 “Anything worth doing is always done with a group of people,” says Chris Montana, owner and founder of Du Nord Craft Spirits. Montana circles back to this theme of team effort and community building constantly—and it is not hard to see why. 2020 dealt Montana’s business a painful one-two punch: the pandemic and an arson attack. These setbacks could have been a death sentence, but instead the Du Nord team grew closer than ever and used their existing business to create a powerful non-profit.

At the start of the 2020 Montana was laying the groundwork with Eat For Equity “to introduce food to Du Nord for the first time.” With plans to launch in late March or early April of 2020, the pandemic could not have been timed worse for Du Nord. “We had been burning cash with the thought that we were about to start earning that back,” explains Montana.

Earning cash back looked increasingly unlikely as people began sheltering in place. Montana struggled to decide what was best for the business and his staff. “As a business owner and a human, I was trying to decide whether the responsibility to provide this workplace should win out over this countervailing issue of the global pandemic.” This was one of Montana’s few fumbles of the year, a moment that he discussed with refreshing candor: “The mistake there was that [it] wasn’t really my decision to make. I should have talked to my staff…I shouldn’t have been thinking about it by myself.”

After his staff persuaded him that shutting down the cocktail room was the best move, the reality of the pandemic hit. Convinced that his business would not survive the year, Montana decided “If we’re going down – we’re going down swinging” and the Du Nord team started producing sanitizer.

“We didn’t sell any of it,” Montana says. Instead, Du Nord donated what they made to Meals on Wheels and first responders. “Considering what would happen later it was mildly ironic that a lot of it went to police departments.” Eventually word spread and people approached the distillery for sales. “Those sales are the only the reason that we survived.”

The team was still busy producing sanitizer when the protests in response to George Floyd’s murder began. Maria Kustritz, Production Manager, explains “We were bottling sanitizer that day —Chris texted us and said any staff that wanted to leave early to attend the protest would still get paid for their whole day.”

The Du Nord team wanted to do more than just protest, though. They wanted to help. “It was early on in the pandemic,” Kustritz says. “We figured the thing we can do is bring the sanitizer. So there we were, giving out water bottles and hand sanitizer. And then the cops busted out their tear gas.” 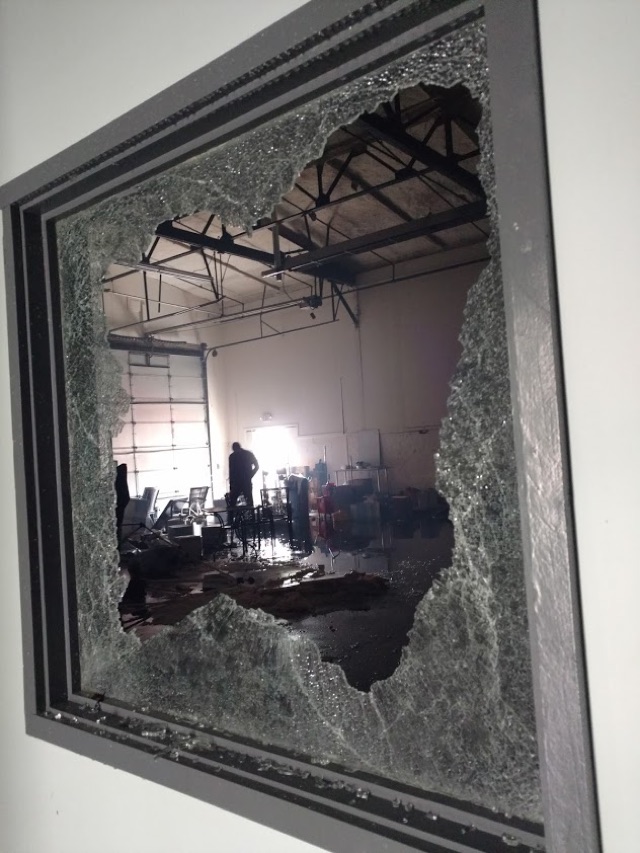 Chris surveys the damage to the warehouse: “He’s such a visionary guy. He definitely sets the tone for everything.” Photo by Du Nord Craft Spirits.

The following night the Du Nord warehouse was set on fire. “A bunch of product was lost. Bottling machines were in there. We lost a bunch of stuff. We also had insurance,” says Montana. “The thing I want to be clear about is that the original distillery was not touched. Not a single thing was touched.” Montana and Kustritz both attribute this to the “Black Owned Business” signs that Kustritz’s girlfriend insisted they put up in the windows. “That week sort of changed a lot for us. Our staff went through a lot together. We got a lot closer,” says Kustritz.

The sense of solidarity the Du Nord team developed that week was mirrored in the outpouring of support in the wake of the fire. “We had 12,000 people from around the world donate to us,” Montana says, awe still audible in his voice all these months later. “It’s not like I have 12,000 friends. People just wanted to be part of helping out.”

As donations poured in, Montana knew that he had an opportunity to do something bigger than just rebuilding what was lost in the fire. He started with three core missions that became the backbone of the Du Nord Foundation: stability through disaster, supporting business ownership and economic prosperity, and investing in rebuilding community through intentional and innovative business development.

“The middle prong is essentially done with because that moment has passed,” Montana says. The Du Nord Foundation is now focused on its first and third goals: stability through disaster and business development.

The primary project of that first prong is the Community Market, which is run full-time by Trica Trowbridge and Jay Henderson. “It is the most active part of Du-Nord foundation,” says Montana. The Community Market is a food shelf with perishables, non-perishables, and household goods. The Community Market offers an easy online shopping experience and in-person pickups. At its peak it processed four hundred families per day, five days a week—and it continues to be a lifeline for many.

The third prong is on the cusp of becoming a reality and is Montana’s passion project. “I’m choosing to focus on businesses development in communities of color,” says Montana. “It’s about who doesn’t have access, so sometimes it’s women or the queer community, too. We’re looking to support business and property ownership.” Montana’s plan is to work as an incubator for businesses, offering access to resources and expertise that marginalized communities have been barred from in the past. 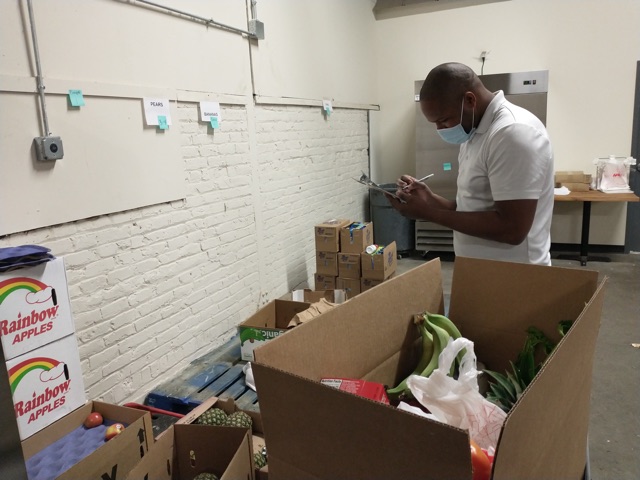 Chris Montana Volunteering at Community Market. “I saw some terrible shit. But then there was the love people were sharing with us and each other. The conversations we’re having now that I didn’t think I’d see in my lifetime.” Photo by Maria Kustritz

NOT JUST THE CHRIS MONTANA SHOW

Montana has built a strong team at Du Nord Craft Spirits and Du Nord Foundation and it is important to him that this work is recognized as the collaborative project that it is. “When these stories get written we get into hero narratives. I see my name an awful lot. What really happened is a community came together.”

Kustritz underlines the same point, saying “Chris knows that he’s the face of Du Nord, but he wants to spread the shine. We’ve grown in the last year and there are a lot more people involved. There are a lot of decision makers at Du Nord.”

Montana and his team are also very aware of how much of their work has only been possible because of their community. “As a company we got a lot of credit for what other people did,” Montana says. “We had 300 volunteers. People came in and gave all of their time. That’s who really did it.” 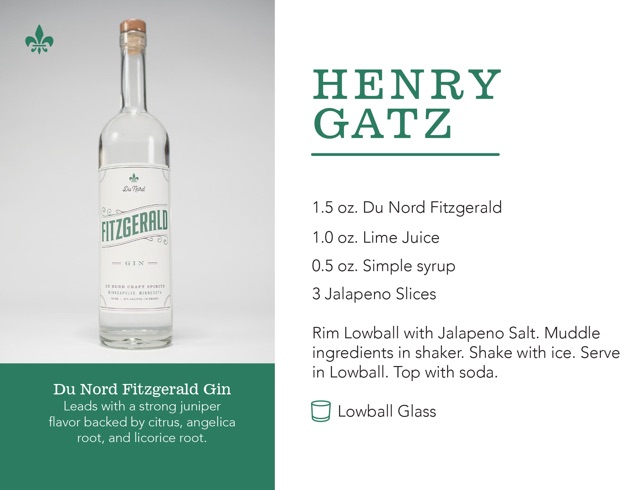 THE BOOZY SIDE OF THINGS

If all this talk about the work Du Nord has been putting into the community is making you thirsty, we’ve got you covered. Du Nord’s cocktail room remains closed for the time being, but it is easy to find their products locally and through Reserve Bar online. “We make five products,” says Montana. “We only make what we like… We like our gin. We like our vodka. We like our whiskey. We like coffee liqueurs and we like apple liqueurs.”

Since we are stuck mostly making our drinks at home, I managed to score one pro-tip for all of you gin and tonic lovers out there. Next time you buy an expensive tonic, do not pair it with your fanciest gin. “Don’t create a battle in the glass!” Montana exclaims. “One of those two things is going to win in that fight. If you’re going to buy really expensive gin, buy cheap tonic. If you’re going to buy really expensive tonic, buy cheap gin.”

Like many of you, I look forward to the day that Du Nord’s cocktail room reopens. Over the years Du Nord gained a reputation not only as a cool bar, but also as a safe space. Before she started working at Du Nord, Kustritz remembers walking into the cocktail room, “I could immediately tell: nobody here cares who I date,” she says. “It felt like a very welcoming place.”

Montana will tell you that he never aimed to draw a specific kind of crowd, but his inclusive hiring practices paid off. “Somewhere around half of our staff is from the queer community,” says Montana. “Our success is because of the people who work for Du Nord Craft Spirits.” 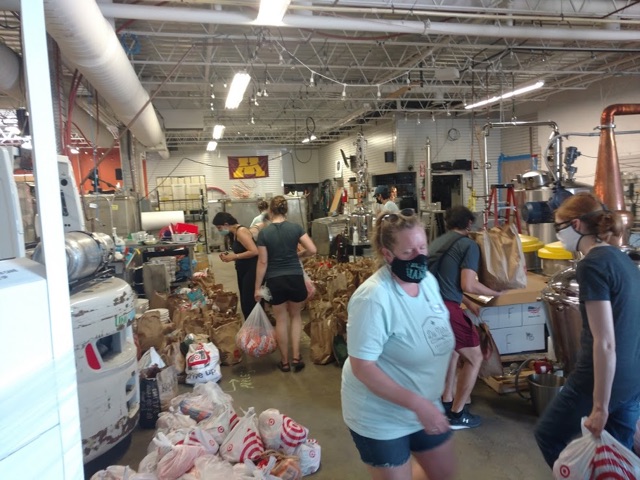 “As a company we got a lot of credit for what other people did,” Montana says, “We had 300 volunteers. People came in and gave all of their time. That’s who really did it.” Photo by Du Nord Craft Spirits.

The Du Nord team is proud of their line of spirits and will continue to create delicious beverages for all of us to enjoy. That said, they are excited about their non-profit venture. “I get the opportunity to do dope shit with all these awesome people,” Montana says. “Ultimately, no one needs booze. It’s really cool for us to do something that the community does need.”

If you, too, want to do dope shit with awesome people, partnering with Du Nord is a great place to start. Sign up to volunteer at Community Market, donate to the foundation, or just buy a few bottles of your favorite Du Nord Craft Spirits. Every drop helps.