From the Editor: French-Fried Finances 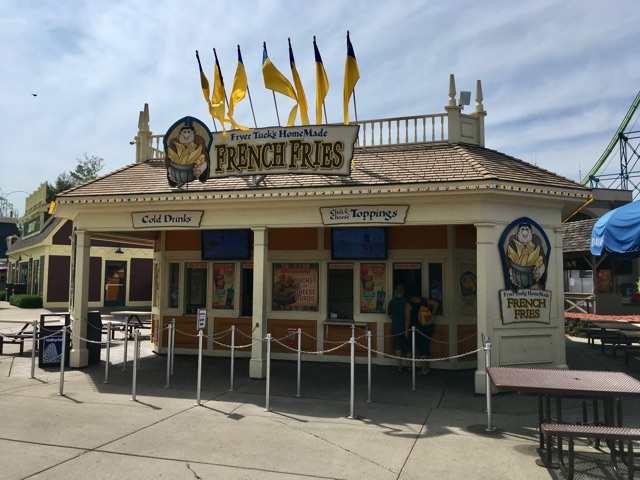 A fresh facade graces the face of the french fry place where I spent two summers, slinging spuds.

I was 14 years old when I had my first job interview. Eighth grade was wrapping up and I was looking for a way to secure a steady stream of stimulation for the summer. The interview was in the next town over; my dad gave me a ride.

My goal for the summer was to be hired by Valleyfair, the “family amusement park.” My age limited my options: food or games. I went the food route because I knew I didn’t have the charisma of games guy. Food was a lifestyle I could live up to.

I got the job. It came with two dark green, polo-style shirts and navy blue shorts with a matching belt. The laundry desk would have a washed, slightly oversized uniform ready for me each day. My bright red name tag notified other workers that I was under 16—and probably required as much supervision as I offered. Fryar Tucks had themselves a new cashier.

It was an immersive experience. I felt like I was part of something and I always left exhausted and smelly. I had this pseudo-summer-family unit that I genuinely didn’t want to let down. Valleyfair would spend the off-season recruiting summer workers from countries in Eastern Europe and South America, so there was often a language barrier in our tiny, sweaty food shack. Didn’t matter; we were fry family.

The summer was marked in milestones: the incrementally-released friend’s passes, late-night employee events in the park, and the end of summer bonus—which I received. The late nights and sticky hands added up to an unforgettable experience that I couldn’t wait to repeat the next summer.

In January of 2001, I received a letter from Valleyfair. It was sent to my mom’s house and it was in a different, larger envelope than those that contained my paychecks. I was hoping for a larger paycheck, but what I got was my very first W-2. My first lesson in filing taxes came shortly after, courtesy of my stepdad. And what came next was truly magical: seemingly free money, in the form of a refund, delivered to my home’s mailbox. I was mid-winter wealthy.

That $180 windfall planted a seed in me. Even though it seemed like I was alone during those late nights of scrubbing and mopping and washing—I wasn’t. Someone was keeping track of each hour; they were tracking every dollar earned. And they seemed grateful for my efforts.

I started feeling like every hour worked was an hour toward the greater good. Taxes were funds that were never going to find their way to my pocket, I learned that early on. With that expectation in place, I was sort of proud to see how much had accumulated. I had skin in the game; now I could complain about potholes and the national debt.

I’m positive I’d be depressed by how quickly my annual contribution is blown through. A year’s effort is maybe worth a city block of ice-melt. Or new turnout gear for a single firefighter. It counts though, and it adds up. All the blocks get plowed and the fire department has adequate gear. We did that. Collectively.

I may have looked like a lanky dingbat flailing about a pint-sized fry shack, but I was a piece of the puzzle. I was a cog in the machine.