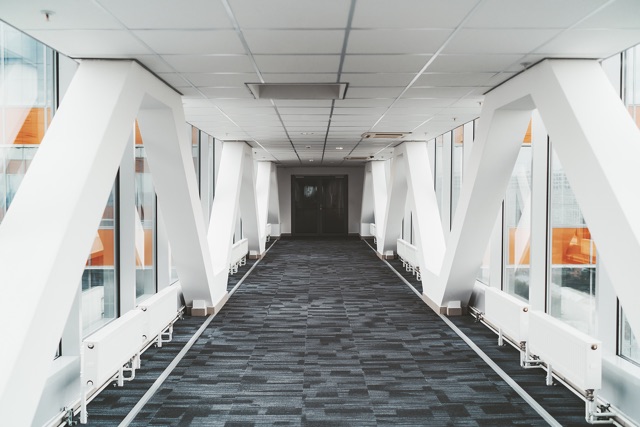 In 2008, I moved into the hip, forever up-and-coming Steven’s Square neighborhood of Downtown Minneapolis. Sitting adjacent to Loring Park and Downtown South—and central to pretty much everything. A good place to start.

I remember my quick cycle-route to work: third avenue to fifth street, down to first avenue. The company I worked for had space in the Butler Square building, which granted me a “gold-pass” to the Lifetime Fitness that was located in the basement of the Target Center—directly across the street from work.

That pass saw zero workout time, but it allowed me to roll out of bed each morning and hop on my bike, knowing I’d have a secure place for my whip and a post-ride shower before work. On occasion I’d sit in the hot tub for a few minutes before starting my morning routine.

The rest of my workday was spent off the ground. I worked on the seventh floor of the Butler Square building, and if I went anywhere, I took the skyways. I prided myself on my knowledge of the skyways and I used my lunch breaks to explore the ins and outs of the second story system. Restaurants, salons, department stores, kitsch markets, fancy eyewear—it was all in the skyway.

The city had a vibrant bustle; things were open. The office towers that cut our skyline were all but fully occupied and sports stadiums were starting to pop up like Chipotles.

But there’s been a noticeable shift—our city’s center has been dealt multiple blows, emptying out the towers. And, in some cases, the firms that occupied said towers have relocated their operations. Twelve years after my initial downtown immersion, the city’s entire vibe has changed. What is to become of the vertical space that densifies our downtown district?

The Minneapolis Downtown Council estimates office buildings sit at 15 to 16 percent occupancy, according to KTSP. Downtown occupancy is typically closer to 90 percent. Target was the latest corporate giant to announce a move. The now-empty City Center space, which used to house 3500 employees, is poised to create a vacuum for businesses that relied on their foot traffic.

Ted Farrell, President of Haskell’s Wine and Spirits called the city a “ghost town” and was worried for the future of Downtown. “I think it’s horrible it’s an ominous sign of things that are going to happen downtown,” Farrell predicted. Steve Cramer with the Minneapolis Downtown Council said it was early to tell what will fill the City Center space, according to March interview.

Negative absorption is like free agency for commercial real estate. Spaces in “lame duck” tenancy situations won’t have their leases renewed and all that space is absorbed back into the market. In the first quarter of 2021, the Twin Cities saw more than 1.5 million square feet of negative absorption. One million of those square feet of leased spaced left with Target.

Laura Moore, vice president of office brokerage services at Colliers points to safety concerns as the primary cause for firms leaving the city. “It’s addressing what Minneapolis is doing for the volatility that is happening in the community. I know it’s not going to be solved overnight, but the worst thing that could happen is not addressing it. I feel like it hasn’t been addressed. It’s been a topic that people are uncomfortable talking about because it’s calling it for what it is and it’s a problem,” Moore said in an interview with FOX 9.

Adding to the strangeness of the Downtown exodus is the amount of construction going on. New luxury condos have sprung up all over Downtown, with 2.4 million square feet of new real estate currently under construction in Minneapolis. How can a city facing occupancy issues also see a building boom? Steve Cramer says, “It’s not all doom and gloom but I think you have to be realistic about entering into this period of a reset for our downtown economy.”

In an email sent to employees, Target stated that employees who won’t return to their offices in City Center will still have a home-base-office, either in Brooklyn Park or Minneapolis. Target, like many corporations, will likely shift to a hybrid work environment where employers would still see employees at an office a couple of days per week, or a few days each month. Properly staggered, this sort of work model could support a rebirth of skyway and street-level businesses.

And the vacuum in space left by giants like Target could create opportunities for smaller businesses to take office space. Or the space could evolve into a workshare model. It could be the future.

We have a few more hurdles to climb before we can start to accurately predict the future of our Downtown. I watched Minneapolis rebound from the Murderapolis days—and it rebounded in a big way. I have complete faith in our ability to do it again.