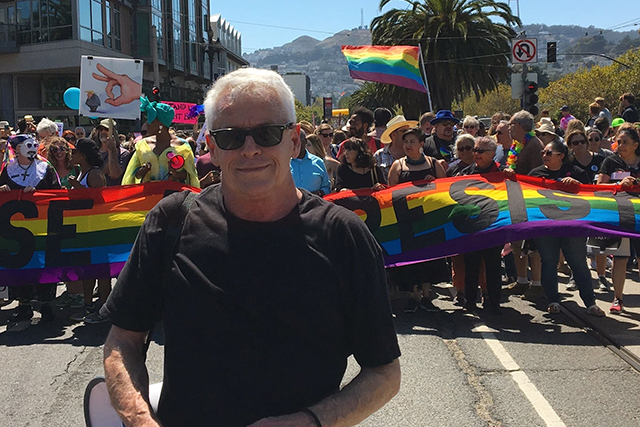 “We’ve certainly achieved a number of really important victories that I was not certain I would see in my lifetime,” says Cleve Jones. “Of course, most obvious among them would be marriage equality. That was something that was really kind of unimaginable for my generation.”

Jones (who self-identifies as a product of the anti-war, civil rights and early feminist movements) has been on the frontlines of change for decades. The pioneer LGBTQ and human rights activist joined the gay liberation movement in the early 1970s, was mentored by Harvey Milk, and would go on to co-found the San Francisco AIDS Foundation in 1983 and found the NAMES Project AIDS Memorial Quilt in 1987.

Yet, fondly reflecting on his decades of activism and how far we’ve come since, Jones is also quick to throw in a grain of salt.

“When Harvey was elected, he was one of, I think, six or seven out LGBT people elected to office—I can’t even count how many we have now,” he continues. “The transgender community has made quite a bit of progress, especially in the last few years. I’m pleased by all of that, but I’m a little concerned that so many people seem to take all of this for granted. And many of us fought hard so that they would maybe be able to take it for granted.”

Of particular concern is the loss of gayborhoods—cultural centers and touchstones for the LGBTQ community that are quickly fading away.

Pointing to the political power and influence that comes with large numbers in certain precincts and being able to win electoral victories, Jones also highlights the cultural impact that comes with living in the close proximity of a gayborhood.

“If we lose the gayborhoods, we lose political power, we lose cultural vitality, and we lose the ability to provide the specialized social services most necessary for the most vulnerable among us: our transgender siblings, long-term HIV survivors, seniors, queer and trans kids seeking safety,” he says. “And again, you don’t have to actually live in one of these gayborhoods to benefit from what we’ve learned. In the Castro, we learned early on how to build the systems to serve people with HIV.”

As a long-term HIV survivor who was first diagnosed in the late ’80s (though he says he was likely infected nearly a decade sooner), Jones is disheartened by the way HIV/AIDS is seemingly dismissed by a large portion of the population today.

“A lot of people are pretending that HIV/AIDS is over or under control,” he says. “And yet I’m seeing all sorts of young people coming to me every year after finding out that they’re now HIV positive. HIV/AIDS continues to affect a large number of people within our community, particularly in the more marginalized parts of our community.”

He continues: “In all we’ve learned in fighting HIV/AIDS, I’m surprised that our community has not taken on more of an active, visible role in addressing the challenge of COVID-19. After all we’ve learned, don’t you think we have something to bring to that fight? It’s difficult for me to see so many of the same mistakes playing out again. Obviously, the diseases are very different, but some of the mistakes we’ve made around it are so very much the same.”

In particular, Jones highlights the racial disparity in treatment and access to health care as the most damning similarity between the two diseases. “In parts of this country,” he says, “we have reduced HIV transmission to almost zero, and that’s primarily among white people who have good health insurance.

“We see that same thing with COVID: the terribly disproportionate impact on communities of color, particularly African-American, Latino, and Indigenous communities. This is déjà vu all over again. Higher infection rate, higher hospitalization rate, higher death rate…” he trails off before noting the similarities between HIV deniers and the COVID-19 conspiracy theorists. “In my mind, I’m hearing the echo of all of those people who screamed that HIV didn’t exist and that the medications were poison.”

He calls out how events in the last five years indicate that all the progress made could be undone in the blink of an eye. Specifically, he noticed a decline in activism after marriage equality: “I would like to see conversation that’s about intersectionality, go beyond individuals, personal identity and be applied to actual issues. And I’m not seeing much of that.”

He adds, “The community has largely embraced, at least with our slogans, the concept of Black Lives Matter. I’m sorry, but fighting racism takes a lot more than putting up a poster in your window or showing up at a rally. I feel that a lot of times folks think, ‘Let’s just add a stripe or two to the flag,’ and that makes it all better. And it does not. If we really want to play a useful role in dismantling systemic racism in this society, I think we need to do a better job.”

“I absolutely believe that every one of us has a contribution we can make to the movement,” he says. “But when I talk about the movement, I’m not just talking about LGBT, I’m talking about the global movement to peace and justice. And we are a part of that, but I think in recent years, in some sections of the community, we’ve kind of lost sight of that.”

Cleve Jones is calling on everyone to “find their place among the ranks of all the ordinary people out there who thought about a better world.” Regardless if a person is young or old, regardless of race or gender, Jones says everyone has a talent to bring to the movement.

But it comes with a caveat.

Looking back on his life, the 67-year-old notes how he might be getting older, but that’s not stopping him. “Despite it all, I’m lucky. I still have a lot of very good friends that are alive. I have a partner. I have a step-dog. I’m grateful to be alive. And I would just like to continue to be somewhat useful. I don’t have any desire to just retire and go away.”

He concludes, “If anybody were to look at my life and take away one thing, I would hope it would be that I did make at least a little bit of a difference and that I had a good time doing it.”