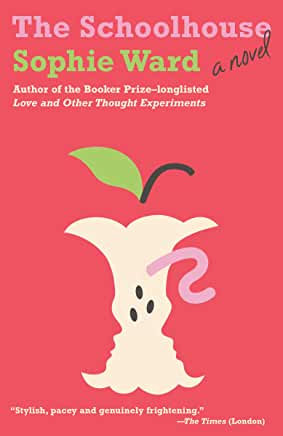 University librarian Isobel has created a safe, contained existence of work and home, to date a safe place and protection from…what? We find out as the narrative shifts from today (1990) back to 1975 when terrible things happened in 1975, as are revealed in Isobel’s childhood diary during her time at The Schoolhouse. But past events can never be completely locked away. One day, a note from an old teacher is forwarded to Isobel by her estranged mother, and Isobel’s whereabouts is made known, and searchers from the past close in. The Schoolhouse was a 1970s experimental school, purporting to offer freedom and adventure, but darker happenings as well. The past is coming now for Isobel, bringing unwanted knowledge and danger for those around her.

Nar, a young(-ish, she’s 28) Armenian woman, is less than thrilled when her boyfriend of several years goes down on one knee, holding out a glittering rock, to propose publically in front of his partying San Francisco tech-mates. Too much, too loud, too un- Armenian. She says “No,” and while he’s off for weeks on business overseas, allows her mother to create a spreadsheet of eligible (Armenian) candidates to fill the space. It happens to be “Explore Armenia” month, and Nar does attend events, but finds herself attracted instead to the beautiful and somewhat mysterious Erebuni, Armenian activist, but definitely not male. Lots to learn for Nar, her enthusiastically Armenian Mom and for the reader, in this moving, amusing, informative journey of self-discovery and family solidarity.

Logan Ramsay is heir to an unspeakable legacy; his brilliant mother, whom he’d assisted as a teen, had, while trying to save rice crops through bioengineering, instead unleashed world-wide famine, “The Great Starvation, causing two hundred million deaths. Now working for the Gene Protection Agency, Logan is exposed to a virus during a raid on a “dark gene” lab. Recovered, he is different–stronger, vastly more intelligent. Only one person could have engineered this–but she was dead. Is he now infected with his mother’s promised “Viral gene drive,” promising her “significant upgrade”? Will he attempt to spread the upgrade, certain to annihilate a significant number of fellow citizens, or strive to destroy the virus? Is upgraded intelligence even the trait needed to save humanity?

As Van den Broeck examines the doomed architects of and their failed constructions, she reveals her own ingrained melancholy and dark, poetic soul, to the point that her own boyfriend calls her compulsive for secretively inserting research into a proposed Scottish vacation. Her chosen sites range from America through Europe and from the 17th century to the present, from Rome’s Francesco Borromini who threw himself on his saber, to Colorado Springs’ kinetic sculptor who shot himself to death in 1995. Her own inner darkness surfaces s she explains, “…buildings have at least a shot at eternity. I don’t have any illusions about my poems.” Some architects of failed structures are only rumored to have self-destructed, with the almost implication they’d have made the better choice.