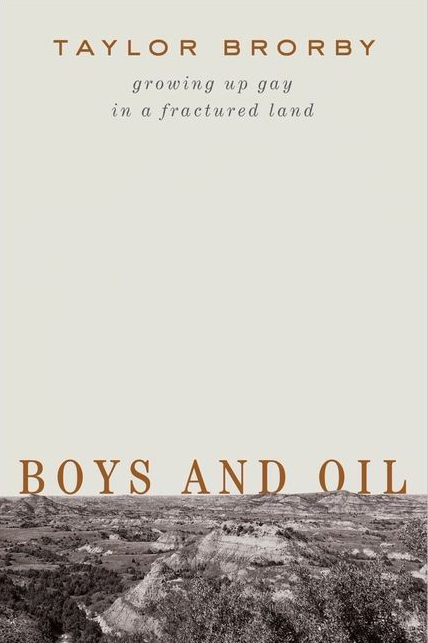 Boys and Oil: Growing Up Gay in a Fractured Land
Taylor Brorby
Liveright
$27.95

Being gay in rural North Dakota, asserts author Brorby, “seems akin to a ticking bomb.” While a reader’s first response might be, “Then leave,” one is drawn in to Brorby’s deep love for his birthplace and his horror at what is being wreaked upon it through man’s greed and the destruction of the land, first through destructive coal mining and now fracking for oil wealth. “Toxic masculinity” is not a throw-away phrase here, but a way of life–a way of life that puts other’s lives in danger. Once outed to his parents, they cut off all communication, and that remains so today, despite their son’s successes as essayist, poet, and work as Environmental Justice at the Tanner Humanities Center at the University of Utah. A harrowing and heroic read.

This updated volume contains all Isherwood’s lectures given in California universities in the 1960s, including the lost conclusion to the second, presented here for the first time. Stressing, he speaks of his personal writing, Isherwood for the most part foregoes references to lofty icons as influences, and speaks of the importance of one’s journals, and of the importance of mining them own of his own two forms of writing, the “real, constructed contrived novel”–plot, action, conclusion–and a more “literary” work which is a “portrait in depth.” This is a mere fragment of the first lecture, which, as do the rest, draws the listener/reader into the writer’s orbit in in a most compelling way: you’re being shared with, not lectured at. Congenial and heartfelt.

Vuong, author of On Earth We’re Briefly Gorgeous, a memoir encompassing his mother’s fractured existence, joys and sorrows, now enters the realm of grief following her death. Fragmentation inevitably afflicts those breaching oceans and continents to find new lives, laboring ceaselessly to knit up their tattered seams. Yet great grief does not preclude humor and playfulness. Words dance to Vuong’s command, startling those expecting other sounds, other meanings as in “Snow Theory:” “This is the best day ever / I haven’t killed a thing since 2006” leading to “In the snow, the dry outlines of my mother / Promise me you won’t vanish again, I said / She lay there a while thinking it over” and at the end bursts yet another surprise and explanation.

The playful, happy young woman in the snapshot before him was young, happy, coquettish. His mother–a mother Édouard Louis had never known. “I think I’d forgotten that she had been free before my birth–even joyful? … the humiliation she endured from [my father]…the twenty years of her life deformed and almost destroyed by misery and masculine violence.” Louis’s confession he himself had been a participating agent, fearing through his child’s mind she would discern his secret gayness. Louis was her third child, and then, as though soldering her shackles, she bore twins. “Things could have been otherwise,” Louis muses. And then, a phone call: “At last. I’ve done it!” and things were. This short book travels a long road; for mother and son.