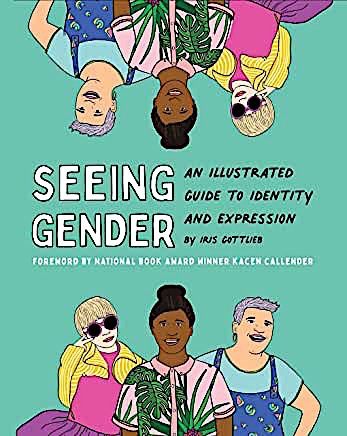 Gender is intensely personal, and widely misunderstood. Gotttlieb has created this compendium to answer and explain concerns from both within the LGBTQIA+ communities–and without. “Anatomy doesn’t determine gender!” is a basic lesson, and the following succinct, illustrated topics offer a broad and reassuring overview of the many people that make up this human condition. Privilege, gendered clothing, medical bias, and many other issues are include. An excellent and accessible reference source.

An eye-catching romp of a book for young and old(er). Mr. Nelson lives with Mr. Watson, who keeps chickens; three at first, but, as chickens will, they proliferate–to the point Mr. Nelson announces he must leave, unless there’s a reduction in the exploding 456. Movement, rhyme, rhythm, nonsense squawks, and the realization friendship prevails. It’s lonesome that night, but comes a chipping, a cheeping, a nonsense squawk from under Mr. Watson’s pillow: 1,2, 3, and it begins again!

Housework runs gloriously amok as this household decides who will do what, and who, indeed, must bathe the cat. In rhymed orders, the directions are mixed and mashed “Dad, you mow the floor!/Bobby, rock the dishes!/Sarah, bathe the rug!/I’ll mop the fishes!” The ridiculous ring-changes offer beginning readers a handle on the words, and the kaleidoscopic movements show this mixed household in high gear. Cat, smirking, remains high and dry. A charmer!

Dark, apocalyptic, absorbing, Ennes isolates us with their characters in a winter-riven isolated castle. A new Institute doctor has arrived…no, not new, the old in fresh flesh, to inspect its own corpse, infected by a thready black, retro-orbital parasite. The Medical Institute maintains a hive of renewable, enmeshed practitioners– parasites themselves. Will this new entity replace them? Why is the new leech cut off from its kind? Will two escape? When Gift whispers, “Gothic!” slip them Leech.

The Touch of Her Voice
Sara Scott
WordCraft
$8.99

Jensy Wilett is respected, honored for her college basketball prowess, yet a youthful secret ruins promising romances. Smitten by a coup de foudre for law student Sophie Barnes, Jensy gives herself to Sophie, vows to herself to bury the past. But can she? The interesting premise Scott offers is that even after years, the past can reach out with consequences. What is friendship? What is the tensile-strength of love? The enduring power of forgiveness? Book II of this trilogy, The Sound of Her Smile, is in final edit.

All That Moves Us: A Pediatric Neurosurgeon, His Young Patients, and Their Stories of Grace and Resilience
Jay Wellons
Random House
$28

Wellons shares (with patient’s permission) the harrowing and hopeful aspects of his delicate invasions of children’s damaged brains. He has learned, over his twenty-five years as a surgeon, that heart is as vital as the cerebral regions, and that while not all the stories have happy endings, the patient and family have been treated throughout the breadth of the treatment as valued–and loved–human beings. A moving and enlightening read.

A child’s death echoes down the generations, enmeshing Meredith Strand, who, separated from her wife moves back to Cape Disappointment with daughter, Alice, to live with her own mother, Judith, succumbing to Alzheimer’s. Told in flashbacks to the original 1881 tragedy, we follow Meredith’s efforts to find the truth behind the curse of the place. A “haunted” lighthouse once drew tourists; does it hold the key? There’s “something in the water,” insists Judith. Her encroaching illness, or…?