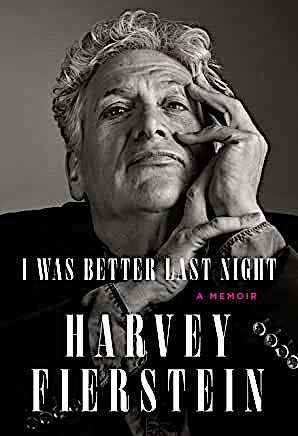 I Was Better Last Night: A Memoir
Harvey Fierstein
Knopf
$30

Harvey Fierstein possessed flair at birth. He lets it shine here, promising to tell all, from his second-grader jealousy in Brooklyn’s PS 186, cast as the paltry caped King instead of Sleeping Beauty’s glamorous, green-skinned, black-nailed Evil Witch, to a violent sexual coupling at the Trucks he turned instantly afterward, pen to notepad, words that bore fruit in International Stud, to why rabbits proliferated in Widows and Children First! Fierstein adapted La Cage aux Folles, won two Tonys (of four total) for portrayals in Torch Song Trilogy and Hairspray, and…much, much more. What I Did During Covid-19 could have subtitled this many-faceted jewel that he sums in closing, “And there’s no such thing as having lived too much.” (And, the fat lady ain’t sung yet.)

A scholarly, wide-ranging overview of the magazine that influenced thousands of readers over decades of time, a monthly humor publication that only carried spoof ads and let its then-young readers in on what adults were really thinking, Seeing MAD is a treasury of viewpoints on the machinery that ran the lot. A reader in, say, 1957, might not have been able to parse Nathan Abrams’s “A Secular Talmud: The Jewish Sensibility of Mad Magazine,” or Nicolas Labarre’s “Joining the Fray? Madon Richard Nixon and Spiro Agnew,” but they knew they were on to something big. That year saw MAD’s only paid ad, “REAL ADVERTISEMENT” until 2001, when economic necessity intervened. A rich compendium of history, personalities, and the “What, Me Worry?” of an era.

Squirrel Hill: The Tree of Life Synagogue Shooting and the Soul of a Neighborhood
Mark Oppenheimer
Alfred A. Knopf
$28.95

In the deadliest anti-semitic attack in American history, on 27 October, 2018, a lone gunman murdered eleven morning worshippers at the Tree of Life Synagogue. A Pittsburgh neighborhood, Squirrel Hill is one of the country’s oldest Jewish communities, tight-knit, with members spanning several generations. Author Oppenheimer is not himself a resident, but his father grew up there, and family ties to Pittsburgh predate the Civil War. Declining to focus on the killer, or even on the immediate sensational crime, Oppenheimer spent the year following the massacre interviewing residents; Jews and Gentiles, old and young, religious and not, to learn how one town had reacted; how their collective grief, their determination to continue in their place and a cherished environment played out over time. Sobering. Hopeful.

Liminality knits the complex threads of Morgan’s frayed, bruised, but ever-persevering protagonists. Southern, variously queer, the characters pursue erratic, often dangerous paths carving out their perceived bodies, lives, and unique ways of walking in the world. Those paths include immersing in the past, meeting with a real personage in “Taylor Johnson’s Lightning Man” when 14-year-old Taylor waits in1908 on Ellis Island to meet Frank Woodhull, aka Mary Johnson, to take their picture together in an electric photo booth. The trans person in “Manywhere” is trapped in a cabin with her wandering-in-place father until they can swap with another “daughter” and escape. Brilliantly crafted, the reader is led into each of the nine tales, sometimes uncomprehending, frequently unsettled, but perceiving—as through a dark glass—coherency.