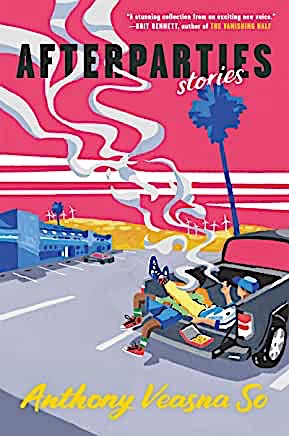 So died last December before the publication of his first book, a stunning set of short stories of Cambodians who fled their ravaged country, their children, and the tangled legacy they received in their new and better lives in California’s Central Valley. Better? Not always, not often, but perhaps…tomorrow? So could speak for male or female, older or younger, straight or queer: mother and daughters in “Three Women of Chuck’s Donuts” a young badminton star idolized by younger boys working against time to keep his crown in “Superking Son Scores Again.” “Somaly Serey Serey Somaly,” concerns a young woman bearing the burden of being believed the reincarnation of a dead relative. Throughout, So makes the queer life in his vibrant mix vividly proud and alive.

You don’t have to come from a foreign country to be a stranger in your land. Cayley’s haunting short stories weave together stealthily, gentle until the cosh strikes your skull. In “The Other Kingdom,” Naomi (then Nancy) and Carol are returning, broke, from a road trip to San Francisco to see Jim Jones. Nearly back home, they stop in at a commune in the Maine woods. Nancy/Naomi stays, Carol drives back home to Toronto. Naomi is soon pregnant with Trout, who grows up in the commune, flees in her teens, becoming an immigrant in the outside world. She and others meet, make other choices;  ripples spread. The narrative threads tighten, binding Trout, Naomi, and The Other Kingdom together in a final, choice. Brutally, beautifully lyrical.

Capote’s Women: A True Story of Love, Betrayal, and a Swan Song for an Era
Laurence Leamer
Putnam
$28

Truman Capote (1924-1984), fey, flamboyant, openly gay, was small of stature, mighty of ego, hugely–if erratically– talented. Audrey Hepburn starred in the film of his novella, Breakfast at Tiffany’s; In Cold Bloodtransfixed millions. Craving attention, Capote collected his “swans,” a coterie of the world’s most beautiful, uber-wealthy women.  His promised chef-d’oeuvre, Answered Prayers, would feature these “swans,” including Babe Paley, Pamela Hayward, Lee Radziwill. Each had confided in Capote; deep, personal confessions, unaware he immediately tattled to the others. The great roman à clef dwindled to an excerpt, “La Cote Basque ’65,” in the November 1975 Esquire. Betrayal and outrage. Finis swans. Leamer’s book is an immersive plunge into the fabulous, though limited, and often sad world of the swans, and the long spiral down of a once fêted author.

America Is Not the Heart
Elaine Castillo
Penguin
$18