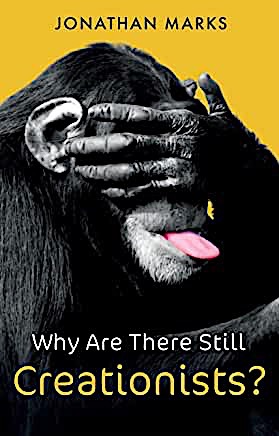 Why Are There Still Creationists?
Jonathan Marks
Polity
$22.95

Despite overwhelming evidence that humans are descended from among the apes, though branching long, long ago, many want no part of that story. Anthropologist Marks aims knowledge and wit at creationists and evolutionists, pointing out that both science and religion are dogmatic, suggesting paths to make scholars of religion and science more allies than foes. Anthropologists’ findings show that the ancestors—everyone’s—are sacred. However a group envisions their ancestors—an unclothed couple, a snake, an apple—they create a lineage within which everyone belongs. Your story, your ancestors, the sacred ones from whence you sprang. Marks argues persuasively that creationism is a theological and not a scientific debate, that its thinking about values and meanings might better be a crucial part of scientific explorations.

One of the Ojibwe words that describe the terrain around Duluth, now Point of Rocks, is Onigamiising, the place of small portage; another is Misaabekong, the place of the giants. The lives and stories in Grover’s book start with her ancestors’ arrival at the American Fur Post in western Duluth more than 200 years ago, and unfold in stories like a vine through different times and realities, some from Grover’s family, all living threads in a tapestry connecting the land and the Ojibwe people—and the animals, like the snowshoe hares that in the winter nights keep watch over the sleeping world and dreams. A professor of American Indian studies at UMN Duluth, Grover is a member of the Bois Forte Band of Ojibwe.

Living on the Edge: When Hard Times Become a Way of Life
Celine-Marie Pascale
Polity
$24.95

Jesus cautions, in Matthew 26:11, “The poor you will always have with you.” It seems there’s a reason for that. We need them as cogs in the machinery keeping the lives of the affluent running smoothly while they amass more money, more goods, more power. That was so in BCE, it is thus in the CE. Sociologist Pascale interviewed workers in Appalachia, Standing Rock and Wind River Reservations, and Oakland, CA. Her respondents all worked—often multiple, low-paying, jobs, yet remain enmeshed in poverty. The core problem, Pascale illustrates in chapters covering health care, prejudice in class and race, payday loans of APR 400-660%, is the collusion between government and corporations that puts profits above people and the environment. How to change? Read and consider.

Many today recall Elvis Presley not in his prime, but the bloated self-parody of later days. Hoedal examines genetic and class aspect of Elvis’s life; his inherited health problems and grinding poverty which drove his determination to provide not only for his parents, but for a widening circle of kith and kin. Hoedel documents inherited health problems on paternal and maternal branches leading to similar early deaths, including his mother at 46 and himself at 42. Nine out of 11 bodily systems were affected, Hoedel found, and medications he took were not as an addict but were attempts to ease severe chronic pain and lifelong insomnia. Hoedel’s book is a much-needed corrective to the many myths and errors surrounding the King’s life and death.