A Word In Edgewise: Should We Have Stopped at Erectus? 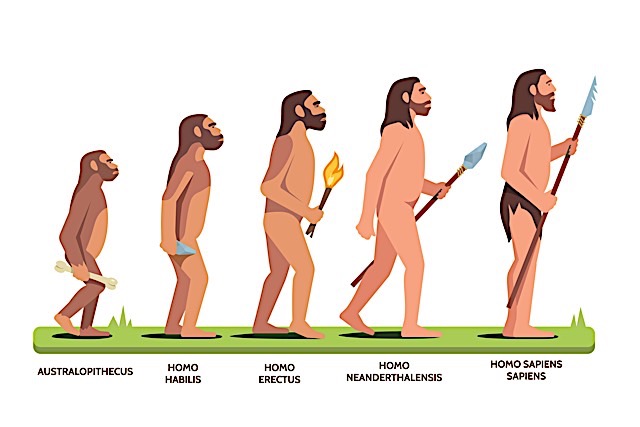 We are very slightly changed From the Semi-apes who ranged
India’s Prehistoric clay; He that drew the longest bow
Ran his brother down, you know As we run men down to-day.

E.O. Wilson’s The Social Conquest of Earth (2012) is a fascinating, enlightening, sobering read. Wilson explores the sources of human socialization, creativeness, culture, altruism, eusociality; much more than can be included here, but Homo sapiens’ irresistible attraction to war over the millennia is of particular interest at this moment in time.

Wilson harks back to Australopithecus afarensis, some five to three million years ago, then to the six-million year interim when the chimpanzee-pre-human line split off and today’s “we” began to develop on our dogged rise to dominance.. Homo habilis emerged, and made the crucial dietary leap to now to regularly consume meat as well as vegetables, who had a larger brain, with physical changes in its folds that later organized language. They were smarter than neighboring hominins and paved the way for Homo erectus who possessed a yet larger brain (though not as large as ours. Erectus crafted stone tools and could maintain controlled fire at their campsites. Erectus travelled, dispersing from Africa, some as far as northern China, others south to tropical Java–missing only Australia, the New World and some bits in the Pacific. They multiplied; and evolved.

Wilson foreshadows darkly, “Homo sapiens had arrived and its social conquest of the Earth was imminent … The origin of modern humanity was a stroke of luck–good for our species for a while, bad for the rest of life forever.”

A problem, of course, was that we, the Homo saps, were then all (mostly) had those big brains, plus the necessary dentition to eat the cooked meat we needed for the amounts of protein needed for energy to slay those “others” in their way and the group cooperation to act. Not to be ignored is what Wilson termed “social intelligence,” essentially the ability to “read” those in one’s group to form alliances, manipulate one’s fellows, raise–and maintain–one’s hierarchical position in the clan. (The birth of politics)

In the chapter “War as Humanity’s Hereditary Curse,” Wilson gives several historic examples then cautions, “It should not be thought that war, often accompanied by genocide, is a cultural artifact of the growing pains of our species’ maturation. Wars and genocide have been universal and eternal, respecting no particular time or culture.”

Populations grow, and Homo sapiens do not curb our instincts to claim new territory and to consume without consideration. Humans today still hunger to belong to a group, and to defend that group from “outsiders,” going so far as to dehumanize any “other” as a valid reason to eradicate them.

Wilson quotes William James’s 1906 antiwar essay: “History is a bath of blood” …“Showing war’s irrationality and the horror is of no effect … The horrors make the fascination. War is the strong life; it is life in extremis; war taxes are the only ones men never hesitate to pay, as the budgets of all nations show us.”

Kipling (whose only son, John, yet unborn, would die at 18 in the Great War), concluded his poem:

Ere they hewed the Sphinx’s visage Favouritism governed kissage
Even as it does in this age.
Thus the artless songs I sing Do not deal with anything
New or never said before. As it was in the beginning Is to-day official sinning,
And shall be for evermore.