A Word In Edgewise: Safe Haven No More? 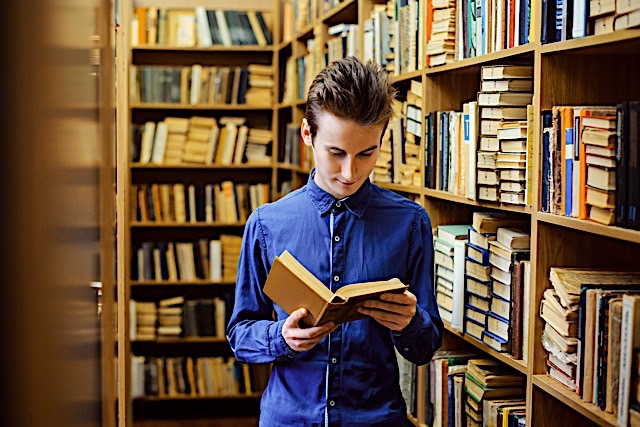 When I was a kid, my folks had a study lined with books. It had some easy chairs, a world globe, and my parents had cocktails there before dinner. I can’t say I was “allowed” access to the little library, it was never an issue, I simply selected books that looked interesting, and read what I chose.

One day, when I was about ten, I’d taken down and was absorbed in a large volume when Dad peeked over my shoulder then said, “I’d rather you didn’t read that until you’re older.” It was Suetonius’s The Twelve Caesars, (121 CE) and I had just discovered that Caligula enjoyed a rather more flamboyant social life than did folks in West Hartford, Connecticut. No fuss, no recriminations, just Dad’s suggestion, and I put it back on the shelf.

As I was researching the current wave of book banning in school libraries for this issue, an onscreen news flash announced Salman Rushdie, author of The Satanic Verses, had been attacked–stabbed, and collapsed onstage–as he prepared to address the Chautauqua Association in New York. Ironically, he was meeting with Henry Reese, co- founder with wife Diane Samuels of Pittsburgh City of Asylum, created in 2004 with the goal of providing sanctuary for writers exiled from their own countries.

As Reese later told George Packer of The Atlantic, “Rushdie wanted to talk about writers in America from other countries and cultures who were ‘actually redefining what it meant to write American literature, the larger theme was to be the origin and purpose of cities of asylum—what freedom of expression means, beyond just ‘abstract language.’”

This shocking event (Rushdie did not die, but is severely injured) underscored how fragile, how precious is our own right to freedom of expression here at home. Another news brief noted that librarian Amanda Jones recently filed a defamation lawsuit against two men who falsely accused her on Facebook pages of being a “pedophile and?“advocating teaching anal sex to 11-year-olds”. Speaking in an interview with NBC News, Jones said “I’ve had enough for everybody. Nobody stands up to these people. They just say what they want and there are no repercussions and they ruin people’s reputations and there’s no consequences.”

Jones is the president of the Louisiana Association of School Librarians, and the attacks followed her speaking out against book censorship at a local library board meeting. There, after one of the men Jones is suing (he runs the conservative, activist Citizens for a New Louisiana) advocated restrictions on [any] books with sexual content, Jones demurred. She replied, “The citizens of our parish consist of taxpayers who are white, Black, brown, gay, straight, Christian, non-Christian—people from all backgrounds and walks of life, and no one portion of the community should dictate what the rest of the citizens have access to. Just because you don’t want to read it or see it, it doesn’t give you the right to deny others or demand its relocation.”

While the City of Asylum seeks to provide safety for those from beyond our borders, we must be as vigilant to defend the rights of expression of those citizens within.