A Word In Edgewise: Freely-Given, or Gelt-Gaining? 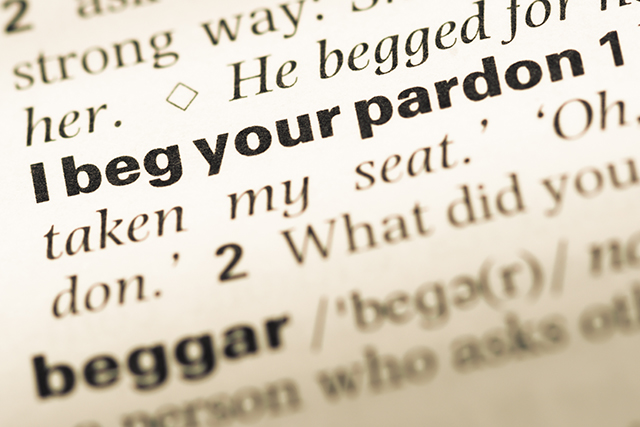 Close up of old English dictionary page with word i beg your pardon.

“Pardon me!” “I beg your pardon!” were phrases drilled into to me from childhood. Simple politeness. One asked another’s pardon after some breach of kindness or etiquette, for interrupting a parent, or stepping on a toe. It became a reflex, like covering one’s mouth before coughing.

As we grew older, we were taught about judicial pardons, pardons granted for sentences that were deemed too long, or meted out unjustly. Graft and corruption were not unkown concepts, but they were not on the general radar, not everyday events that one expected.

An unwarranted, bought release, still comes as something of a shock, even though when one searches, commercial “justice” goes far back into history. In many societies, over centuries, a timely application of money across the proper higher-up’s palm will set aside–even negate–an existing crime or buy religious futures. At this point, I posit, a line is crossed, and pardon becomes license. A purchase of freedom, not only from a specific unjust situation, but also the knowledge that the wielder of power will turn aside (to count the cash?) while the buyer walks free to act again in his or her own interest.

Who has the right, if such even exists, or the power, to put a price on human worth? Until the Catholic Church outlawed them in 1567, those with the ready could buy indulgences, ecclesiastical Get out of Jail passes that absolved the purchaser or his intended’s past sins in this world, and/or a pass on Purgatory after the buyer’s demise. You can’t keep a good scam down, though, and a few centuries later, in the year 2,000, Pope John Paul II authorized bishops to bring back indulgencies, purportedly to celebrate the Church’s third millennium. Not crass cash handed over directly, but via softer, kinder fiduciary donations to designated charities and other acceptable acts,.

The earliest plenary indulgence recorded was issued by Pope Urban II in 1095, remitting all penance incurred by crusaders who had confessed their sins. Urban considered their participation equal to a complete penance. In 1517, German friar Johann Tetzel started selling indulgences to renovate St. Peter’s Basilica in Rome. Money-generating schemes tend to escalate like President Harding’s 1921 Teapot Dome scandal, and indulgences were no exception.

Pope Leo X (1513-1521) was born Giovanni de’ Medici (those Medicis), and approached his papal duties heartily, observing, “God has given us the Papacy, let us enjoy it.” And did, with a vengeance, siphoning off Papal liquidity to a trickle and thence onto a 400,000-ducat deficit. He then high-financed selling indulgences, but despite his good works helping rebuild St. Peter’s, encouraging Raphael and other artists, promoting study of literature and antiquities, he ruffled the feathers of Martin Luther, who nailed up his 95 Theses against indulgences and set off the Protestant Reformation.

Thorny, complex histories, these, but even a light skim suggests that pardons are best dispensed judiciously, freely, for specific trespasses, not blanket future coverage like Allstate. Slipping over cash may well have unwanted repercussions for He-who-stuffs- his-pockets. Spontaneous, string-free is the ticket. There are always Luthers lurking.