A Word In Edgewise: Butterfly Wings Beating Ever Louder 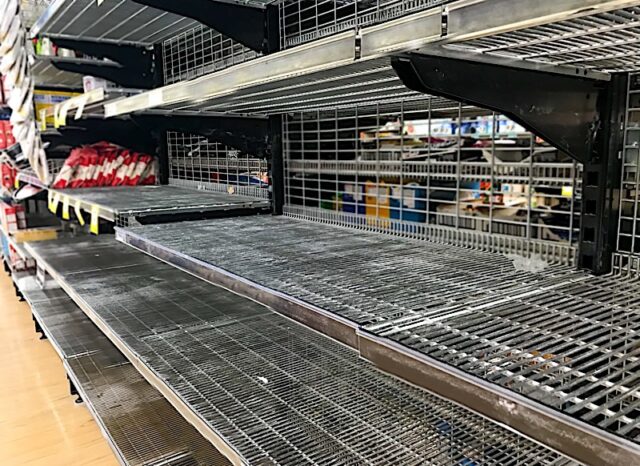 How did you prepare for Y2K? Did you know someone who could take “What if’s?” exponentially higher than a moon shot? Have you ever even seen a 50-lb sack of oatmeal? Did the deliveryman (no Amazon Prime, yet) trundle cases of ammo to your door on a weekly basis?

“What’ll happen when everything goes down?” was a consuming topic, and the apex of angst was always, “Can you imagine if the big rigs don’t roll?” At that time I lived in a Deliverance area code, and thought I had a pretty good idea.

Well…the clock struck the midnight hour and Anno Domini 2000 rolled in with scarcely a murmur; the usual fireworks televised round the globe, the popping of champagne corks as the standard ball dropped in jam-packed Times Square. No one asked what beverage paired with oatmeal.

Fast-forward two decades, and here we are again, though in a less speculative, more pragmatic, hands-on situation. There’s a fer-sure plague around the globe, and we on this side of the pond currently have front row seats to Britain’s suite of woes. Sure enough, as my Y2K Be-prepared pal prognosticated, it ain’t a pretty picture.

As the Twentieth Century wound to a close, fear grew that clocks and computers advancing from 1999 into 2000 weren’t prepared to differentiate the ’00 in 2000 from 1900. Afterwards, in relief, many claimed Y2K merely an embarrassing ripple, but in fact, one reads now, for at least a full decade, some six billion dollars had been spent to assure that smooth transition.

Is anyone here or in Britain prepared for the problems now popping up like methane bubbles from a swamp? Supply, demand, sufficient work forces? Like Americans hearing snow or hurricane warnings for Alabama or the Gulf, British grocery shelves are being swept clean and disgruntled drivers queue at the pumps, numerous and angry enough that the army was called to stand-by. There’s a shortage of truck drivers? Yes, the ones now living back in the EU countries.

Retailers threaten that without enough truckers at the wheel within 10 days (of this writing), it’ll be a lean Christmas for the well-to-do as well as for the Tiny Tims of the sceptr’d isle. Poultry delivery has been disrupted, and that means the Christmas goose, turkey, and any other gallinaceous comestibles.

I mention these trials not out of schadenfreude, but to remind how slender, how fragile is the invisible network that feeds and clothes our global village. The UK recently spent millions bailing out Illinois-based CF Industries, allowing it to restart one of its two UK plants (which it had shut down after the soaring natural gas prices—the US plants produce some 60% of Britain’s food-grade CO2).

Are we getting closer to Ray Bradbury’s 1952 “A Sound of Thunder”? His time-traveling big-game hunter, intent upon a T-Rex trophy, inadvertently crushes a butterfly underfoot, then returns home triumphant—to a completely changed world. Today, soaring natural gas prices in Britain prompt an American fertilizer company to withdraw, jeopardizing the fizz in Brits’ Christmas pints.

Time’s shorter, now; we’ll not have to cross 66 million years to learn our story’s end.