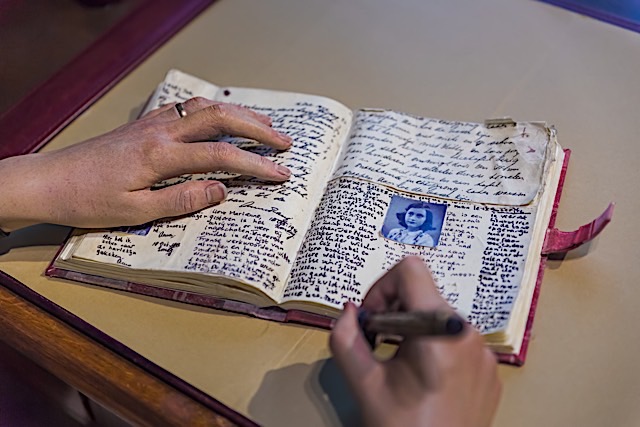 When I read recently that Anne Frank’s Diary: The Graphic Adaptation (2019) had been pulled from some Texas school libraries, I did just I would have done as a student: tracked down a copy and read it for myself.

I had read a text edition of The Diary of Anne Frank years ago, the translation of the 1947 Dutch edition published by her father, Otto Frank, just over two years after his discovery that Anne and her sister Margot had perished, most likely in February, 1945, from typhus in Bergen-Belsen.

Fleeing from Germany to Amsterdam, the Jewish Frank family, Otto, wife Edith, daughters Margot and Anne, together with four others, spent two years hiding upstairs in the “secret annex” above Otto’s former business, maintaining absolute silence during working hours. Betrayed, they were arrested and interned in various Nazi concentration camps.

After the Nazi arrests and theft of their valuables, Miep Gies, a friend/protector, entered their refuge and collected Anne’s red- and white-checkered diary and other loose manuscript papers. Upon repatriation after Auschwitz, Gies presented the papers– unread–to Otto, declaring, “This is the legacy of your daughter, Anne.”

At first unwilling to read them, Otto changed his mind, and was amazed, stating, “The Anne that appeared before me was very different from the daughter I had lost. I had no idea of the depths of her thoughts and feelings.” He made the remainder of his life’s work the Diary’s publication and dissemination, now available in over 70 languages.

Anne had received her plaid diary on June 12, 1943, her thirteenth birthday. She named it “Kitty,” and immediately began to confide her thoughts to its pages. Surely, 21st century teens also wonder about their changing bodies, have same-sex/opposite-sex crush daydreams? Are they also not sometimes afraid, confused? Do they not sometimes harbor unkind thoughts about their parents? Anne wrote, processed reviewed, rethought, matured.

The Diary is suitable for at least fourteen-year-olds and up, while a variety of abridgements exist for younger readers. The beauty and value of the Graphic Adaptation lie in the fact that many teens and adults today respond to graphic presentations. The created dialogues are faithful to Anne’s spirit, the art and coloring sublime, while sections of quoted texts are drawn from the 1986 Definitive Edition, published under the aegis of the AFF (Anne Frank Fonds), holder of the copyrights of the family archives. (Such a hue and cry was raised over one Texas ban that the Graphic Adaptation was returned to the library shelves.)

Inevitably, deniers have claimed Anne’s Diary a forgery. Until his death in 1980, Otto Frank brought legal actions against them. The Anne Frank House and the Anne Frank Fonds continue this work today. In the 1980s the Netherlands Forensic Institute, at the request of the National Institute for War Documentation, produced more than 250 pages of handwriting and document analysis, summarized in the 1986 Definitive Edition with, “The allegations that the Diary was the work of someone else (…) are thus conclusively refuted.” Similarly, the myth that Anne used a ballpoint pen (not yet available) was disproved by the Netherlands Forensic Institute, their tests proving Anne had used grey- blue fountain pen ink, thin red ink, with green, red, and black pencils for her annotations.

On 29 March, 1944, Anne Frank wrote, “Imagine how interesting it would be if I published a novel about the Secret Annex.” In less than a year, Anne was dead, but her words live on.