A Transformation At Amazon – Luv-Luv’s Story 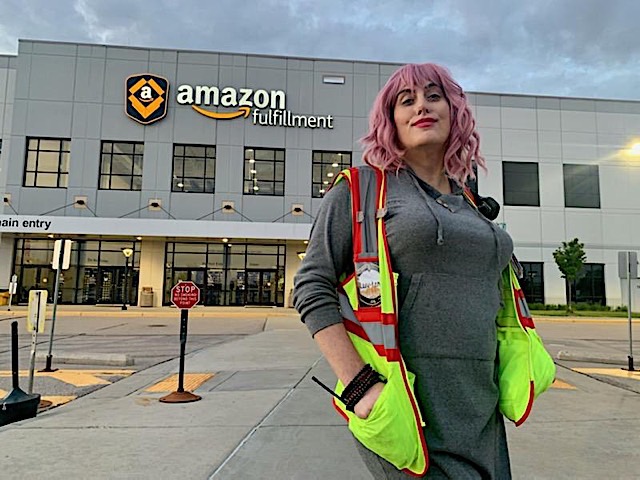 When you think of Amazon, what are the first things that come to mind?

They are not just a leading online retailer, they are also a leading employer anywhere they establish a physical presence. Amazon’s presence in Shakopee, among other communities, also means that they carry a progressive stance when it comes to their employees.

One such employee is Luv-Luv Morton. At Amazon’s Shakopee fulfillment facility, she is the first open, transgender, upper-level manager in Minnesota. “I lead a team of 63 associates to make sure we’re not only able to deliver to the customers,” explained Luv-Luv, “but that they arrive home safely to their families, better than when they came in here. So, basically, I’m a guardian over 63 associates making sure we get the customer their products but also that we do that in a safe manner.”

Luv-Luv is also the leader of the GLAMazon employee resource group at Amazon’s Shakopee facility. Under her leadership, the company’s LGBTQ employees across eight facilities in the Twin Cities have been quite active both inside and outside their workplace. Luv-Luv helped coordinate efforts to pack up backpacks for Bridge For Youth for Christmas. Plus, GLAMazon will be represented at Twin Cities Pride this year.

Employing trans people is a very important and crucial step towards a company’s evolution in terms of diversity and inclusion. It also means that companies are able to extend key benefits to their employees. The most recent IFEBP Employee Benefits Survey stated that only 21% of companies said they offered transgender-inclusive healthcare benefits. While this number has risen over the years, there are many companies that do not provide inclusive coverage to many of their employees.

In turn, Luv-Luv did find a workplace at Amazon. It did take some time to get there. “Slowly, over time,” explained Luv-Luv, “just anyone who has transitioned, their journey is not easy so any kind of bumps in the road I can’t fault someone else for my journey. That’s just trying to blame someone and I’m not into blaming. I take ownership of my own self and my journey. Has everything been perfect? No, because we all grew together and I think it’s been a huge journey for this facility to help grow with me and not against me. And so that’s been the sort of support I’ve received and that’s been my experience at Amazon.”

“I have worked hard,” said Luv-Luv, “and I tell anyone if you come in here and you stay positive and work hard; some people will say oh you’re just a number, well, make your number count. Now I can say listen, I was in your shoes and I know how it feels. So that’s what Amazon has given me is the opportunity not just to grow inside the company but outside the company. They’ve allowed me to really explore who I am without judging me, because it’s based on my work. It’s strictly just, we care but we’re not seeing that. I don’t think the Transgender thing has been an issue.”

Achieving her position as the first open, upper-level Transgender manager at Amazon in the state of Minnesota was, in Luv-Luv’s words, “a huge making history moment.” It was also transformative and positive experience. “I didn’t receive any backlash when I started but I think there were a lot of cis-straight gender people that didn’t know how to take me because they had never been around a transgender person,” explained Luv-Luv. “It allowed me the insight to say this is a huge platform to show people, like, I’m going to stick around so I can educate people. That’s the biggest advocacy work we can do, just being seen. Normalizing that because being Transgender is not an issue, just like gay used to be an issue and people wouldn’t even say it on TV, and now you see gay commercials. We have to get it to where it’s normalized, and we get to focus on our allies.”

Still, Luv-Luv has some ambitions for her future. “My dream would be to go to other facilities and see where they’re at in their process,” said Luv-Luv. “I don’t want to tell people how to run their facilities. I just want to see what we have at MSP1 (the Shakopee facility) that can help them because we have a great facility that always follows through.”

If you are looking to be hired at Amazon, Luv-Luv has some insights for you. “I think transgender people would be surprised to see the support they would receive from Amazon,” said Luv-Luv.” There’s a process we have to where someone comes in and they’re transgender, the area manager and [Human Resources] meets with that person (if they’d like to) to find out where they’re at in that process and what they want to share, if anything. Just kind of let that person know if they do want to share their process we’re here for you, and if not, we respect that.”

“We also have gender neutral bathrooms by [the security desk] so they’re welcome to use those,” explained Luv-Luv, “which is just such a great thing because when you’re transitioning, you might not feel comfortable using either bathroom. Also, coming in it is very scary because there can sometimes be a very masculine energy and if you’re going from male to female it’s like, you’re trying to get away from that energy. But I would say that it just makes a transgender person really stronger. That, to me, is what being a true woman is all about. We’re about strength, vulnerability, hope, nurturing, you know, and keeping the guys in line!”

Any workplace should be welcoming of all of us. Let Luv-Luv be your example of how you can thrive in the workplace – Amazon, included.