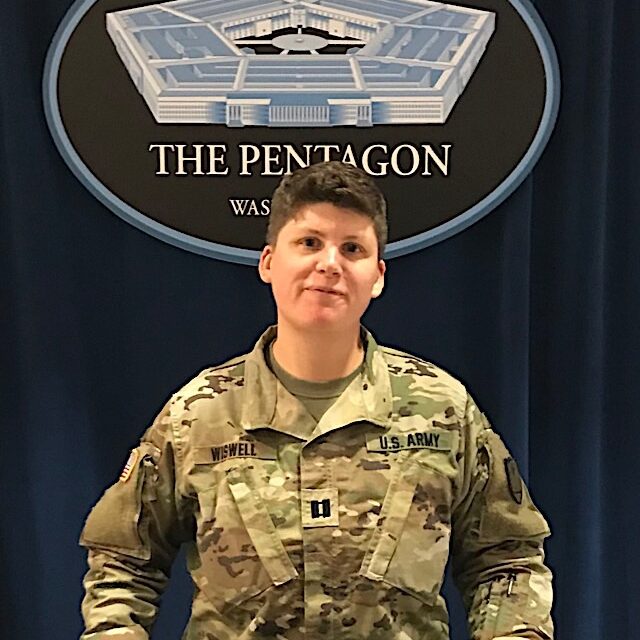 We don’t deserve the kindness and service of Captain Nic Wiswell of the Minnesota National Guard. She believes, “If you want somebody to get on your side and understand where you’re coming from, then you have to go to them first.” To understand the intensity of Captain Wiswell’s resilience and unrelenting need to serve with civic engagement, you have to understand the patience it took to make a dream finally come true.

Capt. Wiswell was born in a military hospital in Hawaii and grew up in a military family. Her father was a pediatrician in the army for 25 years. “It was great growing up,” Capt. Wiswell says, “there was always the sense of something outside of yourself and a sense of curiosity. Every place we went there was diversity in backgrounds and nationalities. That was something that from a very young age I was lucky enough to see.”

She always wanted to join the military and “feels very strongly that one gender, one political party, one demographic, should not have a monopoly on patriotism or military service.” However when Don’t Ask Don’t Tell was enacted it put a damper on her dreams. Her dream was deferred for 15 painstaking years until she enlisted the day after it was repealed. She chose the midwest as her adoptive home as one of the areas of the country she hadn’t lived in yet and began her military career. Although there were a few bumps after the repeal, “I’ve always felt very supported by my leaders and had great mentors. There’s never been a time where I felt excluded.”

The appreciation for differences was instilled at a young age for Capt. Wiswell so it’s no wonder that after 10 years of service she is energized with passion. Passion for a sense of community among those that wear the same uniform, because, “we are not uniform, there is strength in all our differences and we need to leverage that.” She is happy to report that there is now more awareness that the force only gets stronger though diverse perspectives.

“We have some people that come in because they want money for college, some people who have a family history, and we have some people who want to be part of something greater. None of those is more important than any other reason,” says Capt. Wiswell. Those perspectives she is all too familiar with as the Company Commander for HHC/334th Brigade Engineer Battalion and as MN NG Special Emphasis Program Manager in the State Office of Diversity and Inclusion. Positions that top off her impressive resume, supervising over a hundred soldiers and working with MN National Guard partners to promote inclusion. “If we all are thinking along the same lines and have the same background, we don’t get a lot of innovation that way.”

She has learned that perception, visibility, and representation, are such important things. She reminds us to stay resilient, “Keep trying, keep pushing, I had a long period of time where I thought I wasn’t going to be able to serve my country in this way, and just continuing to try, continuing to look for opportunities,” finally made her dream a reality. She couldn’t have gotten to where she is without the benefit of her relationships and advocating for mentorship. Finding those with wisdom to learn from and then passing it down. She is grateful for all the supportive mentors she has had and and proudly reports that the MN National Guard is pushing its leaders to find and mentor individuals who are different from them. “How can you lead somebody you don’t know?”, Capt. Wiswell asks. “Keep looking out for mentors, because they are there.”

She is an inspiration to silence your self doubt, “Let somebody else tell you no. Don’t limit yourself, try and reach out for that new idea, and let people know what you’re thinking. If it’s something that can’t happen or has to be reworked, let somebody else tell you that rather than being self limiting.” For her resilience, the representation she provides, and the relationships she has fostered, not a more genuine thank you for your service could be said.