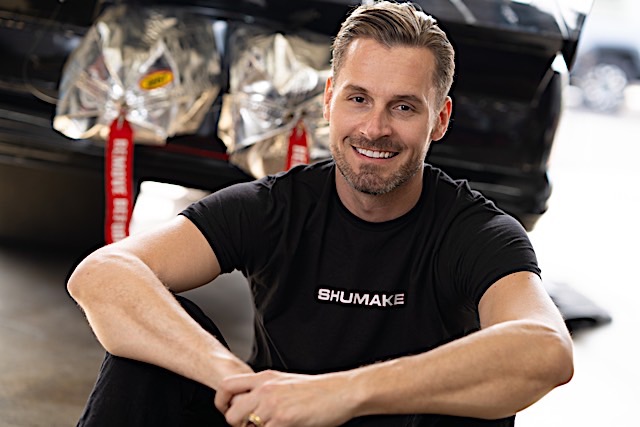 Travis Shumake is about to make history.

The son of Tripp Shumake, winner of multiple National Hot Rod Association titles, and Susie Shumake, a member of the Arizona Drag Racing Hall of Fame, Travis will become the first LGBTQ driver to compete in an NHRA event on August 12-14 at the Heartland Motorsports Park in Topeka, Kansas. He will run a pride-themed dragster at the Menards NHRA Nationals that weekend.

The specially-wrapped dragster is sponsored by Visit Topeka and Pride Kansas.

While honoring his family’s legacy in the sport of drag racing, Travis continues his mission to challenge the status quo in motorsports by bringing visibility to its LGBTQ athletes. He is already aligned with Racing Pride, an organization that is giving a spotlight to LGBTQ motorsports athletes and organizations that help raise bridge the gap between these drivers and their LGBTQ fans.

As Shumake takes his seat behind his dragster, I had a chance to catch with him to get his take on his post-coming out debut on the quarter-mile track. We talked about how this opportunity to run in the Menards Nationals came about. For one, Shumake made some connections to get his partnership with Visit Topeka and Pride Kansas. It became a statewide initiative to promote the state and Topeka as a diverse community for all of us.

One thing we came back to was the idea of the NHRA being a diverse place for motorsports athletes. “People don’t think of it that way,” Shumake explained, “…same thing with Topeka. We have that in common. People think of it being kind of the middle of the country, maybe not the most welcoming and inviting spot. Just like the NHRA, Topeka is open and welcome and friendly.”

The NHRA was one of the first motorsports organization to welcome women and BIPOC motorsports athletes. Today’s NHRA is also a multigenerational sport, with families racing against each other, such as racing legend John Force and his family. Shumake fits in the series atmosphere, due to his parent’s experience in the sport. In a previous conversation, Shumake indicated plenty of support from within the NHRA, including his competitors.

Through NHRA racing legend Randy Meyer, it all came together for Shumake to run in a famous dragster for the Menards Nationals. “We’re about 30 minutes from the race shop,” Shumake explained. “The car has a great history of doing well at this track. And so, it’s kind of a perfect storm for me to make my national event debut in a car that’s 50 miles from home that’s won five world championships.”

Looking ahead to that weekend, Shumake has a lot riding on this run. Preparation has been underway. There is more at stake than just running down Topeka’s quarter-mile track. “I constantly desire to prove myself,” explained Shumake, “and I have this feeling inside that I need to make a statement and do very well, and I have not had the best luck in this sport yet. If something could go wrong for me, it has gone wrong in the last year and a half between ripping a Funny Car in half, having my safety equipment stolen from the pits in Pomona, I didn’t qualify in Las Vegas, which is the first time Randy [Meyer]’s dragster hasn’t qualified in eight years. I am due for a solid successful weekend.”

“I believe it’s happening,” continued Shumake. “I can’t wait. And if it doesn’t, I’m okay with that. I’m ready to focus on racing and that’s what having Visit Topeka and Pride Kansas on board allows me to do in Las Vegas. I was on my way to qualifying at a bank, trying to get a cashier’s check, borrowed money from my sister to pay Randy Meyer for the car that day. To be in a position where a group believes in me and allows me to focus on not working the hustle all day, to just focus on driving and learning, I think is going to create a more wonderful environment for me to be successful.”

This is the moment we have been waiting for: A quarter-mile run in a fast dragster in Topeka for Shumake. We wish him nothing but the best that weekend in representing us well.