Anyone who claims to be a true lover of musical theater and music history must make the pilgrimage—a highly entertaining one—to the Ordway to bask in the sunshine of Yankee Doodle. That’s because it portrays the life of George M. Cohan (1878-1942)—the man said to have invented Broadway—who gave us such beloved tunes as “Give My Regards to Broadway,” “Over There,” “You’re a Grand Old Flag,” and “Yankee Doodle Dandy,” which remain popular still decades later. 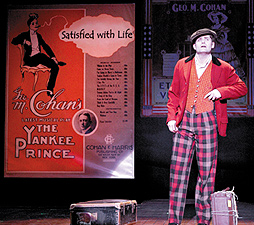 The Ordway show features numerous Cohan tunes adapted and/or arranged by Albert Evans, as well as a few songs Evans himself has created to round out the show.

According to Evans, Cohan “really did invent what we think of as the American musical, as opposed to an operetta with a sort of European plot and European-derived music. He was the first, really, to take American subjects, and bring the contemporary music of the street into the theater, which shocked a lot of people at the time. He wasn’t very popular with the critics at first. After about 10 years, they got used to it, and decided this guy was OK. But the people loved him right from the beginning. I think he was writing to an audience that some people thought shouldn’t even be in the theater—immigrants and ethnic populations that normally would have gone to music halls or saloons.”

Evans adds, “A lot of people who get credit for innovation are the people who first made a success of the innovations. I think Oscar Hammerstein is really the most significant figure in musical theater, and people always say [Rodgers and Hammerstein’s] Oklahoma! is really sort of the first modern musical. Well, all the elements of Oklahoma! were there before. It’s just that no one had had such an overwhelming success that made it commercially attractive to writers to write in this new mode. And I think that Cohan had done something of the same thing. There had been musicals with contemporary plots and songs, like the Harrigan and Hart revues from the 1890s, and the Mulligan Guard shows directed toward a really specific population, but no one had really crossed over.”

As McDaniel explains, “Our point of view is that George M. Cohan is the father of the American musical. He was the first to take melodrama, music, and dance, and put them together in a plot-driven vernacular. It moves like a revue, but it has vivid and poignant dramatic moments.”