Beware of dismissing Wicked as merely a commercial bonanza. It compares with cultural phenomenona like the films The Godfather and E.T., or the novels Peyton Place and Valley of the Dolls. Like it or not—and I love it—Wicked registers the barometric pressure of its time. The only American stage work of the past 10 years that might compare is Tracy Letts’s August: Osage County. In the 1990s, Rent was the equivalent. 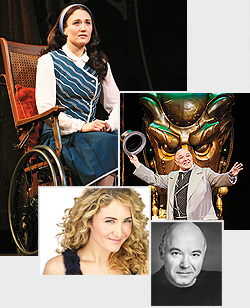 Based on Gregory Maguire’s novel, Wicked imagines an alternative back story about the witches of Oz. We consider just why the Wicked Witch of the West, dubbed Elphaba, may have been such a bitch, and that perhaps her rival, “Good Witch” Glinda, wasn’t all that nice. I sometimes wonder what Margaret Hamilton and Billie Burke—who portrayed the Wicked Witch and Glinda, respectively, in the 1939 film classic The Wizard of Oz—would have thought of Wicked.

In the 1970s and 1980s, Amendolia played Chanhassen Dinner Theatres and Cricket Theatre, and was a company member in the Guthrie Theater’s fabled Michael Langham era. He also has been at the national epicenter of queer-infused theater.

Reese hails from the Twin Cities southern suburbs. Only a decade out of high school, she has been on the road with Mamma Mia! and the Broadway revival of Les Miz, just to mention a few of her successes.

I recently spoke with Amendolia and Reese.

Amendolia observes, “Wicked speaks to not only adults who grew up with The Wizard of Oz, but to teens and tweens, because it’s all about being accepted. It speaks to racial issues, social acceptance, animal issues, women’s rights, and so many things—and especially young people. Some come back 15 and 20 times, because they see themselves in it. Teens and preteens always feel awkward and ugly and misfit in the group. It is, like the show says, looking at things another way. That’s a constant theme that keeps being repeated, and it’s true.”

About the show you’ll see at the Orpheum, Amendolia shares, “Maguire was very happy with it. He was actually at my first two performances in Schenectady when I started. He lives there with his partner, and they have some adopted children as well. He couldn’t have been nicer.

I first saw you in the original New York production of Caryl Churchill’s Cloud Nine in 1981, and soon afterward, you acted in and directed that comedy for Cricket Theatre, which then was the third major Minneapolis theater after the Guthrie and Children’s Theatre. Your production was a breakthrough in local Equity theater history for its bold queer and racial concepts. You played the little girl in both productions.

Yes. And the servant, in the first act, who must be played by a white man. It’s all about contradictions. Tommy Tune, the director, had other things to do, so there wasn’t going to be a company of it going out, even though it was such a phenomenon. It was for small venues. I became part of the contract, and that was how I began directing. It was licensed to very specific places, and part of that agreement was that I had to direct it.

Tell me about being in Terrence McNally’s Some Men.

That came out of the Sundance White Oak Project. That particular year was Some Men, and Grey Gardens was the other one. It changed drastically from the first production. It’s really about same-sex relationships, and a look at same-sex marriage. We all played many different parts. After that, it went to Philadelphia Theater with cast changes, and by the time it got to New York, Terrence and I were the only two that were constants. [Laughs] We had a different director in New York.

You were in Moises Kaufman’s multi-Tony-nominated 33 Variations last year. He’s a hero to the GLBT community because of The Laramie Project. What was that like?

A very interesting process. I’ve done it three times now with him. We actually didn’t have a script the first time when he showed up. Moises likes to do a lot of improvising, so you kind of write the script as a cast with him—literally, everything you say. By the second time we did it at La Jolla, it was typed, and then given to us on pages the next day to try the scene. A very unusual process, but very collaborative. Each time, the piece became better and better.

It’s about a musicologist who researches Beethoven’s Diabelli Variations, and it bends time. What was it like working with Jane Fonda?

She’s great. She’s wonderful. We’re good buddies. Great humility as an actor. Such respect for the process and the people she works with. And fun! She’s fun to be around.
Interview with Kristine Reese

Nessarose is in a wheelchair in the musical, but she has arms. Yet in Gregory Maguire’s novel, she does not have arms. Any thoughts about that?

I spent a lot of time focusing on the wheelchair aspect of the character. In the book, she doesn’t have arms. I think it’s just kind of impossible to stage not having arms for various reasons. I suppose technically they could have done something to make her have arms, but I think it would have just been really limiting to the actor. Maybe in a movie they could do it. It’s already hard not to have my lower body to perform. For the stage, it wasn’t really necessary. You get the point that she’s in a wheelchair. That’s my opinion.

That makes sense. But you still maintain that she has a disability.

That’s central to how Nessa sees herself. Does that disability have something to do with her possessiveness of Bock?

There are a couple of things I think it’s also important to note—and I hope I’m not tooting my own horn if I say this—but she’s supposed to be very pretty and lovely. Her clothes are very proper and buttoned-up. She’s the perfect student and kind of a know-it-all. I think she just kind of has this need to feel not above other people, but almost compensating for the fact that she’s in a wheelchair. So, I have to have the best grades. I have to look the prettiest. I have to be prettier than my sister. Definitely, with Bock, it’s like she had something that was hers.

Does her father being governor add social-class pressure that figures into her compensating?

And the fact that her sister is sort of an embarrassment to the family. Even though Nessa is in a wheelchair, you think she’d be, like, the black sheep. But actually, it’s her sister. Trying to fit in around all these people.

I think Michelle Federer, who originated the role, is quoted something similar to this when she was in rehearsals. I had to spend all this time in the chair, kind of just sitting around, and waiting for them to say, “OK, now we’re going to run it.” And it’s really hard, because even though I don’t have a disability, you are ostracized from the group, because you’re not up on your feet, walking around, participating in what’s happening, participating in the choreography. There’s a community experience in that aspect of the rehearsal period, and I wasn’t a part of it. On the one hand, it helped me with my character, but on the other, I was frustrated as a person of the cast. I felt separated from them a little bit. So, I can appreciate what it must be like to have to live like that.