When it comes to protests, marches, and boycotts, the GLBT community is skilled at showing righteous indignation. We do it well. Nothing is more motivating than taking to the streets to fight for our rights. In fact, protests recently were waged across the country where thousands of activists and other concerned citizens chanted “Say No to Hate,” or held signs proclaiming “Restore Gay Marriage,” all reacting to the devastating defeat to marriage equality in California known as Proposition 8. 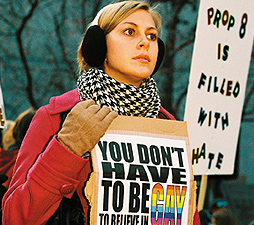 Stop for a moment, and think about it: Our community was asking to “Restore Gay Marriage.” The optimal word here is restore.

Why? The full marriage rights that the California Supreme Court granted the GLBT community were wiped away and reversed by a political campaign. Strangely enough, in a historic election where Americans saw the bonds of discrimination loosened, our community suffered a historic and pivotal setback when Californians voted to ban gay marriage.

The Associated Press reported that exit polls showed blacks strongly supported the ban on gay marriage, whites narrowly opposed it, and Asians and Hispanics were split.

What happened? The answer lies firmly at the feet of the GBLT community. The GLBT community and its allies let their guards down. While we know how to be underdogs, unfortunately, when our rights were put on the line, the GLBT community ended up snatching defeat from the jaws of victory. Trying to blame the Black, Asian, or Hispanic communities as well as senior citizens of all cultures is misguided. Simply put, we did not give them a reason to vote for relationship equality.

In politics, people need to feel an emotional connection—feel their vote really matters. Instead of playing defense against the “Yes on 8” folks, the “No on Prop 8” campaign should have been proactive, defining the message, humanizing it, and ultimately tailoring it in a way that each separate and distinct community would have been targeted. Once campaigns identify important communities, then bridges need to be built by finding common ground.

I spoke with someone close to the “No on Prop 8” campaign who told me it was managed by a committee composed of executive directors from GLBT nonprofits. Once I heard this, the first word that popped into my head was “disaster.” Political campaigns by committee often are mired down in process, rather than focused on getting results, and are not able to respond rapidly to the quick pace of political change.

The Los Angeles Times nailed the management problem in a recent editorial by citing, “…opponents of the measure ran a disorganized campaign that consistently underestimated the strength of the other side.”

How could GLBT leaders and the “No on Prop 8” campaign underestimate that when it comes to gay marriage, the forces of discrimination are ever vigilant—and, historically, well-financed?

If the “No on Prop 8” had gotten out in front of the issue, taking the time to build bridges to the black, Asian, Hispanic, senior, and other communities, the grassroots efforts would have been equipped better to handle the misinformation campaign waged by the opposition.

I do not doubt for a minute that those on the “No on Prop 8” campaign worked as hard as they could to defeat the amendment. What is troublesome to read and hear is the lack of taking responsibility for the defeat by the campaign “committee” or others in decision-making positions.

This is a necessary teaching moment for everyone involved in the losing end of any campaign—taking time to reflect, accept responsibility, and find out what lessons are to be learned, so the same mistakes aren’t repeated. It is at this point where credibility is restored, and the new campaign can begin.