Red wine is a staple dietary constituent in many countries throughout the world. As you may have heard through the grapevine (no pun intended), red wine is thought to confer health benefits to regular consumers. 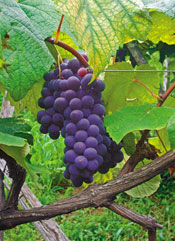 The so-called “French Paradox” may sound familiar. The French tend to eat high amounts of saturated fats, the bad fats that raise the risk of several chronic diseases, such as cardiovascular disease. However, the French have low prevalence rates for these same chronic diseases. The thought is that high red wine consumption by the French may provide a protective benefit against chronic diseases.

How can alcohol actually be good for us?

The benefits of red wine most likely have nothing to do with ethanol (i.e., alcohol). Resveratrol, the main component of red wine believed to be responsible for its health benefits, is a polyphenolic phytoalexin.

Polyphenols are potent antioxidants providing much protection against free radicals in the human body. Free radicals damage cells, DNA, and just about everything else in their path, which leads to disease.

Phytoalexins are antibiotics produced by plants in defense of invading microorganisms, such as bacteria or fungi. It is interesting to note that many plant “defense” mechanisms generate nutraceuticals for humans, and it appears that resveratrol is no exception.

Resveratrol’s health benefits in relation to chronic diseases (i.e., cardiovascular disease, cancer, diabetes, etc.) always have been considered to be a result of its robust antioxidant properties, and no doubt these antioxidant properties do play a role. However, more recent research has shown that resveratrol alters expression of a multitude of genes whose dysregulation leads to chronic disease.

This suggests at least a two-way punch for resveratrol, and without going into details, suffice it to say that the potential for resveratrol’s beneficial health effects are still under investigation, but seem limitless.

The idea that resveratrol increases longevity still is being researched actively, but recent observations are promising and quite interesting. Despite eating radically high intakes of fat and calories throughout their lifespan, rats given resveratrol were found to live just as long as rats not given the stuff. In other words, some of the negative health effects linked with all that junk everyone eats every day were wiped out completely. Cool!

Have you ever heard of calorie-restricted diets increasing longevity? Sirtuin 1 is at least partially responsible for these effects, so it appears that resveratrol consumption mimics a reduced-calorie state without actually decreasing caloric intake. Again…cool!
Foods with relatively high amounts of resveratrol include grapes, as well as grape-derived foods and beverages (e.g., grape juice, wine). Nuts also contain resveratrol, but a person would have to consume radically high intakes to receive any potential benefit. Resveratrol is found mainly in the skins of grapes. Red wine is fermented with the skins, but white wine is fermented without the skins, so red wine contains much higher amounts of this powerful phytonutrient.

I prefer to get my resveratrol the old- fashioned way, but if you hate wine or have something against alcohol, pure resveratrol supplements (derived from Japanese knotweed) are available at most health food stores. Alternatively, you actually could include a fruit (i.e., grapes) in your diet, rather than all the unhealthy crap most of us consume far too often. I propose a toast to wine and grapes—in moderation, of course.

Let’s just say that those Greeks knew what they were doing. They knew how to party, but they maintained a good diet of grapes and wine throughout their lives. I have a personal theory that they may have lived forever were it not for their incessant need to war against all rivals, killing most of them in the process.

This is no excuse to drink loads of wine every day, because the negative health effects of excess alcohol consumption are very real, but if you wish, it is an excuse potentially to do what the Italians do: Drink a glass with breakfast, lunch, and/or dinner (one to two glasses each day), starting early in childhood.

Now, that sounds like my kind of world. Cheers!