Every four years, the United States goes through a very tedious and unpleasant business of bashing respectable people. If you ever thought an ex did the most horrible thing, and told your current fling all the juicy gossip, try imagining a team of experts with millions of dollars researching every single thing you ever said or did (or didn’t) in your life, and then plastering it on every form of media the country has to offer. Welcome to US politics, and the race for the most powerful position in the world: President of the United States. The world may hate us for various reasons, but knows who our President is. Can anyone name the President of Canada? 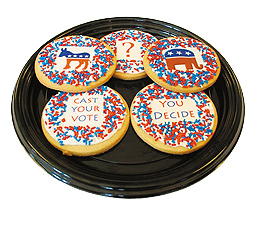 So, how is one to choose a candidate through so much dirt? Well, that can’t be answered here (Vote Perot!), but what can be said is that some yummy treats may “sway” your vote. Franklin Street Bakery has introduced patriotic cookies, which went on sale August 1, and will continue to be available until November 4.

Pastry Chef Lynne Hackman says cookies are “a collaborative effort on the part of the bakery leadership team. We wanted to create something fun and interactive based around the upcoming RNC and the 2008 Election.”

Each sugar cookie is made with white frosting; an edible image of either a donkey or an elephant that was printed on sugar paper with edible ink; and sprinkles of red, white, and blue jimmies. All that tasty sugar for only $1.50 a cookie!

The cookies can be purchased by visiting the store. They can be wrapped individually, or arranged on a party platter if you plan to have some patriotic fun.

So, with the cookies actually the same flavor, how have they been selling? Well, fine Minnesotans, it appears that we are a Democratic state, as the donkey has outsold the elephant with well more than a two-to-one margin in the first four weeks of production. But, once the Republicans take over the Twin Cities in September, the odds might change.