An explosion of colors, along with flashes of metal, rubber, spandex, and flesh, meet at a single point, all while continuing to spin and speed on their shared journey. When cover artist Tynan Kerr created his bright “blast” painting for this year’s Lavender Pride Edition, he imagined bicycle spokes—specifically those on the Minnesota Red Ribbon Ride, the 300-mile trip that raises money for Minnesota HIV/AIDS organizations each summer. The event is the beneficiary of the 2010 cover art. 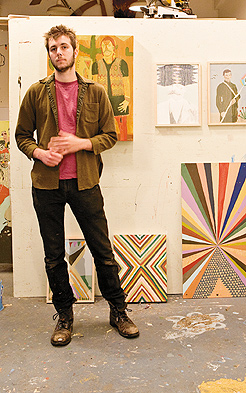 Kerr says about the piece, “I was thinking about the idea of a bicycle trip, the energy and motion behind it, all converging to a single point—the sense of singular intention. Everyone is reaching toward the same goal.”

The 25-year-old Minneapolis artist has been making similar multicolored patterns since he was a small child, honing his craft in college, but keeping to his traditional methods: using found paints, and setting his intentions to capturing a “blast of energy” somehow. The process is the dull opposite: a series of slow brush stokes in a meditative progression that Kerr finds relaxing and cleansing.

As Kerr explains, “My personal work is repetitive, and takes a long time. But each piece works out their logic, and then, they’re done.”

After all that work, Kerr sometimes just up and abandons a piece of his vivid work in a public space, hammering his paintings onto boarded surfaces, or leaning them up against telephone poles in obscure neighborhoods and parks for wandering souls to find or ignore.

Kerr relates, “I tend to think places need them. So, I put them onto forgotten spaces, or in forgotten places in the city.”

They fall down. They get thrown away. They get picked up, becoming the treasures of strangers. Sometimes, Kerr sees them again, and sometimes, they disappear. He loves every bit of the mystery.

Two years ago, Kerr decided to take his random art-gifting to a new level, after finding the perfectly strange, open space at Lake Street and Chicago Avenue in Minneapolis.

Kerr recounts with a smile in his voice, “I put about 90 paintings in a window and outside this space, about four or five per day, and people would take them. I like to think about their fate—maybe someone threw them away, or maybe they’re hidden around in domestic spaces across the city.”

As of late, Kerr has been using his solo work as means for personal cleansing, instead putting the bulk of his creative energy into collaborative work with his friend, Andie Mazorol. Together, they create crowds of inquisitive characters, their faces and wardrobes constructed in an array of brilliant colors, shapes, and shadows.

Slightly creepy, these men and creatures hide behind masks and blank stares, a hint of voodoo magic and untold postmortem secrets whispering under the layers of paint.

When asked if he, too, thought the duo’s paintings were amazingly eerie, Kerr chuckled and agreed: “They are kind of creepy. Andie and I have always had a half-joke but half-serious theory that a ghost figure comes about when we’re working together. Like, he becomes our right and left hands. Time will disappear, and something magic happens. Not always, but sometimes, we just get this totally creepy feeling—an energy—momentarily.”

Kerr and Mazorol began working together when they were roommates. Communal space and close quarters aided the natural transition between feedback and eventual collaboration.

Together, the pair have earned the 2009-2010 Jerome Fellowship for Emerging Artists. Their first major collaborative showing, Patterns, Plants and Animals, was at Rogue Buddha Gallery in Northeast Minneapolis April 2-May 1. They also are doing a commissioned mural on the side of The 331 Club, a Northeast Minneapolis staple.

Before setting up their canvas, the two artists look over images of “people who had power”: government officials and aristocratic figures. They combine these old images with found snapshots, thrift store photos, and totally anonymous invented people. Figures come in and out of the paintings, dusted over with fresh brushstrokes and new inspiration, sometimes leaving traces and ghostly shadows of their previous presence. These paintings are always big, a scale intended to accommodate space for two, and allow for simultaneous work.

Kerr shares, “We’re bouncing around the canvas together, and yes, it can be really confusing. We tend to fight a lot—especially if it’s a big project, and we’re painting all the time. We step all over each other, and ruin things for the other person.”

Four eyes and two separate visions, Kerr and Mazorol work independently, yet side by side. With no boundaries or preplanned routes, their final product never is premeditated. They simply allow their paintbrushes to speak in artistic silence.

Kerr remarks, “Things happen back and forth, and it all culminates into something neither of us expected. Maybe you would have held onto that detail, but instead, it got challenged, and you get pushed even further.”

When a piece is “done,” the debate between the two artists continues.

As Kerr puts it, “And when it’s finished, we don’t necessarily agree on what it is, where it is, or what it means. And that’s the subject matter of our work. We are both the artists and viewers of our work, meaning we have to think outside of either.”