Ryan Rollinson talks about dating as an HIV-positive man: “I’m generally attracted to guys my own age. Most of them have little or no education on HIV. They hear I’m HIV-pos, and that’s the last time we talk. It’s hard to get younger people to look past that, and to understand it’s just one part of me. It’s nice to find people to look past HIV, and see me as a person.” 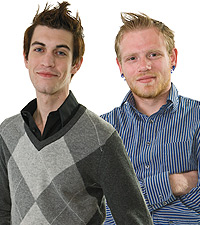 After years of decline, HIV rates are rising at an alarming rate in the younger generation. Since 2001, the Minnesota Department of Health (MDH) has recorded that HIV infections in young men have doubled, with white men accounting for more than half of the new infections, and African Americans for another 30 percent. Health officials also noted that the largest increases of numbers came from men ages 13 to 24.

For two young men, they became just another statistic. Clay Roberts has been HIV-positive for the past two years. He’s only 20 years old. Rollinson, now 22, is another young male who has been living with HIV for the past three years. He, too, was diagnosed before he reached the age of 20. Both men never have known a world without HIV, yet education and awareness of prevention have changed drastically.

“I was born four years after the AIDS epidemic began. I’ve never known a world without AIDS. You’d think we’d know better, but really seems like my generation doesn’t get it,” Rollinson relates.

When asked about HIV, Rollinson points out something many don’t see, saying, “I wouldn’t have said I was looking to get it [HIV]. I certainly didn’t care that much. Magazines with HIV med ads show rock climbers, and how everything is fine. It’s not until you actually are diagnosed that you realize there is a negative side.”

Rollinson currently takes one pill a day to manage the infection. Without the help of his insurance and the State of Minnesota, he would be paying $2,500 a month for it. And that’s just the financial side of HIV.

Roberts hasn’t begun taking medication yet, but, in his words, “I’m worried that if I start them, I won’t take them on time all the time. I have problems with memory when it comes to taking meds.”

HIV rates in Minnesota have been increasing yearly since 2003. Last year, they reached their highest number since 1995, with 325 reported cases. Most new cases were Minneapolis residents. Surprisingly, though, St. Paul wasn’t second—the suburbs were, with only five fewer cases than Minneapolis.

Roberts, who lives in Maple Grove, acknowledges that he believes everyone should practice safe sex, but knows lack of it was the reason he ended up getting HIV.

“I always practice safe sex now. I’m forward and honest before I sleep with anyone,” Roberts states.

Both these young men live in a world where they are told not to worry. They see ads for medication that makes everything OK. They see a myth that has changed their lives forever.

Though male-to-male sex is still the leading cause of HIV infections in Minnesota, it actually decreased in numbers last year as a reported reason for new HIV cases. Other reasons were drug use, or a combination of sex and drug use.

“I was a safe-sex Nazi until I discovered crystal meth. I was doing HIV counseling while having unsafe sex. I knew the risks of what I was doing, and was still participating,” Rollinson admits.

The young man used meth as a way to cope with the shame and discomfort he had about being gay.

“It was easier for me to engage in those behaviors,” Rollinson shares.

Roberts, too, was using drugs during the period when he was infected. After diagnoses, he used drugs for more.

“I was using drugs, and OD’d. I tried to kill myself. I wasn’t sure if I was infected by the drugs or sex,” Roberts recounts.

It took Roberts six months before he learned to accept his HIV infection fully.

“I went to treatment, got more aware about it, how to treat it, and learned you can live with it for many years without it causing problems,” Roberts reports.

Rollinson learned how he was infected around the same time he was diagnosed.

“Someone I was sleeping with on a regular basis was lying about his status. He was basically sleeping with people for revenge for his own HIV status,” Rollinson recalls.

With the growing emergence of drugs like meth, many Web sites that list tips on safe sex also have begun posting suggestions about how to practice safer sex while on meth. The drug is known to increase sexual desire, and prolongs it as well, leading to marathons of sex. It’s during these periods that people who normally would be careful about safe sex lose their inhibitions, or simply forget to use a condom.

Richard Rawson, a researcher and Associate Director of the Integrated Substance Abuse Program at the University of California-Los Angeles, explained in the Phoenix New Times News, “We’ve compared meth to cocaine, opiates, and alcohol, and have found much more of a connection between sex and meth than those other drugs. It increases sexual pleasure, it increases sexual activity, and it increases the extreme kinds of high-risk behavior that lead to HIV and other STDs—more so than any other drug.”

Rollinson, who started his meds shortly after he was diagnosed, and spent 18 months on meth, observes, “Doing meth and being poz was not good for me. I used my diagnoses as a good excuse to do more meth. I didn’t even try to get sober for about nine months after I was diagnosed. I’m doing what I can to stay sober. My HIV has very little impact on my daily life. I take a pill at night, and go in for blood work every three months. It hasn’t really negatively impacted my life. In terms of emotional stress, I’m fine.”

MDH data shows that one in three people who tested positive in 2007 were considered “late testers.” These people either already had AIDS or were diagnosed with it within a year.

Now sober, both Rollinson and Roberts have moved past their infections.

“It has given me a lot of opportunities for education. I’m always happy to talk to someone who might not know that much about HIV—correct some myths,” Rollinson comments.

Roberts, who has been clean now for 11 months, remarks, “I know if I ever went back to them, I would die from them. I’m normally up-front and honest with everybody. All my friends are aware. Just in case I cut myself around them, they know not to treat me without taking certain precautions.”

With supporting families standing behind both men, they’ve overcome much of the stigma that stands in their way, and have moved on.

Roberts sums up, “I used to want to do drugs and everything, and now, I want to straighten out my life, go to college, and become a drug and alcohol counselor. HIV is out there, and you can get it.”

Rollinson, who also has used his HIV as an encouraging influence, puts it this way: “I became a nursing major after being diagnosed. I realized I need to help people. [HIV] has given me a better perspective on that—a better understanding on what it means to help people. The HIV community has given me so much, so if I have the time and skills to give back, I will.”