Twelve Years Later: Marriage Equality (and Other Forms of Bondage)

Sometimes, it’s good to take a look back to see how far we’ve come on an issue—in this case, marriage equality—and also how far we still have to go. In that spirit, I’m going to revisit a column I wrote almost 12 years ago that appeared in Lavender on November 8, 1996. 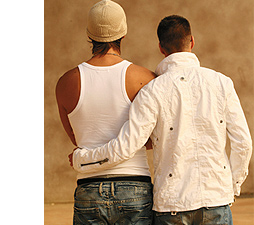 Closer to home, marriage-equality legislation was introduced in both houses of the Minnesota Legislature last May, sponsored by five senators (the maximum number allowed) and fourteen representatives, all of whom deserve a big “thank-you!” for their courage and support.

I started the 1996 column by saying marriage for same-gender couples seemed to have become a hot-button topic of discussion and activism in the leather community. One outgoing titleholder that year renewed his vows with his partner as part of his stepping-down speech. Another, a competitor in the International Mr. Drummer Contest in San Francisco, went on to win after marrying his partner onstage. But for the leather community, I wrote, same-gender marriage was really just the tip of the iceberg:

Relationships in the gay community in general and the leather/SM community in particular come in a rainbow of flavors the general straight public usually doesn’t consider. The leather community, in addition to woman/woman or man/man (and even, on occasion, woman/man) spousal relationships, offers such esoteric relationship choices as daddy/boy (neither of which is necessarily male, by the way) and master/slave. Adding to the richness of choices (or confusion, depending on your viewpoint) is that one person may engage in multiple concurrent relationships—one person theoretically could be someone’s boy, someone else’s daddy, someone else’s master or slave, and someone else’s spouse, all at the same time.

Certain elements of straight society find relationships like these threatening and subversive. They are so frightened by the form of these relationships, they never get around to investigating the content. If they did, they’d see the same kind of “traditional family values” they spend so much time talking about.

If we let someone else’s disapproval dampen our enjoyment of our culture and our relationships, we have only ourselves to blame. No one can oppress another without the other’s consent. To the extent we are secretive about the nature of our relationships, we reinforce to ourselves, and to the general public, the idea that those relationships aren’t acceptable.

The Stonewall Rebellion was about gays and lesbians questioning their oppression by straight society. It spawned a viewpoint that said: “We’re tired of not having the same rights as straights. When is it going to be our turn?”

The answer to that question is simple: It’s our turn whenever we take it.

But if we don’t take it, no one ever will give it to us.

More and more gay people, both leather and nonleather, aren’t waiting for society to legalize gay marriage, to “give us our turn.” They’re taking their turn right now.

The leather/SM and nonleather GLBT communities have taken society’s rulebook (in which marriage is defined as a lifelong monogamous union of a submissive wife and a dominant husband for the purpose of producing offspring), and thrown it away. We no longer are constrained by those rules—we are free to invent new kinds of relationships that meet our needs and the needs of those we love.

If two people of whatever sex and/or gender decide that a traditional monogamous marriage framework (with or without children) is what they want, fine. If another framework better meets their needs, that’s fine, too.

Legalized gay marriage will offer certain benefits (and also will entail certain responsibilities). But legislation won’t change people’s hearts and minds—they will have to change in order for the legislation to be enacted. And hearts and minds will be changed, one heart and one mind at a time, by enough of us being open and proud of our culture and our relationships: woman/woman, man/man, daddy/boy, master/slave, whatever.

Leather pride—or any other pride, for that matter—is when we can be open, honest, genuine about ourselves and our relationships, and not feel a need to apologize. And it’s a self-fulfilling prophecy—over time, society will get used to the idea that our relationships can be healthy, positive, and satisfying. Finally, in a stunning example of anticlimax, gay marriage will be legalized.