Billings was the first transgender actor to play a transgender character on American TV. Though she has now had her fill of playing trans hospital patients on their way to death, her episodes on ER, Grey’s Anatomy, and Nurses are still groundbreakers. She was the subject of the Emmy-nominated PBS documentary From Schoolboy to Showgirl. Her uproarious observations appear in the terrific Minneapolis indie film FAUX.

I spoke with Billings recently by phone. She was in Los Angeles, where she lives with her wife, Chrisanne Blankenship. 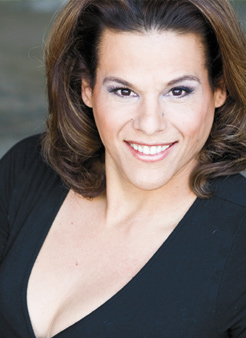 When I saw FAUX, the crowd roared during your comments about how gay marriage would spur the economy. What are your thoughts about the queer community as a potentially powerful economic force?

I think we underestimate ourselves, and always have. It’s very difficult for the gay community—and I use the term “gay,” and I encompass everybody under that umbrella, because the whole L-B-G-T/BLT sandwich—all of those letters just confuse me. I’m an old person. I like things simple! So, I’m just going to say “gay.”

And what we have to do as individuals is start speaking our truth. I mean: Come out of the closet! One of the ways that we can help our brothers and sisters do that is by extending a hand to the other side. And here’s what I mean: When the extremists come toward us, instead of throwing slurs or tossing rocks, what we need to do is extend a hand. I’m your neighbor. I’m your grocer. I live next door to you. Let me introduce myself to you.

Yet some of us play victim.

We need to put the victim thing aside. We not only need to put it aside, we need to call each other on each other’s crap. I’m approaching 50. In the ’70s, we were still hiding, steeped in shame, and our generation still holds that. I’m guilty of that.

So, we really need to look to that new generation. These kids with their iPods and the Internet—they’re smarter than us. They’re more eloquent. The only thing they lack is the human experience. They spend so much time with machines, texting and one thing or another, that they lack a lot of human touch. What they need to do is get in touch—and I mean physically and emotionally—with their own people. And I hope our generation will erase and relinquish and shed so much of our shame.