I haven’t mastered the concept of an afterlife, but here’s my hope: If any restaurants are there, at least one of them serves a heaping platter of fried cheese curds. And not just any fried cheese curds—after all, this is heaven—but instead, fresh Wisconsin ones, fried in a scallion and caper batter, served with homemade bacon ketchup. Forget the fruity abomination that dares call itself ambrosia—this is the food of the gods, and they will serve it to those who remain in the physical life at the Town Talk Diner. 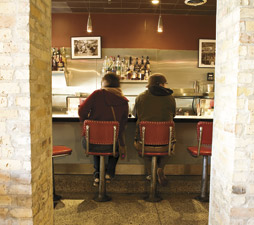 “We’re a finer diner,” our server says with a beatific smile, as he thrusts plates in my direction. Judging by the thick crowd that already has gathered on a Wednesday evening, Town Talk doesn’t struggle to win new converts. Fervent foodies of all types are flocking to the unpretentious diner, whose awning may as well read: “Abandon all hope of dieting, ye who enter here.” The luscious duck bombs ($8.50) would have tempted Gandhi.

To eat at the Town Talk is to take part in a feel-good pilgrimage—to pop a hot sourdough-battered onion ring ($5.25) in your mouth, and hold it there for a moment of deep epicurean contemplation before sinking your teeth into the soft onion flesh.

Yes, one could skip the decadent appetizers in favor of the salads, all of which are lovely, but…when in Rome. In this case, two such Romans were sitting directly behind me, as my dining companion and I plowed through the farmer’s platter ($11.95), trying not to fight over the spicy olives. These two ladies were in a state of bliss over the frickles—fried homemade pickles with mustard dill sauce ($5.95)—and they were so outspoken in their pleasure that it was impossible not to overhear.

Our table, however, was perfectly contented with Town Talk’s new salads, including duck confit ($13.95), roasted root vegetables ($11.50), and bacon-wrapped pears ($9.25). My eagerness got the better of me, so I immediately downed the whole bacon-wrapped pear. It was impetuous, but worth it. The roasted vegetables are not to be missed: tender yams, potatoes, onions, parsnips, and carrots, splashed with vinaigrette, and served over arugula and avocado. 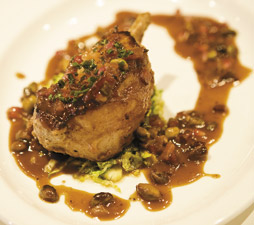 It’s in the salads and entrées that chef Tony Callies stretches his legs. His cooking is influenced by the Philippines, and his flavors are accordingly dynamic. However, in a profession rife with narcissism, he is humble and pragmatic. Though he definitely has made his mark with delectable pork candies, many mainstay appetizers are the inspiration of his predecessor, David Vlach. The styles of the two chefs are noticeably different, but the menu is a wonderful marriage of both.

Callies says of Vlach’s appetizers, “They’re so fantastic, why would I want to get rid of them?”

The diner’s current entrées, however, are entirely Callies’s creation. We were served the blue cheese meatloaf ($15.95), pan-roasted chicken ($16.95), brined pork chop ($17.95), and truffled macaroni and cheese ($14.95), as well as two specials: rib eye with horseradish cream sauce, and halibut perched atop red grapefruit beurre blanc. It wouldn’t have occurred to me to order fish at a diner, but it was fabulous. I also must admit favoritism toward the pork chop, glazed by a caramelized cider jus.

For his cooperative approach to the menu as a whole, Callies is passionate about his own fare: “I don’t put more than five flavors on the plate. If you can’t make it work with five flavors, you’re just wasting your time.”

Callies, who also is dedicated to maintaining a chef-driven kitchen, understandably was anxious when Theros Restaurant Group purchased the diner recently.

However, as Callies remarks, “They’re a really good group of people. They have huge numbers, and the only way you can do that is streamlining everything, and taking some of the character out of it. But after two days, I knew they were going to leave us alone.” 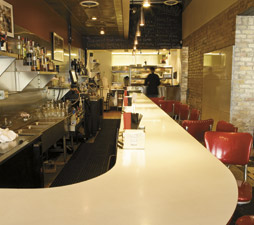 Those who just pop in for drinks and dessert are in for a treat. Bar manager Nick Kosevich’s cocktails have a depth of flavor that one seldom finds in a tumbler. A dense carrot cake ($6.50) and a chocolate polenta cake ($7.25) surprisingly were outdone by the cup of joe—a kicky, coffee-spiked crème brûlée served with biscotti ($6).

Even if diner food isn’t your thing, Town Talk is more than just a dressed up burger joint. I may not have seen the Madonna imprinted on my biscotti, but to eat there is to find depth in simplicity, to find the divine in the sinful. In short, if you are finding this holiday season a bit long in commercialism and short in inspiration, a plate of frickles may do you good.