Marlon Riggs’s Tongues Untied, a groundbreaking 1989 documentary of black gay life, is the inspiration for two different but connected phenomenas. At the University of Minnesota, Jason Jackson and Cortez Riley cofounded and cofacilitate Tongues Untied, a group that took its name from Riggs’s film, to support queer people of color. It will present Fierce Love, a classic showcase of hilarious and touching vignettes and stories by the legendary Pomo Afro Homos, comic actors whose vision was impacted by Riggs’s documentary. 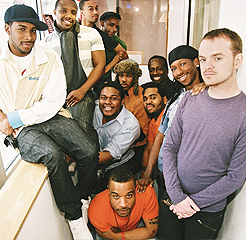 Tongues Untied open discussion often leads to what Riley says are “issues of tokenism, exoticism, and the pressure to choose between racial or sexual identities. Through this, we learn how to articulate and combat racism and homophobia within our communities. Having a room filled with racial minorities, I find that we have more in common with each other than not. The name Tongues Untied represents the idea that we can verbally affirm our existence in both our racial and LGBT communities.”

Jackson, who calls the documentary “revolutionary,” observes, “Riggs and his colleagues officially untied their tongues surrounding issues pertaining to the intersectionality of race, ethnicity, and sexuality. They used their bodies to assert that black and gay was and is beautiful, which had never been done in mainstream America. They discussed police brutality, sex, and the general ontology of black gay men. Despite this documentary only focusing on black gay men, we interpreted Tongues Untied as asserting that being an LGBTQ person of color is something positive and beautiful. As such, Tongues Untied is now a reality.”

To celebrate Black History Month, Tongues Untied is producing Fierce Love, in which Jackson and Riley are acting.

A generation ago, in the early 1990s, the creators of Fierce Love, the Pomo Afro Homos trio of Djola Branner, Brian Freeman, and Eric Gupta, was adored by progressive audiences, but derided by Republican US Senator Jesse Helms’s campaign against publicly-funded queer-themed art. The group played the Walker Art Center to full houses. Branner has said that they began as a furthering of the conversation begun by Tongues Untied.

Harry Waters Jr., director of the Tongues Untied production of Fierce Love, was germinal to black and queer performance on the national scene in the early 1990s, when he played the original Belize in the Broadway staging of Tony Kushner’s Angels in America.

Last year, Waters directed a revival of Fierce Love that was named Best Revival in my December 16, 2010, “On the Townsend” column, and for which he also was named Best Director. A driving reason was the staging’s ingenious recreation of a not-too-distant but still-very-different period in time and culture. Yet his cast beautifully blended in current concepts like 21st-Century-Hip Hop. Waters had to educate his young actors about what are now subterranean and archaic practices, like the use of different-colored bandanas as a coded signal for the kind of sex a gay or bi man was into.

Some of last year’s actors will be returning, and some are new. What struck me so viscerally last year was the vivid, polished results Waters got from young men with little or no acting experience. The performance was every bit as professional as something at the Penumbra, Guthrie, or Jungle theaters.

When I asked Waters how he achieved such results, he responded, “I believe in the power of telling your own story, and in finding the context of being able to show that in a very honest and truthful way, but also in a very theatrical way. That then makes a connection to a larger part of the community.”

Waters’s actors likely will tell you they have a direct empathic connection to their roles. Though GLBT rights have progressed notably over the past two decades, homophobia still is entrenched in both Caucasian and non-Caucasian communities.

Waters explains, “In one of the pieces in Fierce Love, titled ‘Silently Into the Night,’ a young man talks about finding his best friend in the hospital dying of AIDS, and then, the family comes and takes over the funeral. They don’t respect any of the GLBT friends who were in his real life and lived experience. And there are so many young men now who have also experienced that with their families who have not acknowledged their lived lives. But they want to take over the celebration at a funeral, and disrespect or disremember who and what [the deceased] was, and what they actually did. And that’s still going on today.”

Much work and consciousness-raising remains to be done to solve the problem. By attending Fierce Love, and discovering what Tongues Untied has to offer, you can part of the ongoing solution.