Tim Marburger 2008 Person of the Year

I considered myself very fortunate to receive complimentary tickets to the Red, White & Black Masquerade Ball hosted by The Aliveness Project (TAP) this past Halloween. Visiting The Woman’s Club of Minneapolis, enjoying top-of-the-line hors d’oeuvres, dancing, and participating in a silent auction promised to be a new favorite way to enjoy the holiday. However, I didn’t feel that I deserved the comps. Yes, I contributed to TAP’s annual Holiday Basket Program, which delivers baskets of presents and baked goods to hundreds of individuals living with HIV and their families. But, like so many self-employed people these days, my income has dwindled, while my expenses have skyrocketed, so my only contribution was homemade cookies. I do make a good oatmeal and chocolate chip cookie, but I feel that hardly qualifies me to attend such an event as the ball. 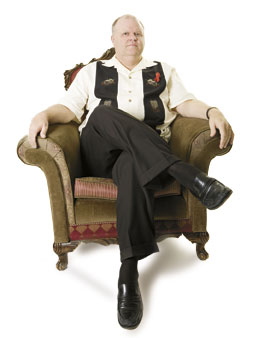 It was with mixed feelings, therefore, that I donned my “Vampiress” costume—a Victorian bustle dress made out of leftover taffeta, a quick updo, and two fang marks created with a black eyeliner pencil and a dab of ruby red lipstick. My “date” for the evening was another Lavender person. Both of us felt undeserving of the outing, and neither of us knew quite what to expect.

Yet, when we walked up the steps to The Woman’s Club of Minneapolis, we were given such a warm reception, I promptly forgot my hesitations. The space was decorated elegantly according to theme with elaborate feather and crystal centerpieces. After watching costumed dancers perform a spectacular flamenco number, I drifted in the direction of a lavish hors d’oeuvres table to socialize with friends.

It was a masterfully planned event, and as I wondered aloud about the person who orchestrated it, Tim Marburger, TAP’s Director of Fund-raising and Special Events, approached our little group, and put out his hand.

Marburger is not the kind of person one would expect to enjoy pulling off events like these. Wedding planners like those pictured on the Style Network’s Whose Wedding is it Anyway frequently seem to have issues with control and perfectionism, and their extreme drive is evident in everything from their vocal patterns to their crushing handshake. Marburger is not like that. Instead, he exudes a serenity that is difficult to imagine, given his job and the current recession.

In our interview, when I ask Marburger how much money the night’s silent auction raised, he says with a sigh, “Not as much as I wanted to. I think the economy played into it,” yet is quick to add, “But everybody seemed to have a great time.”

Marburger seems to have that rare talent for seeing things as they are, accepting them, and maintaining a positive attitude. With the amazing range of services TAP provides for its clients, having such a person on the team must be a godsend.

The organization, which Marburger describes as being “the best place in the whole world,” is itself a marvel, providing hot meals, care advocacy, prevention services, complementary care, and access to a food shelf for Minnesotans living with HIV.

Despite the best efforts of prevention services across the state, the reported number of new HIV infections in Minnesota continues to grow. TAP assists approximately one out of four of those affected.

“We’ve grown so much that we’ve seen about a 9 percent increase over last year in the use of services. Last year at this time, we were taking in roughly 14 members a month. This year, it’s 18 to 20, and sadly, it’s a lot of young people and women of color,” Marburger reports.

The current economy hits HIV patients as well as the organizations that were created to help them. So, having a program like TAP that offers something as simple as a hot meal and a food shelf—along with many other services—is incredibly important.

“A lot of folks say, ‘When I pay my rent and medicine, there’s nothing left,” Marburger relates, but for him, what makes his organization so special is the sense of community it provides.

In Marburger’s words, “It’s a place for people to gather and be themselves. So many people aren’t out about their status, whether at work or in the family. And to carry a secret can really weigh on one.”

TAP is hardly alone in its mission of providing services to people living with HIV, and that is a wonderful thing. But that cooperative spirit comes with its own frustrations for someone in Marburger’s position. 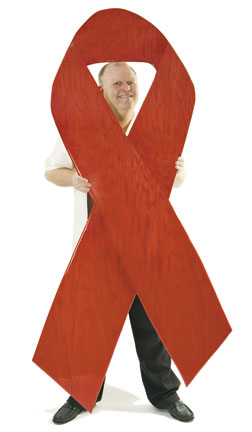 Marburger then tells me just the other, day a letter was placed on his desk that was intended for a different AIDS organization entirely—“It happens sometimes,” he shrugs.

Events like the Red, White & Black Ball build awareness as they raise funds for TAP, but it’s a labor of love from start to finish.

“Getting ready for an event—whether it’s Dining Out for Life or something like that—is a lot of phone calls and touching base with people, interspersed with making sure that the florist is choosing the right things. And then, someone stops by who has never been to The Aliveness Project, and says, ‘Hey, can you give me a tour?’” Marburger explains, all in one breath, pausing to gather strength, and continuing, “And then, a phone call comes in, and it’s triage, but the social workers are out on a training, so I’ll try to help things out, and figure out what’s going on. Then, I’ll go down, and have a wonderful meal for lunch, and start all over again.”

Marburger’s days are filled to the brim, and his evenings often are snatched up by more fund-raising events, public and private.

When I ask Marburger about his personal life, he laughs, “What’s that?”

As Marburger also serves as a youth minister with a local church, certain things have had to take a back seat for the moment. But from the way his voice changes when we shift back to TAP, I know he wouldn’t have it any other way. His mission at the organization is a very personal one for him.

“I had a cousin die of AIDS in ’96, and I wish there would have been a place like this for him, because he would still be alive if there were,” Marburger shares.

So, despite the numerous career paths Marburger has traveled, including ministry, education, counseling, and social work, it is natural that he ended up where he did. But it was not what he anticipated when he began volunteering as TAP’s Tuesday receptionist. Gradually filling in as requested, he did some data entry, then coordinated a few trips, and eventually ran his first Dining Out for Life event six years ago.

Over the many years Marburger has been working at TAP, his impact on the organization has become immeasurable, but when Lavender contacted him about his being chosen Person of the Year, his first response was a humble, “You must be kidding!”

Marburger clarifies his initial reaction this way: “It’s only because I believe passionately in what The Aliveness Project does that I’m even in this position. When I’m passionate about something like my youth at church or the people we work with at Aliveness on a daily basis, that’s what keeps me going, and keeps me out there, because I don’t want the doors to close. I want people to hear and know about The Aliveness Project, and know what we do, and believe in it as passionately as I do.”

As we continue the interview, Marburger remarks that he told his mother about being honored by Lavender. She must be the source of his no-nonsense mind-set, for she immediately asked, “What does that mean?”

Marburger’s answer: “I’m not sure. But it feels very unique to be in the company of Debra Davis and all the other folks who have been it. I’m just a behind-the-scenes kind of guy. So, I’ll just smile, and say, ‘Thank you.’”

Although Marburger may be behind-the-scenes, anyone who has attempted to orchestrate an event like the Red, White & Black Masquerade Ball knows that the people who spend their time making phone calls, raising money, and arranging all the details are the ones who keep an organization on its feet. And for TAP, that results in a hot meal, alleviating pain, and creating a fellowship that’s hard to get anywhere else.

It’s a rare person who can find God in the details instead of the devil, but Marburger seems to revel in it, observing, “Doing God’s work isn’t necessarily inside a church—ministry is everywhere.”

TAP is always in need of volunteers with any and all skills. To donate your time, expertise, or funds, visit <www.aliveness.org>. Additionally, this year’s Holiday Basket Program needs seasonal volunteers to deliver baskets, pick up donated goods, wrap presents, and bake cookies. Running errands or baking a few dozen cookies doesn’t seem like much of a contribution, but so many people at TAP have assured me that it can mean everything in the world to the recipient. It is a lesson I hope to carry with me. And next year, I hope to feel more worthy of an invitation to the ball.

So, I would say to Tim Marburger to take a bit of his organization’s own medicine: His contribution is worthy enough to be recognized. Countless people derive joy from the services that he helps make possible. It is Lavender’s wish to honor him this year for being just who he is, behind-the-scenes and all.