January 20, 2009, will be a historic day. President-elect Barrack Obama will be inaugurated into office, the first African American President of the United States of America. Another monumental event will happen on this day for the GLBT community. For the first time ever, a GLBT group will be included in the 56th Annual Inaugural Parade in Washington, DC. 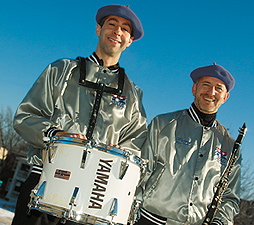 This year, the Lesbian and Gay Band Association (LGBA)—a musical organization made up of gay and lesbian concert and marching bands from cities across the United States—will be marching in the Inaugural Parade.

Two members of the Minnesota Freedom Band will be marching with LGBA. Harvey Zuckman will play clarinet, and Tim Schleicher will play percussion. One member of the Minnesota Philharmonic Orchestra, Ann Marie McIntire, will be playing bells. These three will be part of the 177-member LGBA group marching in the Inaugural Parade down Pennsylvania Avenue to the White House after Obama’s swearing-in ceremony on the steps of the Capitol.

“I am honored to invite these talented groups and individuals to participate in the Inaugural Parade,” Obama stated in a press release. “These organizations embody the best of our nation’s history, diversity, and commitment to service. Vice President-elect Joe Biden and I are proud to have them join us in the parade.”

Zuckman says, “I believe that being given this prominence clearly sends a message that we have an honored place at the table in the Obama-Biden Administration that is both symbolic and real. This level of inclusion goes well beyond tolerance and acceptance in my mind.”

Schleicher notes, “When I found out that the LGBA had been invited to march in the parade, I was elated, but not too surprised, given that Obama has said that he would be a President for all Americans, even mentioning in his victory speech the gay community among his many supporters. Marching in such a momentous event as the Inaugural Parade and being the first GLBT group to do so is truly an honor!”

McIntire adds, “I feel part of something big. Having grown up in the 1960s in Chicago, and knowing how minorities’ civil rights were shamefully treated, I am in awe at the distance we have come as a nation. We have a ways to go toward justice and equality, but electing Obama is an enormous step.”

All participants in the Inaugural Parade are responsible for their own transportation and boarding. If you would like to help support LGBA and its participation in the 56th Inaugural Parade, visit www.gaybands.org.