Ten years ago, the musical comedy The Temp was a Twin Cities theatrical sensation, receiving overwhelming rave reviews, and selling lots of tickets. Spoofing corporate culture, it reminded us fantasy and passion are underneath the surface of a society mandating suppression of all that. 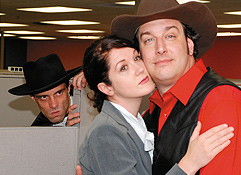 Playwright Brian Kelly recalls, “It was the first thing I’d ever written. I remember standing backstage listening anxiously to see if the jokes would land, and the feeling of glee when they did. There’s a bit of known quantity going into this production, which, combined with the experience, allows us a certain creative confidence that we probably didn’t have 10 years ago.”

Kelly wrote The Temp after having done a lot of temp work, which, of course, is not very glamorous. It got him to thinking about the classic Western movie Shane.

In Kelly’s words, “The mysterious stranger comes in, impacts the lives of the people he meets, saves the day, and then moseys on. He’s heroic and iconic. And I started thinking: Why not the temp as a hero? The reality of temping is that you’re sort of undervalued, and because you’re not going to be there very long, no one’s really invested in the ‘relationship.’ I tried to take this low-rung position, and make it something epic. There’s irony in that, but it’s also sort of a genuine celebration of the average worker.”

That celebration is infused with composer Todd Price’s music.

Kelly, who wrote the lyrics, says, “What makes the show work is what Todd writes, despite the lyrical content. For example, I brought him these ridiculous lyrics, and said, ‘This is the love theme.’ Todd wrote an incredibly beautiful song. It’s not a parody of a love song. It’s very genuine. There are times where the audience gets caught up in the moment, which is right when we hit them with something very, very silly.”

Price adds, “The main influence for the music was the lyrics. For me, the natural way to write songs is to start with the lyrics. When the lyrics are good, the music seems to come naturally to me. And Brian is a master at writing good lyrics, so my job was easy.”

That said, Price has a vast background in various musical genres, which is central to The Temp’s power, given that it’s a genre spoof, and pokes fun at musicals. You’ll recognize the influences of hits as varied as Oklahoma! and The Phantom of the Opera. It has a swing tune, a flamenco number, a love ballad, and a dream ballad.

Kelly, who also plays the leading heroic role, will be joined by Carolyn Pool, a master actress of various genres and styles herself, in the role of Ms. Swanson. Pool has impressed with her classic American roles in Born Yesterday and A Streetcar Named Desire, as well as in offbeat goth camp with Macabaret. She played in Ebb and Kander’s gritty musical Chicago last summer at Paul Bunyan Playhouse. She’s new to The Temp.

Pool compares her role to the fabled ugly duckling: “She’s the woman who gave up a lot of her personal goals and dreams to be successful at her job, and through the story of The Temp, she reconnects with that part of herself.”

That need to reconnect and to enjoy ourselves is a major reason we go to theater. So, given the continued negative effects of corporate life, it seems like it’s a good time to revive a comedy that clears a path out of this—the path of human imagination and fantasy. Indeed, The Temp would be the ideal show to take your cohorts at your workplace to see.