An Interview with John Cameron Mitchell

John Cameron Mitchell is a pioneer in the exploration of human nature and its relationship to sexualities. The 2001 film version of his 1998 OBIE-winning stage musical Hedwig and the Angry Inch, which has become a countercultural phenomenon, is arguably the most influential film ever to wrestle with transgender identity. Not only does it reflect on homophobia in the military, but also it now resonates with the current same-sex marriage issue in a way it did not eight years ago. Mitchell directed, starred in, and cowrote the film. Stephen Trask wrote the music and lyrics, and cowrote the screenplay. 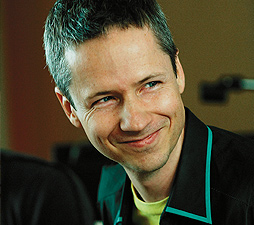 The story: Hansel, an East Berlin “girlyboy,” falls for Luther, a studly American soldier who demands Hansel have a sex change so that they can marry and move to the United States. Once stateside and living in a Kansas trailer park, Hansel, now Hedwig following a botched gender reassignment surgery, is abandoned by Luther for a man. Hedwig forms a rock band, but has man troubles again in the form of Tommy Speck, a Christian teen who steals his songs, and turns them into hits.

On February 5, Mitchell will be at the grand, glorious, and ornate Heights Theatre as part of The Talkies series to give a commentary on the film that won accolades at Sundance, was named Best Directorial Debut by the National Board of Review, and won a Teddy for Best Gay Film at the Berlin Film Fest.

I spoke with Mitchell about the ideas and influences in Hedwig and his other extraordinary film, Shortbus.

Since you grew up on military bases, I wonder how much that influenced the world Hansel/Hedwig lives in before he meets Luther, the soldier. Does that come from your military upbringing?

Yes. Of course. I grew up in that environment, and that’s the world which Hedwig falls into. My father was a military commander in Berlin in the ’80s before the [Berlin] Wall fell down. I grew up on army bases, so that world of supermasculinity, a kind of socialist state, takes care of the individual if you give yourself up to it. There were definitely homoerotic undertones—also very religious. It was how I grew up—very conservative Catholic schools and Catholic upbringing. In a way, that was my East Berlin—my socialist state that I was trying to get out of.

But your family was US military, so how was that socialist?

Well, the military is the closest thing that we have to a true socialist state in our country, because it took care of housing and medical [expenses]. Purportedly, it’s a meritocracy, and it’s the place where people on the lowest rung of society can start out, and by hard work, theoretically, climb above. So, in some ways, even though you have a very conservative cast to the people who join the military, in many ways, it’s the closest thing to a communist state that we have.

Do you still hold the platonic idea that you put forth in Hedwig a decade ago about being separated from your other half?

Yes, that’s still a very powerful myth in my life and in so many people’s life. No matter what reality tells us, the idea that there is someone we were separated from and need to reunite with is very strong. It’s almost a need for the myth that’s more interesting than the reality. And, of course, there’s the gap between the reality and our need for it. [That] is where, of course, drama lies, in that conflict, in that gap.

In Hedwig, we find the myth interpreted in different ways during different parts of the story. So, in the end, there’s a kind of internal reunion that happens, a kind of wholeness that starts to happen through the breakup, really—through the lessons learned from the difficult relationship with Tommy, and, of course, even with Luther to a lesser extent. In the stage piece, you see Hedwig becoming Tommy at a certain point. And the idea is that we are the sum of everyone we have loved. I guess this informs the piece. And a kind of inner wholeness has to be sought before we can join with someone else.

So, the myth remains powerful to Hedwig, even when she’s alone, but looked at in a different way. And it remains important to me, too. I’ve had my ups and downs in my love life, but the necessity for a reinterpretation of that myth happens all the time, and what people take from it is often very individual. And I’m surprised at how universal it’s been—going to different countries, and seeing how people in Korea and Turkey and Brazil find some kind of common ground in the story of Hedwig. That makes me really happy that that happens.

Shortbus is one of my favorite films of the past 20 years. Why are people so afraid of it?

Yes. I have a lot of acquaintances and colleagues who haven’t even been able to bring themselves to watch it. Obviously, it’s inner fears, because they haven’t seen it yet, so they don’t know what it is. A lot of people are scared of it because of where it goes sexually, or where they think it’s going to go sexually.

Shortbus is the most liberatiing, holistic and positive view of sexuality I’ve ever seen on screen. So freeing! We are so drenched in sexual guilt in our culture and Shortbus pulls the rug out from under all of it.

I grew up with alot of sexual guilt within a Catholic environment, which is guilt about sex in general, but also homosexuality. So it was a kind of double thing. Being gay actually saved me from an unexamined, perhaps more complacent, perhaps more limited life than I might have had if I hadn’t been gay. It forced me to question all kinds of things, of received notions about life. It was a little rough along the way but I certainly didn’t have it as hard as many people, being gay. But it was a kind of self-loathing that comes from an awareness of who one loves and how one loves. How one wants to love, that certainly straight people share in a different way. I just wanted to free myself from it (self-loathing). So living my life was one way of freeing myself. And other way is looking at it in my work. Alot of the people involved (in Shortbus) also came from a very restrictive view of their own bodies and hearts. And they wanted to join in this journey. So together we really mapped out these characters’ interactions and back stories and goals, emotional goals. And I wove them together into a script. It was a perfect aesthetic experience. We came together to face these fears in ourselves and other people. It’s hard to loosen up those ties that bind us to unhappiness about ourselves. It’s very much a part of the journey for all of us. And many people continue to be frightened of what we did, sight unseen. But those who found themselves going there, found that the trip was worth taking. Sometime when I’m feeling down, it means alot when someone says something like what you just said. I remember standing on a subway platform in New York and a guy coming up, giving me a little piece of paper, and getting in a train and disappearing. The paper said “Shortbus saved my life. Thank you.” I have no idea what that meant to him but it was something I keep in my wallet.

I think some people may fear, when they hear a little bit about Shortbus, if say they’re older, middle-aged or older, they may have regrets about not having explored sexuality when they were younger, no matter what their orientation. It could elicit regrets from those who say ‘I’m too old to explore that. That’s something youth does.’ Which is something you’re not saying of course. In fact there’s the older mayor figure (Alan Mandell) in Shortbus and he’s amazing. Shortbus shows that sex is this marvelous wonderland that can be beautiful, not terrible, even though we’re always told it’s evil and terrible and unhealthy. I think so many, many, many older people carry lots of regrets about not having explored sex.

I never thought of that.

And you also used music in Shortbus sung by Anita O’Day and are one of the interviewees in the recent acclaimed documentary Anita O’Day: The Life of a Jazz Singer.

Anita was one of the few white women who was considered to be one of the best jazz singers. She had a hard life. She came up from the wrong side of the tracks. Everyone thought she was black when they heard her on records in the ’40s. Her first hit was in 1941. I was always into her. There’s a longing in her voice. She was a powerful scat singer, stylist. There was this sadness underneath the fun. But she certainly had fun. You know, she was a heroin addict for a long time, so she really lived  She was this hard-as-nails kind of lady. I did get to meet her later in life and she still was keeping it together. Her later years were rough on her voice, but there was a sense that we’re in it for her. And if she hits the note -great! I remember seeing Peggy Lee later in life and she didn’t have much of a voice (then). She was very aware of ‘is that all there is?’ It became more poignant because of where she was: in a wheelchair. And she was still an incredible artist even if the instrument was frayed. So, to me, it might be a gay trope, but these tough ladies who were second-class citizens and yet triumphed in their own way remain inspirations for me.