I had heard good things about The Sample Room, but quite frankly, the reaction I got when I told my friends it was next on my list surprised me. Yes, the restaurant’s concept is almost too easy—a quirky combination of high- and low-brow cuisine, alongside a Lutheran’s version of tapas. And, yes, that’s just the kind of thing that makes a Minneapolitan feel right at home. However, my last few forays into epicurean territory have been…well, no small potatoes. So, when announcement of this column elicited howls of jealousy from otherwise mature adults, it made me all the more eager to go. 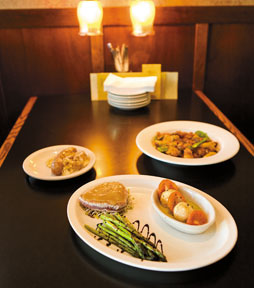 My dining partner and I sampled a few cocktails to start our evening—they are featured first, after all, in The Sample Room’s own tagline. I was treated to sips of my friend’s festive French 75 ($8.50), but I couldn’t resist ordering Sazerac ($8.50). Perhaps the world’s oldest cocktail, its recipe has changed little since the 1840s.

I found it an especially fitting choice, considering The Sample Room’s first incarnation. Built in the 1800s, it housed a tavern where one could sample kegs. This history—and not current market trend—is what actually inspired the restaurant’s small plate concept.

However, the establishment’s ’60s-style graphics and signage did not prepare me for its elegant Victorian interior, complete with fully restored tin ceiling and handsome wood paneling. Anywhere else, that inconsistency might be off-putting, but The Sample Room seems to work very hard at being unpredictable.

A brief scan over the menu makes me feel for the kitchen staff. It’s a from-scratch place, and the sheer variety of the small plate list is dizzying. The thought of the incredible amount of prep work is overwhelming. But I’m hungry, darn it, so after a few seconds, I quickly put everyone to work.

Baked Stickney Hill Goat Cheese ($6.50) arrived in a luscious bath of basil oil and oven-dried Roma tomatoes. After the cheese had—ahem—disappeared, restaurateur Darren Ennis caught me poking a finger directly into the oil, and made a good show of not judging me.

One probably needs at least three small plates per person at The Sample Room to make a meal of it. Though I know I always leave an “Off the Eaten Path” restaurant stuffed to the gills, I selfishly wanted more. If you have more than two people in your party, it may be wise to double-order on the most popular item.

Next was PreTenderloin ($6.50), a response to shrinking consumer budgets that grants diners the red-meat experience without a hefty price tag. The savings is partly because of the cut of meat—hence the name. It arrives perfectly medium rare, served with horseradish-mustard peppercorn sauce atop mashed potatoes. The result is right on target—a good way to satisfy a craving without the sticker shock.

It was nice to see Wisconsin “Sun Fish”—petite bluegill—on the menu. This dish is accompanied by butternut squash cake and tarragon aioli that easily can overpower the fish, so diners should alternate forkfuls to enjoy both properly.

If you’re going the way of the small plate, The Sample Room offers its equivalent in intoxicants: Liquor and wine flights are both approachable and affordable.

It defies wine theory, I know, but our full glass of Calesa Fair Trade Semillon ($7.50/30) goes with just about everything on the menu—even our hearty entrée, housemade Bratwursts ($15.95). Sautéed in bacon, deglazed in beer, and served with a cheerful helping of onions and sauerkraut, it is a smash hit.

At this point, no way could I could finish both brats, and the accompanying mashed potatoes and roasted vegetables. So, it became my take-home peace offering to those who could not be there in person.

Would that token appease their jealousy? Perhaps…if I didn’t tell them about dessert, the Toffee Caramel Vanilla Cheesecake ($5.50). It takes special chutzpah to serve me cheesecake, and I was up-front about this with the server. My mother is an admitted cheesecake zealot who judges them on her version of the four C’s: consistency, color, crust, and can-I-eat-the-whole-thing. I am similarly rigid—I like mine firm but creamy, and only lightly sweet. Nevertheless, the cheesecake boldly was fetched for me, and I was grateful, because it was all those things.

Parking is plentiful, even if your vehicle of choice is a boat. Just dock at the back, and come on in.