The Quest for Mushrooms

Somewhere in that mysterious web of human neurons—among our tangled memories, dusty bits of trivia, and all records of our petty existence—is a strange intersection. It mixes our greatest fears and our deepest desires into a kind of emotional pressure point, often loosely referred to as the sex/death nexus. Anyone who taps into this little trigger—an artist, a politician, even an illicit chemist—gains an enormous power to bewitch the masses, bringing us to either triumph or ruin. 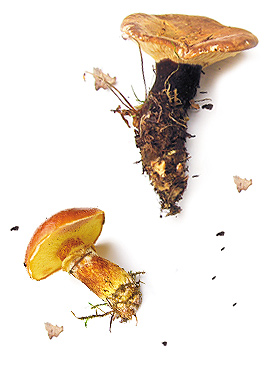 Among the visual arts, it’s all too easy to exploit our brain’s biggest weakness. Combine violence and sexuality on canvas or film, and it sells. It is in this way that nature truly smiles upon the culinary artist. She has created something that is the perfect embodiment of fear and desire, the mortal and the immortal. Better still, she has placed it out of easy reach. She saves it for the truly worthy who are willing to pay the price—either in physical labor or hard-earned currency—for it can be worth its weight in gold. It is the mushroom.

Our romance with the mushroom is perhaps as old as humanity itself. Romans adored mushrooms, naming a particularly beautiful species after Caesar himself. Empires in the Far East also paid homage to their native species, ascribing the reishi mushroom in particular with powers of immortality. Nutritionally, mushrooms once had been overlooked by Western science. One of few natural sources of Vitamin D, they contain a wealth of immunity-boosting vitamins and minerals that their drab color otherwise would not indicate.

Good chefs never have abandoned this gift of nature, but science finally is starting to give the humble fungus its due respect. No longer classified as a part of the plant kingdom, it now has earned its own distinction in Carl Linnaeus’s system of taxonomy.

Ron Spinosa, Past President of the Minnesota Mycological Society (MMS), says, “They don’t have chlorophyll, and they don’t need light, so it was realized that fungi really deserve their own kingdom.”

Almost anyone could identify a mushroom by appearance, but few actually could define it scientifically.

Spinosa explains, “The majority of the fungus is not visible—it’s underground, or it’s inside of a log, or something like that. The mushroom is actually a fruiting body. It’s a sexual organ, in that it produces spores. When you’re picking a mushroom, it’s like picking an apple off of a tree.”

However, this particular fruit is not one to be plucked casually and eaten by the curious innocent.

Not all toxic mushrooms may kill you, but they could cause such severe gastrointestinal stress that you might wish they did. The Internet is full of stories about accidental mushroom poisonings. Just a few years ago, four children in India died almost immediately after consuming a meal that contained toxic mushrooms. Their mother barely managed to survive, but suffered the effects of severe food poisoning.

Because of the toxicity of some mushrooms, perhaps it’s a wonder that poisonings don’t happen more often. Especially vulnerable are immigrant communities used to foraging for part of their nutritional needs. Mushrooms on a different continent may look identical to a type edible back home, but that doesn’t mean they are.

A safer way to enjoy wild mushrooms is to go hunting with a knowledgeable group of mushroom enthusiasts. Most states have amateur mycological groups (mycology is the study of fungi). Their membership often has knowledge about edible species equaling or surpassing that of professionals. Groups of amateur mycologists sprang up in the late 1800s and early 1900s all across the country, spawned by a worldwide naturalist craze.

Spinosa recounts, “There was this movement to go out and describe every living thing that was out there, and the people who did that were all amateurs. Beatrix Potter, the author of Peter Rabbit, was one of them, and she did drawings and paintings and watercolors that were very beautiful.”

MMS, the second-oldest in the country, was founded in 1898 by physician Mary S. Whetstone.

Perhaps not everyone would enjoy going out into the woods trying to find elusive species, but it has a definite appeal. Spinosa’s interest was piqued after reading Euell Gibbons’s 1962 book Stalking the Wild Asparagus.

Spinosa recalls, “I was interested in picking all these things people call weeds, and eating them, and some of them are pretty good. And I would come across mushrooms, and I knew some of them were edible. Probably the easiest mushroom to identify is the morel mushroom, and so I found those a couple of times. I was pretty confident that I knew what they were, and I ate them, and they were just fantastic!”

It was tough doing it on his own with just a field guide, so Spinosa became involved with MMS in 1985.

Many mushroom hunters, particularly in the Pacific Northwest, are in it for the money. But Spinosa endures mosquitoes, stinging nettles, and ticks for the sheer pleasure of being on a quest.

As Spinosa notes, “A lot of people just don’t pay attention. They just walk through the woods, and they don’t notice these things. There’s an unbelievable variety of shapes, forms, colors, and aromas, and there are all kinds of fascinating things, and some of them are good to eat. Different mushrooms have different flavors to them, and they’re delicious—better than the ones that you can find in the store. Finding something that’s rare that I’ve never found before—that’s really exciting. It’s kind of like Easter egg hunts or looking for gold.”

The commercial mushroom industry has not found a way yet to grow decent morels, so even the packaged ones in the grocery store were harvested wild.

The best hunting seasons are usually the spring and fall, especially a few days after a good rain. Minnesota, in particular, boasts a decent crop of porcinis and morels in either season, especially in Whitewater State Park. There, in a good year, hunters might return from a successful foray with pounds and pounds of mushrooms, which can be eaten fresh or dried in the sun.

Local enthusiasts often sell part of their haul at roadside stands for a deeply discounted price. Others may earn their keep through farmers markets and co-ops. But a dedicated few will form relationships with restaurants, selling their harvest directly to the head chef.

Spinosa generally eats what he finds, sautéing mushrooms in butter with wild leeks, or throwing them into pasta sauces. He points out that dried mushrooms, which may offer a more intense flavor when they are rehydrated, can last for years.

Many cookbooks on the market cater to foragers, but a wealth of free recipes can be found at sites like <www.theforagerpress.com>. Included there are instructions for making Salmon with Creamy Black Trumpet Leek Sauce, Fresh Morels in Caraway Sauce, and Hen of the Woods Salad, to name a few. All dishes listed celebrate the subtle and diverse flavors of harvested wild mushrooms that can be found throughout North America.

Should any of those recipes be sufficient temptation to begin your own quest for the elusive edible wild mushroom, Spinosa cautions: Never, never eat a wild mushroom unless you have identified it positively to the species level. To do otherwise would be tempting fate.

MMS’s fall forays are open to the public. Information about joining the organization, upcoming events, and mushroom identification is available at www.minnesotamushrooms.org.