The Queen of Mean Tells All

Lisa Lampanelli is an equal-opportunity destroyer. No group escapes her wrath. No one brutalizes straight men’s illusions about their sexuality so honestly. She loves to denigrate “fudgepackers” as well. But then, she levels everyone, including herself.

When I caught up with the Queen of Mean recently, I found she’d mellowed a bit—but then, she’s getting married. 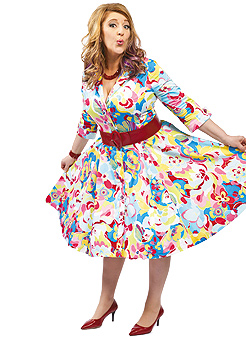 I apologize, Lisa, for having to reschedule our interview, but I was too busy down at the rest stop.

I figured you were having a rest-stop encounter.

It was just a nice conversation with a nice young man. That’s all.

Congrats on your wedding announcement. But you’re marrying a white guy?

So, I guess that counts. But that hot black body on the cover of your new book, Chocolate, Please: My Adventures in Food, Fat, and Freaks, is not what I’d call Italian. Does your fiancé like the book?

Well, he read the proofs. I actually gave him a little nice—what’s the word?—a little sort of stroking, as you faggots call it. And I met the love of my life, Jimmy. So, yes, he’s feeling secure right now.

In all seriousness, he’s hilarious. He’s what you faggots call a bear.

Do you have a lot of gay fans coming on to him?

Oh, my God! Half the time, he’ll have people coming up to him on the street or after shows, and saying, “We don’t want a picture with her. We want a picture with you.” So, suddenly, he’s the star. [With a hint of Joan Crawford in her voice] But it’s not going to last long, is it?

What do you think about Stephanie Miller coming out?

I don’t even know who that is.

The liberal comedy talk show host who has a national audience.

I just assumed every liberal talk show host is a dyke anyway. So, another one? Check her off.

Is Sandra Bernhard still pissed at you?

[Gasps] No! Guess what? It was a love fest. She was on Howard Stern about a month ago, and he said something like, “You and Lisa Lampanelli don’t like each other.” And she said she just didn’t know why we were in this argument, because “I really like her—she’s lovely and talented.” And she goes, “I just love the fact that I bump into her at these roasts, and I’m so out of my comfort zone.” And then, it’s, like, suddenly, we hate each other. I think she’s great. She extends an olive branch, so I, in turn, extended an olive branch. And I think we’re officially a couple.

Lisa, are you jumping on what you call the “tuna boat”?

Not yet. But if it doesn’t work out with Jimmy, I’m going to bump off Sandra’s girlfriend, and start doing her.

That does sound hot. Now, Lisa, it sounds like you’ve mellowed.

You know what’s funny? It’s, like, I’ve stopped fighting with people. It feels so good to, like, not be mad at somebody.

What about Dr. Laura going wacko with the N-word?

Oh, my God! She’s stealing my act. First, Michael Richards steals it. Then, Mel Gibson. Now, Laura. Who are you, you dirty Jew? Yes. Retire. Please. Nobody likes you.

Maybe conservative women can replace her with you as their icon.

No. I think they’d be, like, oh, no! She doesn’t fit in with our little sweater sets and pearls.

Speaking of conservatives, did you know I infiltrated a secret Catholic gay chastity group?

The media called it a therapy group—which it wasn’t—and I outed this closeted Lutheran pastor who was part of the whole Catholic deal. I was denounced by The New York Times. I hope I haven’t offended your Catholic roots.

Oh, God, no! I couldn’t care less. I just can’t believe that you did that. That’s ballsy!

Coming from you, that’s high praise. Hey. I have to get back to the rest stop. Anything else on sex, drugs, or rock ’n’ roll?

Rock ’n’ roll? Listen, bitch. I’m a fag hag. It’s show tunes only. I’m such a fag hag, I’m addicted to the Annie song “You’re Never Fully Dressed Without a Smile.” So, I make the audience listen before the show, just to punish all the people who aren’t gay.

Well, there are straight guys who like musicals. I bet your fiancé likes a good musical. He’s a New Yorker.

He does. He does. We went to see Rock of Ages, and he took my little nephew to see Wicked. They looked like some odd NAMBLA couple—really off-putting. They looked totally like an illegal couple. Poor Jimmy has to put up with a lot.