The Producers: Chan Walks on the Wild Side

“And you have our blessings, Roger, to make ‘Springtime for Hitler’ just as gay as anyone could possibly want. So, c’mon, do it for us, please.”

—Max in Mel Brooks’s The Producers 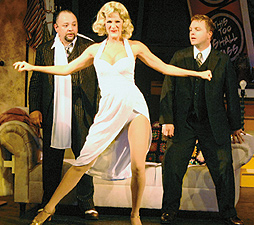 No show in Broadway history has won as many Tony Awards as The Producers, with a grand total of 12. So, it’s a truly exciting development when the nation’s top dinner theater company—Chanhassen Dinner Theatres—stages the area premiere of contemporary Broadway’s wackiest incarnation.

It’s also significant that The Producers is perhaps the most overtly gay piece ever to play the Chan. Though Mel Brooks’s unabashedly irreverent smash is not a gay script per se, it contains some deliriously zany gay characters zinging their way through a major plotline that culminates in the outrageous “Springtime for Hitler” sequence. We watch what happens when desperate musical theater producers pimp a campy gay take on history’s most horrific tyrant.

Director Michael Brindisi calls it “great satire. It pokes everybody. Everybody’s a target in the show. Directors big-time. Choreographers. Actors. Nuns. Blacks. Gays. He hits everybody. And what really makes the satire special is that he ultimately ridicules evil, and in so doing makes us laugh at things that we’re not supposed to be able to laugh at. He holds the mirror up, and says, ‘Look at yourself. This is how ridiculous you look.’ The great satirist will make us look at it, and make it better.”

However, not only is the musical’s satirical power so remarkable, but also the way it came into being. Brooks, who is not a composer at all in the traditional sense, actually sang the music into a tape recorder right from his own creative imagination. He also wrote the entire book and the lyrics. Tony never has seen anything like it.

The musical’s most famous slice of gay content is the delightfully campy tune “Keep It Gay,” with lyrics like: “I see German soldiers dancing through France/Played by chorus boys in very tight pants.”

Butch women are given a nod, too: “I see a line of beautiful girls/Dressed as storm troopers, each one a gem/With leather boots and whips on their hips/It’s risqué, dare I say, S&M!”

Mark King portrays Carmen Ghia, Roger’s “common law assistant,” who was a chorus boy in one of his shows until they started a romance, and King got plucked out of the hoofer herd.

King explains that Carmen “decided to give up his career in show business, and be supportive of Roger. So, that really gives the leeway to be overly dramatic. The part’s written that way anyway. The costume, the wig, everything I wear is so over the top. And all his dialogue is way over the top. So, it really allows you to go way out there!”

As for the Chan’s somewhat mainstream conservative audience, King shares, “You have to be careful about how far you can push it. There are potentially people who are going to be more offended by the gay aspect of it than the Hitler aspect of it. It’s going to be very interesting to watch the audience reaction during the first couple of weeks.”

That said, Brindisi sees The Producers as a sterling opportunity to appeal to new audiences. The festive nature of the piece is ideal for any group of people who just want to go out, and have a hell of a good time. Its gay themes are handled by a stellar theater company that has built its rep on great music, great comedy, and great food—clearly something to sing about!