Guthrie and Jungle Present Two of His Greatest Plays

Noel Coward (1899-1973) epitomized high British elegance and sophistication in the theater and life in general. As fluffy as his personality and his writing may have seemed to some, his pen was a sword that subtly sliced up hypocrisy, and questioned the morals around issues like adultery and privilege. 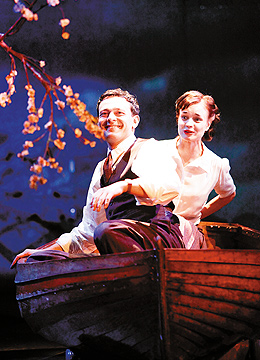 Two of the master gay playwright’s greatest, yet most uncharacteristic, works are now settling into long runs at two major Minneapolis theaters: Brief Encounter on the Guthrie’s McGuire Proscenium and Blithe Spirit at the Jungle. The Guthrie’s Dowling Studio also will premiere a short run of Michael Todaro’s new Producing House musical Coward’s Women, with Maud Hixson and Erin Schwab.

Brief Encounter is touring from London, having stopped stateside to raves in New York, San Francisco, and now Minneapolis. Produced by the Kneehigh troupe under the direction of Emma Rice, it emulates images inspired by David Lean’s exquisite 1945 film version, with influence from the original 1936 stage script titled Still Life. Seldom has a gay artist drawn so beautifully from his own marginalized gay position to empathize so richly with straight experience.

Rice says, “It’s about a very universal experience. I find it a really generous piece of work for Noel Coward to put those feelings to heterosexual people. They’re very well drawn for the heterosexual world. And actually, it’s about what’s possible and what’s not possible. I’m deeply moved by, and continue to be moved by, the delicacy with which that man traced the pain of falling in love with someone you’re not allowed to be in love with. It’s remarkably brave for a man like that to write. And also, his media persona in Britain was the cravat, the witty remark, the cigarette holder. And yet, this is incredibly tender and vulnerable. There are no cravats in this. It feels like he slowly unbuttons himself and reveals himself, and has to close up again. It’s remarkable.”

Indeed, Coward presages the 1960s Sexual Revolution by a quarter-century. When Brief Encounter was released as a film, which was a huge hit, it resonated with the unspoken brief encounter countless soldiers and their wives or gals at home secretly would have shared with others because of being separated from their primary love during wartime.

We also sense this sexual openness in Blithe Spirit, Coward’s loopy 1941 gem. Its tongue-in-cheek take on the occult appears all fun and games, but also entertains possibilities of mysticism and sexual freedom that would come to the forefront much later in the 1960s.

Jungle director Joel Sass points out, “Coward was a flamboyant, highly visible gay professional, but like any number of his plays, issues of sexuality in Blithe Spirit are veiled or heavily coded, because of the morality of his era. It certainly doesn’t diminish the enjoyment of the play. In fact, it’s highly entertaining to see how sex—supernatural or mortal—unhinges these characters, and brings buried passions and jealousies to the surface. Coward was always subversive in his writing. The character Elvira [Kate Eifrig], the ghostly first wife, could easily be a glamorous drag queen—beautiful, sexually free, bitchy, and sarcastic. The character of Charles [Michael Booth], having spent the entire play alternately pursuing or fleeing from the carnal affections of two wives, finally tosses aside his wedding ring, eagerly announcing that he’s ‘going to enjoy himself like he’s never enjoyed himself before,’ implying that this versatile 1940s swinger is now eager to sample items from a more diverse sexual menu.”

As for Coward’s style, Sass shares, “With just a few witty, wry, or bitchy words, he could make such a succinct comment on any situation. His characters are nearly always upper-crust, high-society types. They are like expensive bottles of champagne that have been given a good shaking. All is elegance and sophistication until they have their feathers ruffled, and they blow their corks in a plume of verbal fireworks and unregulated emotion.”

Erin Schwab, of Coward’s Women, echoes Sass: “I represent the more outgoing and social women Coward connected with in his life, which is very clear in some of his music. Let’s face it: He was great at parties, and I love parties and performing as well. At the same time, Coward’s ballads are warm, heartfelt, and have a deep sense of vulnerability.”

This range prompts Schwab to dub Coward “The Gemini of Music.”

Todaro adds, “I’ve learned that Coward surrounded himself with a wonderfully fascinating, as well as a truly diverse, group of women. Not only did these women support him as an artist and friend, but they also informed some of the truly amazing women he created for the stage.”

And the spirit of these women can be felt on three local stages.