The mojito, like any worthy cocktail, has a muddled history, garnished here and there with myth and ne’er-do-wells.

Some believe the mojito is relatively young, perhaps concocted by Cuban slaves in the late 1800s to coincide with the advent of Bacardi rum. 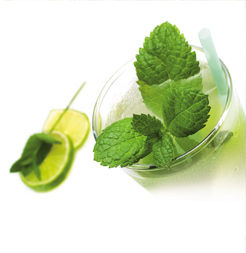 However, in an alternative version of the mojito’s birth, the details were lost to time and perhaps strong spirits. This account suggests it dates back to 1586, when the notorious pirate/explorer Francis Drake attempted to plunder Havana’s gold. Apparently, he didn’t fare well, but it nevertheless inspired a strong drink in his honor, known as El Draque, or “the dragon.” Instead of rum, the Draque drew its firepower from aguardiente—a stronger, more primitive version of the same. When that pirate rotgut was replaced with more refined Bacardi rum, the Draque became the mojito.

Whichever the story, the mojito was a favorite cocktail in Cuba by the 1920s; established itself across the bounding main in Florida in the 1930s and 1940s; and eventually became trendy in metropolitan areas across the United States.

The mojito has evolved into such a bar staple that mixologists now are now adding their own touches to personalize the classic recipe, which is: muddle 12 mint leaves with half a lime; add two tablespoons of simple syrup; fill a glass with ice; add rum; top with club soda; stir; and garnish with a lime wedge, plus a few sprigs of mint. Voila!—the classic mojito.

A few adjustments to this recipe still are considered fairly traditional. For example, if you don’t like so much sweetness, you can add angostura bitters, as do many establishments in Havana.

If you want to personalize it, you can experiment with muddling a few fresh berries in addition to the mint and lime, adding a dash of fruit juice, or even using a flavored (preferably clear) rum.

According to Olivier Azzopardi, Bar Manager at The Sofitel in Bloomington, a mojito is no longer a mojito without lime, mint, and rum. If you use those three, and maintain an overall balance, you may customize to your heart’s content. Moreover, if you can find more exotic fresh mint—with freshness being key—feel free to play.

Azzopardi cautions, “There is pineapple mint, but the taste is totally not the same, and you usually can’t find the same freshness.”

As well, Azzopardi suggests tinkering with the treatment of your mint: “If you want a very strong tasting mojito, chop the mint leaves at the very last minute, instead of crushing them.”

The Sofitel is capitalizing on the mojito trend this year with 10 versions of the classic drink—all only $6 each—including the classic, perhaps pirate-inspired version, plus variations with pomegranate, strawberry puree, crushed red pepper, or even vanilla ice cream. This last, the “Iced Mojito,” is dangerously smooth and wickedly refreshing.

The Sofitel is part of a French hotel chain, but Azzopardi notes that the mojito is actually very popular in the south of France, where average summer temperatures soar into the mid-80s.

As Azzopardi recalls, “When I was younger, having a mojito on the terrace in the south of France was the best way to get refreshed.”

Of course, it’s September, so “cool” and “refreshing” are going to sound a little less attractive than in the dog days of summer. But the mojito is flexible enough, and certainly tasty enough, to satisfy a thirsty pirate year-round.

Azzopardi points out that the mojito pairs well with most Caribbean-inspired or spicy food, such as coconut shrimp, fish, or even hot wings.

Given the cruel Minnesota winters, the classic mojito is a wonderful reminder that as the weather turns colder, somewhere, the sun still is shining. And if you aren’t buying that bit of claptrap, this cocktail also happens to be a wonderful excuse to drink rum.