The Intelligent Homosexual’s Guide Director Tells All: An Interview with Michael Greif

When the Guthrie hired Michael Greif to direct its commission of Tony Kushner’s The Intelligent Homosexual’s Guide to Capitalism and Socialism with a Key to the Scriptures, it was thrilling enough to know that Greif was the man who directed the original Rent and Grey Gardens on Broadway. 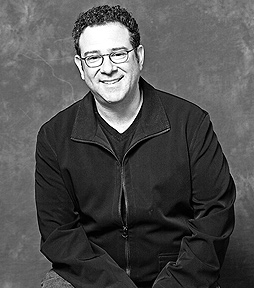 Just four days after this interview, Greif was nominated for the Tony again for Next to Normal, which nabbed a stunning 11 Tony nominations—including one for scenic designer Mark Wendland, who recently designed The Intelligent Homosexual’s Guide.

The Guthrie’s new Kushner commission actually started rehearsing in New York just as Next to Normal launched on what is shaping up to be another glorious Greif chapter in Broadway history.

I spoke with the Tony nominee at the Guthrie in early May—between his arduous and exuberant rehearsal schedule—about the new play, his own nontraditional family, and late Rent creator Jonathan Larson.

How long have you been in Minneapolis now?
About two weeks. We actually started rehearsing in New York, because Next to Normal was opening in New York around the same time that we were beginning rehearsal here. I was able to do some double duty.

You’re known for doing many projects simultaneously and successfully. How do you do that, and turn out such great product so consistently?
I think it’s great material. Ever since Rent, I’ve been very fortunate about being able to pick and choose, so a lot of great material has passed my way, and it’s been very inspirational, and when the material’s great, it’s very energizing. Companies are great. Material’s great. Writers are great.

You’ve worked on the development of Tony Kushner’s plays before.
I worked on A Bright Room Called Day, not the development of it. It was fully written when I encountered it. That was way back in 1990. In fact, I met Tony in the late ’80s. I was given the opportunity by [Founding Producer-Director] Joe Papp at the Public Theater to produce three plays for the season. It was quite an extraordinary opportunity for a young director.

And one of the plays I did was Machinal that was a revival of a play I did before, which got Joe Papp’s attention. But the very first project I brought to Joe was A Bright Room Called Day. And that’s how Tony met Joe and Gail [Merrifield], his wife. He was very happy about that.

[Note: Other plays directed by Greif at the Public in that time period were Casanova and Pericles.]

I suppose when you have worked on a playwright’s work in the past, you deepen your understanding of him or her, and develop an instinct and intuition about his or her work, even if it’s a brand new play.
Oh, absolutely. You live in their world, and you live in their imagination.

I’ve also been incredibly fortunate to work on a number of John Guare’s plays, who is an extraordinary playwright. I worked on Landscape of the Body many times. It was a play I always loved. It was a play I first did in graduate school. And then, I was able to do two productions of it, plus another play of John’s.

There really is nothing like it. Well, it’s trust. Trust is enormously important, but also just getting to dwell in their imaginations and their passions. It is quite extraordinary, and you are able to bring that experience and that confidence into a newer or later work.

So, I feel like my long friendship with Tony and our working together is certainly influencing and fostering and making this an absolute joy.

Something remarkable in your place in and contribution to American theater is that your work has been extremely popular, highly acclaimed, and greatly honored. And there’s a vivid consciousness about sexual orientation and cultural marginalization reflected in your productions at a time when those things are finally being accepted by mainstream society. You have a sensibility uncannily attuned to this shift in social consciousness. How did that come about?
Well, you’re right to attribute the time [laughs], so I feel very fortunate.

But there are lots of fine directors around, yet you’ve risen to be a pivotal figure.
It’s about the stories that you’re drawn to. I’m drawn to stories that tend to involve themselves with struggles of identity, or struggles of less-empowered groups of people.

I certainly grew up confused and a little estranged, not quite knowing what my place was. I grew up in a working-class environment in a tough part of Brooklyn at a tough moment in the late ’60s and early ’70s—but also a very exciting moment of change and revolution. I was very fortunate to have a political older sister who opened up the world for me in many ways.

So, those were the stories I was always drawn to, and those stories and those associations continue.

Does your Brooklyn upbringing relate to The Intelligent Homosexual’s Guide?
[Laughs] Well, it might have influenced Tony’s decision to ask me to do it. But there really is something spectacular about this.

Gus is suicidal. What’s going on with that?
The play is about this 75-year-old retired longshoreman who feels very disconnected from his family, and very disconnected from his belief system. He’s lost. He fears Alzheimer’s, and he also recognizes a disconnectedness from all the things that were most important to him. He was active in the labor movement. He was a member of the Communist Party. He fought and had great victories as a labor leader, and he’s looking at a world now where those victories seem meaningless to him.

He’s unmoored. He is emblematic of a lot of the characters in the play who feel lost or disconnected, or unable to establish the kind of relationship that they should be establishing for health and happiness. His children similarly feel disconnected from their lovers, their partners, each other. It’s a world where everyone feels that terrible dislocation. They don’t recognize their purpose in life.

And his children are gay.
He has three kids: a gay son played by Stephen Spinella; a straight son played by Ron Menzel; and a gay daughter played by Linda Emond. He has a very complicated and wonderful sister—played by Kathy Chalfant—who has been a politically active gal her whole long life. We just got material in which she reveals much of her sexual history [laughs] as well.

How interesting!
Enormously interesting. It’s sort of a narco-Communist-Freudian hotbed.

Even some conservatives might actually be drawn to this production, because of the issues Gus is faced with. It sounds universal, even though he’s a Communist.
Absolutely.

That’s Kushner.
I couldn’t agree more. Tony takes us to the most extraordinary intellectual and theatrical places, but he also funds them in the most extraordinary human drama. The dramatic stories are always the underpinnings of any flight that he takes. Those relationships are very universal. Human yearnings are very, very, very much at the core of the play—and that yearning to belong, that yearning to be able to love and be loved.

In its own way, you could call this a nontraditional family, and I hear that you yourself have a nontraditional family.
I do. I have a wonderful nontraditional family. I have a partner—it’s been 26 years—as does one of the [laughs] characters in the play. And my partner and I are the partner and godfather of two fantastic kids that we have with a lesbian couple. One of the women is someone I went to high school with. The four of us shared apartments in the mid-’80s. We were great friends, and the women first decided they wanted to have kids, and after a ridiculously long time of consideration, we decided to have kids, too. So, I have a 14-year-old son and a 10-year-old daughter, who live with their two moms. And Jonathan, my partner, and I tend to be like weekend dads.

Oh, really?
This is not a show for kids. This is a very adult play.

The Intelligent Homosexual is set in 2007. Is the economic collapse that started at the end of the Bush Administration reflected in it?
The approach. Yes. The imminence. If you go back to 2007, what was beginning to happen in the housing market, for instance.

I’ve seen Rent four times onstage. And I love the film.
Have you seen the film version of the last show?

No, I haven’t.
It’s very good. I hope you’ll look at that. I’m pushing that a little, because I think it’s beautifully, beautifully shot—and makes the stage production seem very exciting.

At the Orpheum here in Minneapolis this past March, I saw the national tour again, and the crowd was just ecstatic, verging on hysteria. I loved it.
They’ve had that response around the country since January. It’s really been something.

I think Rent is prophetic. It reveals the roots of the current economic collapse from the Reaganomics era—and the impending strangulation of socioeconomic opportunity. And Grey Gardens hits a similar nerve, because it depicts a family’s stark economic breakdown. So much of your work has an understanding of economic turmoil.
I’m interested in outsider stories, and that’s where I tend to come from. I’m particularly interested in the human fallout of those economic situations. Those are the things I tend to be drawn to.

Did you work much with Jonathan Larson?
Yes. We worked closely for two-and-a-half years. He was extraordinarily exuberant, enthusiastic, and passionate. He worked very hard to earn some recognition and respect. And among the enormous tragedies and ironies of this is, just as he was about to get the respect of the world, he wasn’t around to receive and enjoy it.

But his legacy is truly about working very hard, and sticking with it, and persevering under a lot of adversity, and holding onto the things that matter to you—believing in yourself, but mostly doing the hard work. I mean, Jonathan worked every day, and worked every day long before Rent: writing; rewriting; reshaping. Extraordinary perseverance, I think, is the legacy.

How did you feel when all the accolades came? The Pulitzer. The Tony.
That’s what I mean about the tremendous irony and tragedy. It was a double-edged sword. We were joyful, and we were mournful. It was heartbreaking—truly, truly heartbreaking. And one was never present without the other. It was a very enriching, humanizing, educating, heart-expanding time.

The Intelligent Homosexual’s Guide to Capitalism and Socialism with a Key to the Scriptures
Through June 28
Guthrie Theater
818 S. 2nd St., Mpls.
(612) 377-2224
www.CelebrateKushner.com