Jerry Hughes strikes a first impression of enthusiasm, vigor, and well-being. It would be easy to think he is on top of the world, and, by all accounts, he probably would agree with you. But his contagious smile and the animated way he relates the story of his namesake Hughes Foundation belie the desolation he endured on his journey to get where he is today. You see, arriving where he is took more than an inspired idea and a little moxie. It took rising above the depths of real despair, looking at the face of death, and deciding to do…to be different. 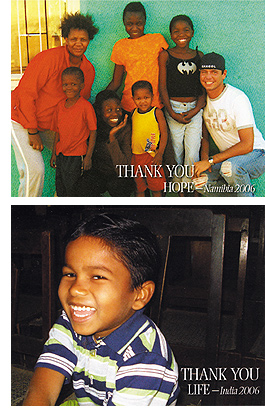 The child of an unwed teenage mother, Hughes grew up in a rural Iowa home where he regularly ran the obstacle course of abuse, alcoholism, and poverty. As he matured, he lost himself to self-destructive choices that put him more than $100,000 in credit card debt, unemployed, and turning tricks on the streets to survive. Ultimately, he landed in bankruptcy court, and became suicidal.

A job lead in Amsterdam with the Billy Graham Association offered a ray of hope and a different career path. Hughes moved back to the United States when his work in Amsterdam ended, eventually returning to Minneapolis after working in Chicago for a time. He had changed his life for the better, but his past caught up with him on a routine trip to the doctor’s office for an inoculation before embarking on another overseas trip. Part of his preparations that day included a rapid HIV test.

With the words “I’m so sorry, Jerry. You have HIV,” Hughes’s life was changed forever. After recovering from the shock and numbing devastation of the diagnosis, his thoughts focused, and he resolved, “I am not going to let this win.”

As planned, Hughes got on the plane bound for India to work at a youth camp. During one of his presentations, he mustered up his courage, and against the advice of the camp staff, shared with the youth that he was HIV-positive. He volunteered, “If my story has inspired you in any way, come forward.” He was shocked when all but a handful of children surrounded him. He would be asked to share his story with other groups and schools of many faiths while there.

Hughes had lost himself so many years before, but in facing a life-threatening disease, he found himself and his purpose. He had a compelling story, and it needed to be told. The Hughes Foundation was born.

The goal of the Hughes Foundation is simply HIV prevention through education, but its power is its message of hope. It pushes people out of their comfort zones, crossing boundaries of race, religion, and ethnic group—its reach extending from the Twin Cities metro area to India and Namibia.

Because young people ages 15 to 24 make up the most new HIV infections worldwide, the foundation holds youth camps. It partners with schools, orphanages, and organizations such as the YMCA to gear its programs to this age group.

More than just the facts, Hughes’s message tugs on heartstrings. It disarms critics, and opens dialogue, as he makes himself vulnerable in front of crowds with his story.

Hughes says, “Sometimes, I find people are more concerned with knowing how someone got HIV than they are about loving them.”

It’s this aspect that also allows Hughes inroads into communities of faith, steering their views of HIV and AIDS away from apathy, indifference, and even judgment, and toward comfort, love, and hope.

“My mission is to get the churches engaged,” Hughes states.

Because of his past, Hughes speaks their language, and they listen.

As part of the 20th-anniversary World AIDS Day on December 1, the Hughes Foundation will be launching a volunteer program at a hospital in Namibia, and bringing its message of prevention to some 10,000 people of all religious backgrounds.

Originally organized by the Joint United Nations Programme on HIV/AIDS (UNAIDS), World AIDS Day is about raising money and awareness, fighting prejudice, and improving education around the pandemic. According to UNAIDS estimates, some 33.2 million people around the world are living with HIV, including 2.5 million children. AIDS is clearly not over.

Perhaps the most significant thing that Hughes has done is to put a face to HIV—his own—and reach out to those afflicted with the disease in places where others still are afraid to go.

The Hughes Foundation depends on the support of individual donors and sponsors to continue its message of prevention and hope.