BeBe Zahara Benet doesn’t have to lip-synch for her life anymore. She’s the winner of RuPaul’s Drag Race, Season One. She hails from West Africa’s Republic of Cameroon—“Camerrrooooooooon,” as RuPaul frequently bellowed during Benet’s runway struts. She currently is based in Minneapolis at the Gay 90’s La Femme Show Lounge. 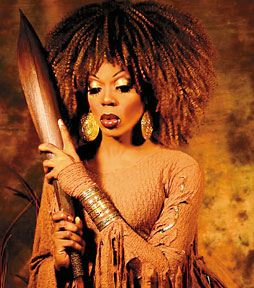 I spoke to Benet (aka Nea Marshall Kudi) by phone just before the climactic episode was aired to dish about the show; those other bitches…er, contestants; and what’s next for America’s next Top Drag Queen.

Congrats! Now that you’ve had five seconds to think about it, what’s next for you?

There are so many things I want to do. One of my priorities is to create a show for BeBe to share her own experiences and where she comes from with a lot of people. That’s where my mind is right now. And I’m hoping other opportunities come along.

Did they shoot the show through a layer of gauze? What’s with the soft-filter effect? It looked like a Liz Taylor perfume commercial.

[Laughs] I didn’t get it at all. I wish I could answer that question for you. I think you need to ask the producers, “What were you thinking? Were you trying to hide our faces, or something? Do you think we’re not attractive enough? Right?”

What was the show’s most ridiculous challenge?

I don’t know if I’m going to say “ridiculous,” but I think it was the [Absolut Drag Ball challenge]. I had to work with raspberries. It’s a beautiful fruit, but so delicate to work with. That was a challenge for me, but when you get in a situation, you do what you have to do to pull through. And it worked.

Was there any on-set drama or sassing we didn’t get to see?

Well, I think a lot of what you saw on the show is how it went. I really appreciated that. Coming in, I was skeptical, and wanted to make sure drag was represented the way it should be. This is what I do for a living. I want to take it to the highest height. So, I wanted drag portrayed with no stereotypes. Everybody came with a professional attitude, and respected the art. Obviously, personalities rubbed here and there, but generally, it was how we were.

Who got booted too early in your opinion?

Jade. I think she was just coming into her own element. I feel there was more of her we could have seen if she stayed longer, but then again, we’re in the hands of judges who have their own opinions, and we don’t control that.

Who needed to get booted sooner?

Everybody. [Laughs] Is it OK for me to say that?

Whom did you become closest friends with?

I got along with every single girl, but the one I bonded the most with was Nina Flowers. There were a lot of similarities between us—where we come from; how our cultures are, and how they look at men; and how we look at drag, and how far we want to take it.

What sorts of secrets can you spill about your fellow contestants? Now’s your chance for revenge!

Honestly, I got along with everyone. I have no hard feelings with anybody. Not even Akashia. You’d be surprised. I talk to her all the time.

No, but I’m planning it. I told her they need to be grilled. I love that whole barbecue smell.

Of course, everyone was surprised and moved when Ongina came out as HIV-positive during the show. Can you discuss your own reaction when it happened?

It was very—oh, my God—very emotional for me, because a lot of people where I come from go through that same experience. Here in America you can go to the hospital, and be diagnosed, you can go through treatment, and stay healthy and live life. In some other countries, it’s another thing. Some people don’t even know [they’re HIV-positive], or have opportunities to find out. It brought so much emotion. But I’m happy she’s OK, and getting treatment, and taking care of herself.

Are there any drag queens in Cameroon?

It’s unheard of. I don’t know of anyone but myself. I was hoping this would be a real awakening, [so they could] see there are people out there like us who think outside the norm, and encourage anyone who wants to think differently. I want to do something for Cameroon. It took my [going] all the way to the United States to explore who I am. It’s a chain reaction. So, I need to go back to where I came from, and create opportunities for other people.

How is the drag scene back in Minneapolis—tired queens, or fierce talent waiting to be discovered?

There is talent everywhere that needs to be discovered. I mean, you didn’t know who I was until now. Correct? So, just find them, because they are there.

Did you get to hang out in LA and experience its scene a bit while making the show?

No, they had us in prison. We were in chains, and when we were released, they said, “Go back to where you came from. We are not leaving you here.” [Laughs] They said, “You will be in so much trouble.” So, I am hoping I can find the time to [visit, and] enjoy everything.

Any final words on being the first winner of this title?

I’m just hoping I can be a good role model, and represent what drag is all about and can be, and inspire other people who have the passion for the craft.