The Failure of Sex Education

HIV and STI Rates on the Rise Part 2

Though the terms are interchangeable for many people, STI actually refers to the germ—virus, bacteria, or parasite—that can cause disease or sickness. Thus, “STI” is a much broader term than “STD.”

An STD only refers to infections that produce symptoms. As many STIs do not cause symptoms in many of the people who are infected with them, “STI” is becoming the more commonly used definition.

Although most STIs are treatable with either penicillin or antibiotics, many people do not worry about them—or practice safe sex—but they still pose great risks to sexually active people.

Chlamydia is the most frequently reported bacterial STI. In 2006, the Centers for Disease Control (CDC) noted more than one million cases, and estimated that more than two million people between the ages of 14 and 49 were infected.

Most people with Chlamydia are unaware that they have it, or they are treated for the symptoms, and not the infection itself. It is considered one of the many “silent” infections, because 75 percent of women and 50 percent of men exhibit no symptoms at all.

Symptoms differ between men and women. They generally begin one to three weeks after infection occurs. They can be found in the throat as a result of oral sex.

Women generally experience more severe symptoms than men. Abnormal vaginal discharge and a burning sensation during urination are the most common.

If left untreated, Chlamydia will spread to the fallopian tubes. It will produce either no symptoms, or lower abdominal pain, lower back pain, nausea, fever, pain during sex, and bleeding between menstrual cycles.

Men generally feel painful urination, and have a discharge from the penis.

For persons who leave Chlamydia untreated, serious reproductive and other long-term health problems can ensue. Men rarely will show signs, but can become sterile if the infection is left untreated. Women have a 40 percent chance of developing pelvic inflammatory disease (PID). They are up to five times more likely to be infected with HIV.

A simple lab test can confirm Chlamydia. Antibiotics can cure it.

Caused by a bacterium, Gonorrhea grows and multiplies easily in warm, moist areas of the reproductive tract, including the urethra of both men and women. It also can grow in the mouth, throat, eyes, and anus. It is most prevalent in teenagers, young adults, and African-Americans. It is common for someone to have Gonorrhea and Chlamydia at the same time.

Like Chlamydia, Gonorrhea is known as a “silent” infection, with more than 700,000 people infected each year, but only half the cases ever getting reported. As with HIV, Gonorrhea has been increasing in numbers.

Gonorrhea easily is transmitted by contact with the penis, vagina, mouth, or anus. Ejaculation does not have to occur for transmission to happen.

Symptoms of Gonorrhea are similar to Chlamydia. Men and women may notice them two to five days after infection, if at all. It may take as long as 30 days for someone to recognize them.

Men may feel a burning sensation while urinating, along with white, yellow, or green discharge from the penis. Painful or swollen testicles are common as well.

Women often have more mild symptoms that are so nonspecific, they may be mistaken for a bladder or vaginal infection, with pain or burning sensation during urination.

If left untreated, both men and women can experience long-term problems, such as PID in women and infertility in men. If it spreads to the blood or joints, the infection can become life-threatening. A simple lab test and antibiotics can cure Gonorrhea.

Individuals who are HIV-positive are twice as likely to have HIV in their genital secretions than people who do not have Gonorrhea. The median concentration of HIV in semen can increase as much as 10 times, skyrocketing the chance of infection in a HIV-negative person.

Caused by the Herpes Simplex Virus (HSV), Genital Herpes has two forms: Type 1 and Type 2. HSV-2, the most common form, is transmitted through sexual activity. HSV-1 (often known as cold sores), which can be found on the mouth and lips, can lead to genital herpes by oral-genital contact.

Very widespread in the United States, HSV-2 is detected in one of six people ages 14 to 49. Though they have not decreased, rates have remained stable. It is more common in women, with one in five having it, compared to one in nine men.

Though it has no cure, Genital Herpes can be treated with medication to decrease the number of outbreaks yearly. Transmission, mainly during sexual contact, can occur without any visible outbreaks.

Many people may not be aware of infection. They may have mild symptoms that may be mistaken for insect bites or other skin conditions. Symptoms, which typically appear in the first two weeks after transmission, may include sores in or around the genital area, plus flu-like fever and swollen glands.

A person may experience four or five outbreaks the first year, but they decrease over the years. In people who have suppressed immune systems, such as persons with HIV, severe complications can ensue.

As with STIs, condom use and antiviral medications can reduce the risk involved, but with Genital Herpes, an infected person should refrain from sexual activities during an outbreak to reduce the risk of transmitting the disease to a sexual partner(s).

Syphilis can be one of the many “silent” STIs. People may not have symptoms for years, yet are capable of transmission the entire time. Syphilis, unlike many other STIs, has multiple stages.

The first—and primary—stage is signaled by a single sore known as a chancre. Usually firm, round, small, and painless, it will grow where Syphilis entered the body. Multiple chancres may develop. Though condom use can reduce risk, if the chancre is exposed during sex, transmission of Syphilis can occur.

From the time of infection until the chancre appears, 21 days usually elapse, but it can be anywhere from 10 to 90 days.

When left untreated, Syphilis will progress to the secondary stage, which has multiple signs and symptoms. A skin rash that does not itch usually will appear on multiple areas of the body. Rough, red or reddish-brown spots will show up on the palms of the hands or the bottoms of the feet.

Signs may be evident on other parts of the body. They may not be noticed, because they may resemble rashes from other diseases, or may be faint. Fever, swollen lymph glands, sore throat, patchy hair loss, headache, weight loss, muscle ache, and fatigue also can occur.

If still left untreated, the latent stage, hidden and most damaging of all, will ensue, lasting for years. It may commence up to 20 years after the initial infection. About 15 percent of people infected with Syphilis reach this stage.

Once Syphilis is allowed to progress this far, damage to the internal organs, brain, nerves, eyes, heart, blood vessels, liver, bones, and joints is common. Paralysis, numbness, blindness, and dementia can emerge. It may lead to death of the infected person, of if a woman is pregnant, death of an unborn fetus.

If caught within the first year, an injection of penicillin easily can cure Syphilis. Additional does will be needed for those who have had it longer. But penicillin will not cure any long-term damage that has been done to the body.

Though many STIs can be cured by a quick visit to the doctor, the belief that a pill can solve everything has left many lulled into thinking that practicing safe sex at all times is unnecessary. Why waste time trying to put on a condom when it just is going to take you out of the mood, and make the experience less enjoyable?

Condoms are 99.9 percent effective in preventing the spread of HIV and STIs.

The long-term financial and psychological effects of infections like Genital Herpes and HIV have left many rethinking those decisions that could have saved them thousands of dollars a month, as well as difficult conversations with potential sexual partners. Even Syphilis can turn deadly when left untreated.

Such beliefs, topped with the economics of prevention and education, have helped fuel the increase in infections of not only HIV, but also many other STIs.

Tim Marburger, Director of Fundraising and Special Events at The Aliveness Project, can’t stress his concerns enough: “Government grants have been completely cut and/or reduced. Some sites don’t even have condoms to distribute. Every agency working with HIV/AIDS should have access to condoms, and not have to scramble to find them, or take moneys from other pots to fill in the lost dollars.”

Be smart: Protect yourself and your sexual partners from HIV and STIs by using condoms and practicing safe-sex practices at all times.

With information readily available at www.cdc.gov/std, educate yourself on the risks of practicing safe sex, or talk to your local physician if you have more questions concerning HIV or STIs. 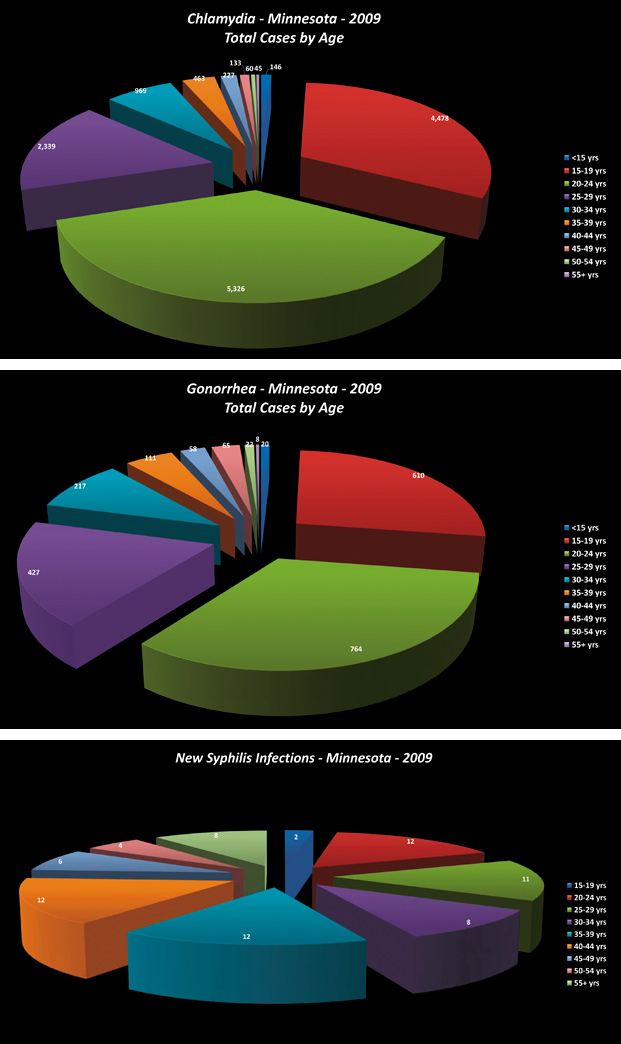