The Current State of Intersex

Dr. Sharon Preves, Associate Professor and Chair of Hamline University’s Sociology Department, ranks as one of the world’s foremost experts on intersex issues. Her groundbreaking book Intersex and Identity is the gold standard for understanding one of the most misunderstood and demonized topics around.

Intersex, in brief, refers to individuals with atypical sexual anatomy. Such people do not and cannot fit into the standard categories of gender codification. Some intersex people may identify as transgender, but transgender people are not necessarily intersex. 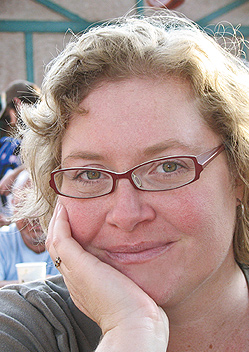 Moreover, discussion of intersex shifts the whole paradigm of how we look at sexuality and legal rights for sexual minorities. Whereas the uninformed will cling to the misconception that sexual orientation can be chosen, they cannot take refuge in that myth when it comes to intersex, as anatomical differences are not chosen.

When I recently spoke with Dr. Preves, I caught up myself on some current intersex concerns.

Though I’ve noticed some improvement in the GLBT community and allies regarding intersex since I last interviewed you in 2006, I find that even on liberal talk radio, the term “hermaphrodite” is still jeeringly tossed about. The Caster Semenya controversy at last year’s Berlin Track and Field World Championships brought out snark on all sides. I wonder sometimes if straight liberals are comfortable with clear-cut issues around rights, but when it comes to more complex inquiries into the nature of sexuality, they can sometimes be as unaware as conservatives supposedly are.

You hit on a key point. We have learned to be more tolerant or accepting of various expressions of sexuality. Think of how ostracized bisexuals were just 20 years ago as an example of how much progress has been made on this front.

Familiarity and visibility breed comfort. When it comes to expectations about biological sex, the expectation is still rigidly binary: that there are two and only two sexes, female and male, despite the regularity with which variations of sex development occur—one or two in two thousand births, the same frequency as cystic fibrosis and Down’s syndrome.

Take Caster Semenya’s case as an example. When the 18-year-old South African runner won the 800 meter race at the World Championships in Berlin in August 2009, finishing nearly two-and-a-half seconds before her closest competition, her record-breaking win was overshadowed by rumors that the International Association of Athletics Federation [IAAF] had required her to undergo sex verification testing before the race.

Semenya’s eligibility to compete against women was challenged just six months before US figure skater Johnny Weir’s flamboyant behavior both on and off the ice at the 2010 Winter Olympics in Vancouver had two Canadian broadcasters suggesting that he should be subjected to sex-verification testing—something that has never been required of male athletes.

Indeed, in an attempt to level the playing field, the International Olympic Committee [IOC] has used various means of weeding out “sex imposters” among female athletes since 1966 to disqualify genetic males from competing as women. After nearly a decade of protest from athletes, the IOC suspended mandatory sex verification of female athletes for the 2000 Olympic Games on a provisional basis.

As of this interview, Semenya’s future as a competitive runner remains uncertain. The IAAF has yet to rule on whether they consider her “female enough” to continue the tremendously promising career that she only just began.

That decision could be issued soon, as members of the IAAF and the IOC met in January 2010 with medical experts in “disorders of sex development” [DSDs] at a two-day private gender symposium to discuss recommendations for female athletes whose sex may be deemed questionable by medical standards—e.g., genitalia, chromosomes, hormones, and/or gonads that are not female-typical or congruent with one another.

The IOC left this meeting with a recommendation to further medicalize variations of sex development by establishing world-renowned centers for excellence in the diagnosis and treatment of disorders of sex development, and requiring female athletes whose sex may be in question to seek hormonal, surgical, and/or psychological treatment from one of these medical facilities in order to be eligible to compete.

Intersex advocates are keenly aware of what they call the “medicalization of intersex.” How might that play out with the current health-insurance overhaul? And of course, that overhaul is pretty complicated and open to all kinds of interpretation involving just the general populace, much less the far smaller intersex population.

Where does medicalization cross over into the pornographic?

This is a fascinating question. When I was first doing research on intersex in the early 1990s, I had difficulty finding relevant social science or autobiographical literature on this topic.

I hit the proverbial jackpot when I came across a plethora of medical journals documenting intersex variations. Many of these articles contained photographs of nude children, often with close-ups of their genitalia. I was so uncomfortable looking at these images, and found it shocking that they were a part of medical research. Sure, the desire to document variation is understandable, but these photographs struck me as some odd combination of child pornography and mug shot.

Oddly, at the same time I was unearthing this “treasure trove” of medical photos, I began doing early Internet searches in the now-defunct search engine Ask Jeeves—recall that this is the time the Internet first became widely available. Unlike today’s fruitful Google searches for “intersex,” “hermaphrodite,” or “disorders of sex development,” those early Ask Jeeves searches returned nothing but links to pornographic material, largely featuring trans women who had both breasts and a penis.

Early intersex activism featured some members of support groups engaging in a genital show-and-tell with one another to normalize the anatomy that had been medicalized, and resulted in experiences of isolation and shame.

For more general information:
www.isna.org and www.accordalliance.org
For reference guidebooks created for parents and clinicians: www.dsdguidelines.org
For information about Androgen Insensitivity Syndrome: www.aissg.org
For peer support and an online chat forum: www.bodieslikeours.org/forums
For a contemporary intersex activist/advocacy organization: www.intersexinitiative.org