The CRUX of Gay Climbing

For many gay people, the process of discovering one’s sexuality, then coming out to family, friends, and colleagues, is like climbing an enormous wall. A route to the top exists, but getting there requires plenty of planning. The path takes many twists and turns, with occasional slips. 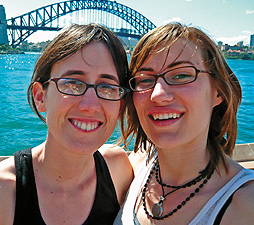 The metaphor is particularly apt for Meghan McDonald. The 25-year-old started rock climbing a dozen years ago, at a gym in her hometown of Nashville, Tennessee. The first time she scaled a vertical wall, she was hooked.

“It’s an amazing feeling—so empowering and simple,” McDonald says. “You start at the bottom, and reach the top. It’s such a challenge, but at the end, it’s so rewarding.”

In climbing, McDonald notes, “you never know what to expect, or what you’ll get into. It’s a really dynamic environment. It’s the same as being a GLBT person—before you come out, you don’t know what people will think. Our lives are a challenge, just like climbing is.”

Like being gay, rock climbing is not always what it seems.

“Strength is not the number-one factor,” McDonald states. “It’s more important to be flexible, and have good balance.”

“When you’re standing at the bottom of a wall or a mountain, you have to look up, and analyze the most efficient route. You can muscle your way up if you want, but that’s not the best way,” McDonald adds.

Two years after her first ascent, McDonald began working at a local climbing gym. She went on to Fordham University in New York, and played soccer there. But whenever her coach allowed her to, she climbed.

Not long ago, McDonald and her partner, Danielle Jablonski, spent nearly three months on the road. They visited 24 states, and climbed in all of them.

Right now, the focus of the couple’s lives is CRUX, a gay climbing club founded by the two women. (“Crux” is a climbing term referring to the toughest part of a route.)

CRUX boasts a core group of 20 to 25 members. They travel all over the United States, climbing and competing. Their home gym is the Rock Club in New Rochelle, New York, while the closest outdoor spot is the Shawangunk Mountains in Ulster County.

Why a gay climbing club?

“GLBT climbers are out there, but they’re not visible,” McDonald reports. “We think that whatever you do, it’s important to surround yourselves with like-minded people.”

McDonald draws a parallel with a women’s climbing group: “There’s a similar feeling of acceptance, a welcoming environment. Starting a new sport can be really intimidating. You’re not sure what to expect. It’s good to have a community you can rely on.”

CRUX accepts everyone, from newcomers to experts. Straight people are welcome, too. For many gays and lesbians who never have tested themselves physically, the club can be a life-changing experience.

“We just had an event where a guy had never climbed before in his life,” McDonald recounts. “He had never been an athlete, and he’d never hung out with gay people. He was nervous all day, but he took the plunge. Everyone really welcomed him in, and he made it to the top. He felt so good, and was so thankful. He e-mailed everyone afterward, and said he couldn’t wait to hang out with us again.”

Competitions take place in indoor gyms, under the sponsorship of the national organization USA Climbing. Competitive climbing follows a predetermined route, and climbers can use only a limited number of holds. Climbers who fall are disqualified. Both the Gay Games and Outgames have featured competitive climbing. CRUX looks forward to entering teams in future competitions.

But competition is only one aspect of climbing.

“Danielle and I love the sport, because it’s accessible, fun, very social, and a great workout,” McDonald enthuses. “It’s like biking. Anyone can do it, at any level.”

CRUX’s major challenge now is to increase membership. The club is contacting gay sports groups, including the New York umbrella organization Out of Bounds. CRUX is posting information on Facebook and other Web sites. And it relies on word of mouth.

“People who are looking for gay activities just find us,” McDonald relates.

McDonald’s goal is to create a core of GLBT people who climb, meet new people, socialize, train, get in shape, and compete together.

In McDonald’s words, the club is “a great opportunity to make LGBT climbers more visible in the climbing community and beyond. And it’s a way to use climbing as a tool to empower LGBT people.”

Once you’ve climbed a wall, the rest of life is easy. And that’s true whether the wall is physically imposing, like a climbing gym or a mountain, or if it exists only in your mind.