After I visited The Blue Door Pub, I immediately began to dish about it to friends and family. Restaurant gossip is both exciting and benign—for a vice—so I do enjoy recommending a great new place. After tasting a number of the wonderfully exotic and enormously satisfying burgers, I was excited to spread the news. But every time I broached the subject, “Oh we already know!” inevitably was the answer. I suppose one could consider it validating, if a bit of a premature denouement. 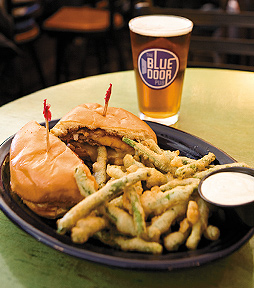 For those of you who already know about The Blue Door, this will be old hat, but for the uninitiated, allow me to give you a tour. Your first impression could be waiting for a table, especially if you’ve arrived during the rush. It’s a cozy little place in Merriam Park in St. Paul that tends to fill up in the evenings. But because you now know about the place, you’ve arrived a little early, and happily are perusing the eclectic beer menu at your leisure.

This isn’t your typical beer menu. Generous happy hour specials (2:30-5:30 PM, 10 PM-close) make experimentation all the more fun. Instead of your old standby, you might try the hoppy Surly Furious ($4), which seems to go well with every burger on the menu. If you’re in the mood for something more exotic, the He’Brew Jewbelation ($6) oozes dark chocolate without a trace of bitterness. If you’re beginning with appetizers, however, a nice glass of dry white Gyslersilvaner Halbtroeken ($6.5/24) sets an appropriate tone.

Yes, it’s a burger joint, but unlike any you ever have been to. Instead of creating a merely serviceable beefwich, where the only variable is where to put the cheese, The Blue Door treats burgers like a proper entrée, and the results are undeniably fantastic.

We tried the Cheese Curds ($7.50), which are beer-battered, fried, and served with marinara.

Then, curiosity got the best of us when it came to the fried Spam Bites ($6.50). Co-owner Jeremy Woerner let it slip that they were invented during a prolonged bender, and what easily could have gone wrong—betwixt the Spam, cream cheese, and pickles—went oh so right. An accompanying chili lime sauce has a mild kick to it, and you can drizzle it liberally. If your “bite” is similar to mine, you’ll have to go at it with a knife and fork, as it’s very large. But if you can fit all that in there without looking like a hamster, then kudos to you.

The Jiffy Burger ($7.75) was our first taste of what quickly solidified The Blue Door’s reputation throughout the Twin Cities. I can’t say that the combination of peanut butter and bacon would have been first on my to-try list, but I thought I’d give it the benefit of the doubt. I’m glad I did—the peanut butter actually mellows the brightness of the thick-cut bacon.

If you are dining with friends, recommend that someone order the Cowboy Bacon Blucy ($8), which is essentially a bacon-cheddar cheeseburger with homemade spicy barbeque sauce and fried onions. It’s a take on the Juicy Lucy, only the bacon also is tucked in along with the cheddar. It was our table’s favorite, and served along with hand-cut fries ($2), it can’t get much better.

One has other options for accompaniments at The Blue Door: tater tots ($2), or beer-battered green beans ($3). We tried the latter, which I absolutely would order again—the batter was very light, and one still could taste the fresh bean beneath.

Though I had heard wild tales about the Merriam Park Burger ($7.50), I’m very glad we were able to try The Bangkok Blucy ($7) instead. The result of an in-house burger-off, it manages to merge authentic Thai flavors with the American staple, and come out on top. Coconut milk-soaked mozzarella does the trick, assisted by pickled carrots, red onions, ginger, and a fragrant curry dipping sauce.

For those who still have room, The Blue Door offers Pie Bites ($6.50) for dessert. Resembling little donut holes, these petite fried cheesecake sensations are all the goodness of the State Fair without the paper pig ears.

If an after-burger beer is more to your liking, either the husky Summit Oatmeal Stout ($4) or the Imperial Brown Goose ($6) would do quite nicely. Woerner warned me that the Goose has an odd smell–and it does—but it tastes like caramel thanks to a good soak in old Jim Beam barrels.

Speaking of a good soak, you might wish to practice temperance with some of the beers: Several varieties pack an extra punch. But I’m not complaining.