She’s fun. I mean really fun. She’s witty, talented, and beautiful without a doubt. In all honesty, I doubt the woman has the ability to frown. Her plucky personality and general happy-go-lucky attitude are genuine and refreshing. 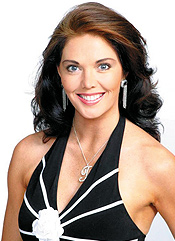 We had lunch at one of her favorite hideaways, a quaint Asian restaurant near Bloomington. We met to get acquainted, and to discus the upcoming debut of The Tawnja Zahradka Show Saturdays on The CW.

Having been in television for the past 13 years, this woman has developed an amazing onscreen persona, or so I thought. Yet, the person I was sitting across from was the very same person I saw on screen.

One of the first things on my mind was her name, exotic sounding. But I stood corrected. Born and raised in North Dakota farm country, she shrugged it off by saying that it was a common name, easily pronounced back home. Not so in the Cities.

“People think I made it up,” Zahradka beams.

In fact, she has made a game of it. She has had all sorts of people give her name a go.

As Zahradka relates, “We just talked to Vikings coach Brad Childress. I handed him a card that said: ‘You’re watching The Tawnja Zahradka Show: Go Vikes.’ We’re going to edit those little montages, and play them throughout the show—of them screwing it up.”

Zahradka’s aspirations of stardom began early. She always wanted to be on TV. Her first break came from an unsuspected place: a new idea, a proposed 24-hour network dedicated to St. Paul, outlining the sights and attractions for residents and tourists alike. She answered an ad in the newspaper, a call for writers, producers, directors, and on-air personalities.

As Zahradka recalls, “I was just in Minnesota. So, I answered the ad, and ended up getting the job.”

It seemed like everything was fitting into place. But three weeks after starting, the owners of the network decided to abandon the idea for something more lucrative.

“They invited us into a room, and told us, ‘You’re all fired. We’re going to start a furniture store,’” Zahradka recounts.

She collected her tapes, and hit the road.

Through a combination of luck and determination, she broke from the network, and with the directors and producers, bought time on cable access to debut their own show, The Minnesota Experience.

Since then, Zahradka has been a machine, eventually shifting programming from cable access to The CW. With the move came a name change, to Tawnja AM.

Elated, Zahradka tells me her dreams are coming true. Close to tears, she expresses her happiness over her success and fan base. She is living her dream. Once again a new chapter has begun, and she is determined to make the most of it, for your viewing pleasure.

In addition to being a local television personality, Tawnja Zahradka is a regular contributor to Lavender. Look for her column in the Fashion section every other issue. Watch The CW Saturday nights immediately following Sex and the City for her own blend of Leno laughs and local flavor.